It took a drive through and beyond the cluttered streets and busy storefronts of Durban, South Africa – plus passage through a gated wall – to discover my 2015 “Hotel of the Year” award winner: “The Oyster Box.” 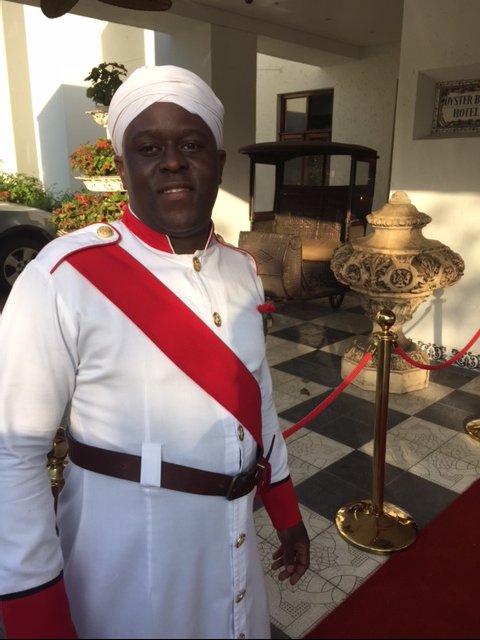 The property, which upon red carpet entrance feels like a hidden, diplomatic embassy, could well have been called “The Jewelry Box” as it feels as delicate, intricate and precious as one. But its’ Oyster Box name hints at the 1930’s-era, recently refurbished, 86-room boutique hotel’s beachfront perch. A glamorous infinity pool, for those who don’t want their toes in the sand, overlooks the Indian Ocean and the scenic Uhmlanga Lighthouse; but watch your feet when you’re standing in the Oyster Bar, because the glass floor reveals a private chef’s table for up to 10 diners in the wine cellar below.

Prefer to be sky high? The Lighthouse Bar on the roof, under red and white-striped canopies, presents a 180-degree, open-air view of the coastline – once you step out of the dark wood, leather chairs, and hardwood-floor of the interior speakeasy. I can write words like “speakeasy” to define the Oyster Box because it truly transports guests to a time of elegant comfort and now uncommon civilities such as serving guests arriving at the front desk next to the swirling grand staircase a glass of champagne – that’s after they step over the house tabby cat lazing next to the rickshaw and have been greeted by traditionally-uniformed doormen. High tea with colorful macaroons and plentiful pastel pastries is served daily amidst the foliage in the Palm Court atrium.

Each public room, including the African adventurer’s club-style library, is a genteel but dramatic setting giving the appearance of international intrigue and whispered stories, such as the time, in 2011, Prince Albert of Monaco and his South African bride Princess Charlene, honeymooned at The Oyster Box. Russian President Vladmir Putin’s photo (he stayed in 2013), adorns a back hallway display of famous (infamous?) guests. 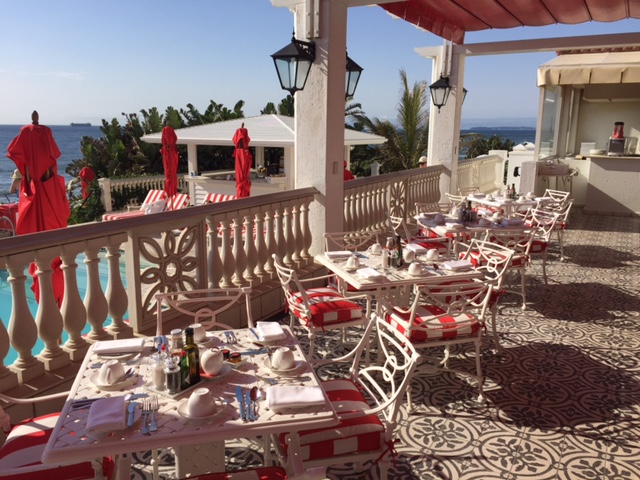 Unwanted – but unavoidably tolerated – monkeys sometimes make brief guest appearances on the open-air tables of the relaxing, Mediterranean-inspired, Ocean Terrace attempting to snatch a bread roll or a sugar packet. If only the little devils knew what they were missing with the elaborate nightly Curry Buffett, which features at least 11 curries daily, including Lamb Vindaloo; Singapore Fish; and Durban Chicken and Prawn, cooked in Tandoori ovens.

The guestrooms are spotless and bright, with small touches such as soap presented on a seashell. The spa is also an exotic experience via a traditional oriental hammam and sensation shower. The pet-friendly hotel offers a cinema screening room; kid’s club and chauffeured rides to locations around town, including Durban Country Club, but I  nearly wept with grief each time I had to leave the Oyster Box, even for a short time, on various investigative sightseeing pursuits. The Oyster Box is not a showstopper. It is the show.