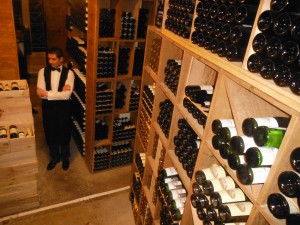 Inside the wine cave at the Four Seasons George V Paris - home to 50,000 vintage bottles. (Photo by Harrison Shiels)

Are French wines the world’s best? Cliché or not, the answer, historically, has always been: “Oui, monsieur!” But I posed the question to Nicolas Charriere, a sommelier at Le Cinq, the exquisite culinary experience inside the luxurious Four Seasons Hotel George V in Paris. He leaned in close, and after careful thought, whispered dramatically, “It is difficult to say because there are very good wines from around the world. For instance, if I had one bottle remaining to drink at the end of my life, it would be a German Riesling.”

Mon dieu! But it’s not heresy, according to sommelier Estelle Touzet, who also demurred from insisting on French wine superiority. She’s served wine in the hotels at opposite end of the Champs Elysees, including the Crillion, Bristol and now Le Meurice’s gastronomic restaurant. “I would choose a dry Riesling as well. It’s not considered fashionable but Riesling is a favorite of sommeliers because it is well balanced and low in alcohol,” she said while pouring a glass of 2011 Austrian Gruner Veltliner to be paired with roasted fois gras and a warm oyster in an ornate dining room meant to resemble the belle époque styled Peace Salon in the Palace of Versailles.

Back in the elegant, flower filled, Four Seasons near the Arc de Triumph, Charriere’s wine pairings, one of seven during dinner at Le Cinq, including a 1984 Madeira Verdelho from Portugal to accompany Chef Eric Beaumard’s pigeon in a cereal crust with spicy foie gras and preserved turnips in pomegranate molasses and pearly juice, the main course of eight, are astonishing. Is his talent science or art? Charriere, who was raised in France’s Loire Valley, prefers to call it “passion.”

Three floors below Le Cinq the temperature is 52-degrees Fahrenheit with 60-percent humidity in the Four Seasons George V’s wine cave. Built in a former stone quarry in 1928, it’s now the dark, secret home to 50,000 bottles, even some from Napa. Victor Piteot, a 23-year old being trained by head sommelier Thierry Hamon, has learned the magic of proper pairings includes factoring in the dining event, time of day, mood of the customer, budget, and other perceptions. He then showed me a bottle of 1811 cognac and a bottle of port dated 1795. At last, though, evidence of a partisan Parisian! A businessman who visits the hotel eight times a year, described by Piteot only as “a very nice guest,” is so devoted to French wine – a vintage Petrus Bordeaux, to be specific – that the Four Seasons not only procures it but also displays his 120 empty bottles on the wall in the cave because he likes to come down and view his handiwork, a loyal devotion to French wine and France’s best hotel estimated to have totaled bills for him beyond the billion Euro mark.