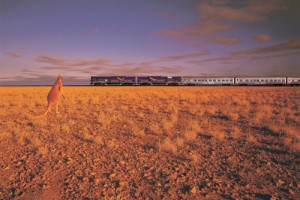 ADELAIDE, South Australia – I write this column as I am rolling across the Australian Outback aboard the Indian Pacific Train on a rail line which stretches 4,352 kilometers from Perth, along the Indian Ocean in the far west, to Sydney, near the Pacific and the Great Barrier Reef, in the east. In between typing sentences from a small desk in my private sleeper cabin, I glance out the windows to catch glimpses of a vast sky which meets a horizon of deep red soil, thatched dry grass, the occasional brave tree, and distant, rising buttes. Kangaroos, wallabies, koalas, dingo, emus and wallabies are at home out there, despite Darwin’s claim that the Land Down Under is “unfit for man or beast.” The soft rumble and clack of the track make for nice company, too, and are especially soothing when it comes time to pull down the berth and snooze. Under dark of night a crescent moon and star show is visible from my bunk, with morning announced by a fiery orange cloud bank and pink, smoldering sky.

In the snazzy lounge car, the bespectacled train manager is a caricature of his position – stopwatch, handlebar mustache and all. He introduced me to an 84-year-old Australian woman namedVictoria who made for fine dinner company, recalling the “American boys” during the war before the festive “Waltzing Matilda” sing-along, of course, with an oil can of Fosters Lager for inspiration.

Perth to Sydney is a three-night trip, but you may also board in picturesque Adelaide – near Australia’s wine country – which would give you just under 24 hours aboard this charming timepiece after perhaps a visit to the famous wineries of the Barossa Valley such as Jacob’s Creek and Penfold’s. You may tote your car aboard the train, if you wish. Between Adelaide and Sydney there is a happy hour stop in the arid mining town of Broken Hill. Take a two-hour stroll or shop in the town so remote scenes for post-apocalyptic film “Mad Max” were shot here. 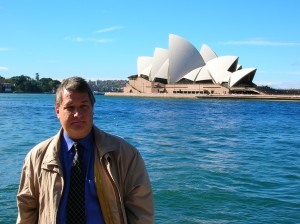 Arrival in Sydney and the sight of the iconic opera house. The architect never lived to see it finished.

Pulling into Sydney Central Station in midmorning was bittersweet. Like a child, I wanted more of the train, but then, wide-eyed, I spotted the stark, white billowing peaks of the world famousSydney Opera House and the iconic Harbor Bridge, and the thrill of Sydney took over.

To make the Indian Pacific Rail part of your adventure to Australia, log on to www.GreatSouthernRail.com