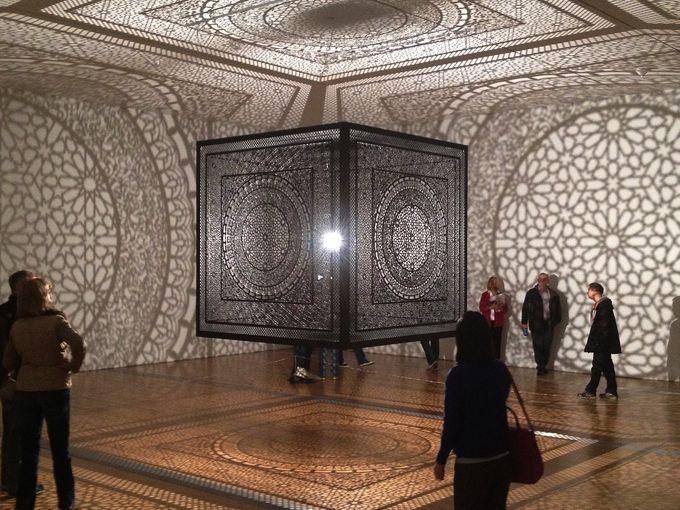 “Intersections” won the public vote and tied for the juried top prize in 2014 Courtesy: ArtPrize.org

Until now when people in Michigan thought “art fair,” they likely thought of Ann Arbor’s giant elephant ear and crafts event each July. But now Grand Rapids has upped the ante and stolen the show. Chic, disruptive, and unorthodox are the typical descriptions of the madness known as “ArtPrize.”

ArtPrize converts Grand Rapids into a free, city-wide, indoor-outdoor gallery September 23 – October 15 when over 1,600 artists from 48 countries, hope to earn the approval of the voting public and a panel of expert critics to win a share of the world record half-million-dollars in award money. They will do so by displaying, and sometimes manning, their inspired creations at 160 venues within a three-square-mile area of downtown. “It’s an incredibly energetic combination of art museum, street fair, and public forum on ‘what is art?’” says Tom Kaufmann, from Traverse City, who has entered twice – camping out with his interactive musical exhibits throughout the entire three weeks of competition to greet and talk with potential voters.

“Everyone participates by voting on smartphones for the works they like best. You can get great conversations going because no one has a monopoly on meaning,” says Dana Friis-Hansen, director of the Grand Rapids Art Museum. “Come whenever you like. Wear comfortable shoes, apply sunscreen, get a map and pick your priorities. Start at the center and work your way out.”

Rick DeVos, grandson of Amway Corporation founder and billionaire Rich DeVos, founded ArtPrize. Rick’s father Dick ran for Michigan Governor. “I am blessed to come from a family of doers and people who are always talking about ways to create value in the community, says DeVos. “The family dinner table taught me how to dream big. I was a constant eavesdropper when a meeting was going on so I could listen and learn.”

Greg McNeilly, who has an office in the city, says even while stopping for a bite to eat you’re likely to experience an instillation. The art, whether it’s a mural, sculpture, or paining, is everywhere. The inaugural Art Prize winner (2009), a mural of waves dubbed “Open Water,” rolls in above the bar at The Reserve, a chic farm-to-table eatery with a magnificent wine list. Those waves may be seen for real at the sandy, shark-free, freshwater beach and pier perfect for a Lake Michigan sunset 30 miles west at Grand Haven State Park and City Beach.

During ArtPrize the artists, and the voters, are the toast of the town!

Michael Patrick Shiels may be contacted at InviteYourself@aol.com. His talk can be heard and seen weekday mornings in Lansing on 92.1 FM.