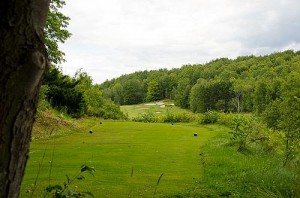 A huge amount of “imaginary travel” takes place in early April when, during the Masters Tournament, golfers dream of rolling up Magnolia Lane to the highly exclusive Augusta National Golf Club. Tom Doak has been there, but then again, he’s been everywhere. And the internationally acclaimed, Traverse City-based golf course architect, who has walked every inch of Augusta National, is about to stroll into the Michigan Golf Hall of Fame.

“High Pointe was not conceived to be one of the great golf courses of the world. It was conceived as a place that was a really nice piece of land to build a golf course on and a relatively affordable place for people to come and play,” he explains.

“It is the most difficult course I’ve ever built and I realize I’d gone too far. But just because my philosophy changes it doesn’t mean I want to go back and re-do everything. When I created Black Forest in the late 1980’s, all the new courses in Northern Michigan, such as The Bear and Treetops, made a point in their advertising of touting how difficult their courses were.” Doak’s clients at Black Forest didn’t want to hear anyone say their course was “too easy.”

“Whatever Black Forest is, it is not ‘too easy,’” Doak says.

New Zealand, Tasmania, Scotland, Australia, Costa Rica, the Caribbean, and, domestically, Arizona, Florida, Colorado, Myrtle Beach, and the Hamptons are far-flung locations of construction sites-turned acclaim-winning golf courses that have kept Doak on airplanes instead of breathing the fresh, clean air of his home soil.

“Some of my best thoughts about a course I’m working on have come while I was on the plane coming home, when I am just resting and have nothing else to do. I get some time to think about it without having to worry about other things,” Doak says. Doak has personally visited more famous – and not so famous – golf courses worldwide than any human alive, tagging along with his father on business conferences at resorts as a kid. “Then I began sending letters to golf club managers and superintendents of famous golf courses asking them if I could come and examine their golf courses.” The result was a lifetime of footprints in the dew of fairways across the globe.

“I travel 180 days a year, so home is ‘part time’ for me,” he admits. “It’s particularly troublesome because, especially in the summer, Traverse City is such a great place to live.”

Doak is a citizen of the world, and soon to be a member of the Michigan Golf Hall of Fame.