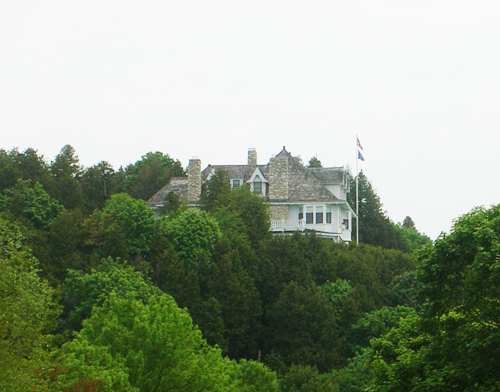 MACKINAC ISLAND, MI – Mackinac Island recently played host once again to the annual Detroit Regional Chamber Policy Conference, a three-day stretch when the island’s visitor population shifts from a typical majority of happy tourists to a collection of 1,400 business leaders, politicians, lobbyists and media members. Governor Jennifer Granholm, a democrat; and United States Congressman Pete Hoekstra, a republican from the Grand Rapids area who is campaigning to succeed Granholm, participated in the conference on the island.

During the 17 years Hoekstra has served as a U.S. Representative, he has become known as one of the “Capitol Phantoms” because, rather than pay for a house, apartment, or condo for the midweek days he spends working in Washington D.C., the thrifty Hoekstra has chosen to live in his office, sleeping nightly on his office couch.

Granholm, as Michigan’s Governor, enjoys not only the privilege of occupying the Governor’s Mansion on the river in the Moore’s River Drive area of Lansing, but also seasonal use of the Governor’s Summer Residence –  a picture-perfect, white, traditional American antique classic on a scenic bluff overlooking all of Mackinac Island.

Hoekstra, just down the bluff inside the Grand Hotel during a forum of gubernatorial candidates staged at the Mackinac Policy Conference, was asked by veteran Capital reporter Tim Skubik, whether, due to the economic malaise, the State of Michigan should consider selling off the Governor’s Summer Residence.

Moments later, Governor Granholm described the idea as a political gimmick. “The reality is that is not going to solve our problem. The residence on Mackinac is open for tours for people to come and enjoy when they are on Mackinac Island,” Granholm told me via telephone.

Later in the lobby, Lieutenant Governor John Cherry, who is also running for Governor, insisted it was too presumptuous for him to be picking out drapery patterns just yet, but nevertheless defended the Governor’s Summer Residence.

“Mackinac Island is a State Park. (The residence) is part of Michigan’s heritage. The citizens own it. I don’t think they want to sell what’s great about Michigan. The idea was around a couple of years ago and the public rejected the idea,” Cherry said.

Mackinac Historian Carl Nold, on the island’s website, confirms that the residence was built as a private residence in 1902. In 1944, with the support of the Michigan Legislature, the Mackinac Island State Park Commission was authorized to purchase the home for $15,000, renovate it and convert it to what was, at the time, the only State-owned Governor’s Residence. In 1997 the home was named to the National Register of Historic Places. Donors and the State Park Commission maintain the white pine structure.

During weekly tours, visitors and tourists are shown a portion of the residence, which has three stories, 11 bedrooms, nine-and-half baths, a basement, a garden and a large porch.

Dignitaries, including U.S. Presidents, have been guests in the residence, but actually staying in the home is a rare and priceless occurrence. From the porch, residents enjoy sweeping views of Grand Hotel to the far right, and, in the distance, the Mackinac Bridge dividing Lake Huron from Lake Michigan. It is easy to spend the day mesmerized by the scene, gazing at the ferryboats taking tourists back and forth from the harbor below across the strait to Mackinaw City or St. Ignace. Yes, you can, in fact, catch a whiff of the fudge from the shops below when the wind is just right. And when the wind is strong, the wooden-framed windows throughout the delicate, old home sound a startling cacophony of rattling and banging. 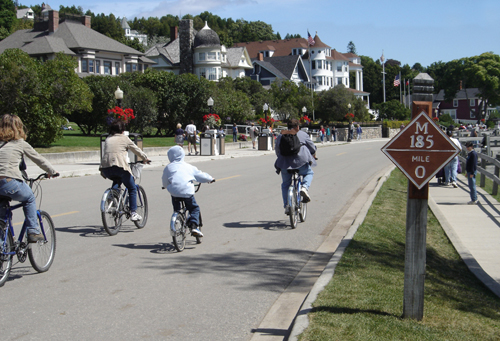 The various bedrooms, connected with narrow, dark hallways and sometimes creaky staircases, are individual and quaint in their décor – and it is fun to ask in which bedrooms various notables chose to bunk. Similar to what I imagine a White House stay to be like, the house’s staff of two, a caretaker and a chef hand-picked by Michigan’s first family, will prepare any meal desired.

The basement houses bicycles – a necessity on the island – and there are various circuitous downhill routes which make for a wandering, zippy ride all the way into town without even pedaling. Getting back up to the Residence therefore is obviously a cardio experience, but the excitement, honor, and novelty of being there is enough to have your heart beating, anyway.

Former Massachusetts Governor Mitt Romney visited Mackinac Island to attend a Republican leadership conference two summers ago while he was running for President. During his speech he spoke fondly of the number of youthful summers in the Residence when his father George was Michigan’s Governor and admitted how much he would love to have taken a nostalgic walk through the old house – had its occupant at the time been a Republican.

The Governor’s Official Summer Residence has factored into more than one potential candidate’s decisions to give in to the temptation to run for the office.

“I would love to go up there for the month of July with a big pile of books and just let everyone come to me,” one legislator confided to me in a private conversation. Still another, seated next to me atop a ferryboat, looked longingly up at the bluff before saying, “I’d like to imagine myself someday in that big white house. But there are a lot of people waiting in line in front of me.”

In case you don’t aspire to be Governor, free tours of the residence are offered Wednesdays from 9:30 – 11:30 in June, July and August. Visit www.MackinacParks.com