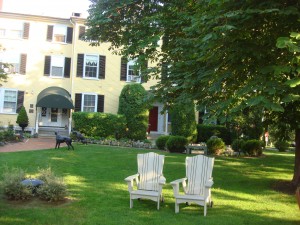 Captain Lord Mansion looks too charming to be real!

The former President, whom the locals call #41 since he was America’s 41st Commander in Chief, and his first lady make regular appearances around this quintessential northeastern seaboard town. The family estate is plainly visible across a small cove on Walker’s Point, a rocky crop of land which juts into the Atlantic parallel to the shore. So many people pull their cars over on Ocean Avenue to admire the view of the Bush home and take photos that subtle benches and viewpoints have been created. The Secret Service guardhouse sees to it that people do not have access to Walker’s Point, but you can see Bush, who is 86, climb into his 38-foot speedboat, named Fidelity IV, and hit the gas for a cruise up the coast or even into town for lunch at Mabel’s Lobster Claw or Federal Jack’s Restaurant. A smaller, black Secret Service boat trails along behind Bush and his passengers until they arrive home safely.

“The former President and First Lady are pretty visible in restaurants. You usually would not see him in the shops and boutiques and art galleries, but in restaurants, sure,” says Rick Litchfield. He and his wife Bev Davis operate Kennebunkport’s most charming bed-and-breakfast, the Captain Lord Mansion. “Very frequently I’ll be talking to our guests who will say, ‘Oh, we had dinner with George and Barbara last night!’ which really means that George and Barbara and their Secret Service entourage were in the same restaurant.”

What is the protocol if you should find yourself in the company of the Bushes?

“George is very convivial, he’ll come around and shake hands with people, doesn’t necessarily give autographs, but he will welcome people in the restaurants, which is really quite a nice thing,” says Litchfield. “He is genuinely a nice person. I’ve met him on occasion at functions in the Kennebunks here and he truly is a man of good character and warm sensibilities. He truly is a wonderful elder statesman for the United States.”

Litchfield’s Captain Lord Mansion is a stately Federal home – circa 1812- and on the National Register of Historic Places, along with a carriage house and captain’s quarters. 16 luxurious rooms with fireplaces and four-poster, canopied beds make it difficult to emerge for the delicious three-course breakfast included. The romantic and friendly inn is in the center of Kennebunkport’s action, overlooking the Kennebunk River, but its’ grassy, maple tree-covered gardens and manicured landscaping serve as a peaceful buffer. Guests can easily stroll into Dock Square for shopping and dining.

“We have some beautiful white, sandy beaches and we’ve got the rocky coast line. In the summer time you can do so much: there’s bicycling as well as whale watches, and we have sailing cruises on old windjammers,” says Litchfield of Kennbukport, which is 90 miles north of Boston and 30 miles south of Portland, Maine. “We have a package at the Captain Lord Mansion were you can even go aboard a lobster boat cruise, harvest the lobsters, and have them for dinner.”
Don’t forget the blueberry pie – Maine is famous for that, and the “lobster roll.” 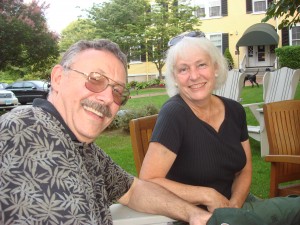 Masters of the House: Innkeepers Rick and Bev Litchfield.

“It’s basically a hot dog bun with lobster and mayonnaise in it,” explains Litchfield, who also says Maine is known as “down east” because that was the prevailing wind in the days of schooners, which, when you’re standing in Kennebunkport, doesn’t seem that long ago. The state slogan is “Maine – the way life ought to be, but why are people from Maine called “Maine-iacs?”

“Because I think some of us are,” laughs the amiable Litchfield, who took a turn as president of the Kennebunkport Chamber of Commerce.

“October’s ‘Pumpkinfest Weekend’ is fun, as is our Halloween Weekend at the inn; and December’s ‘Christmas Prelude’ is straight out of Currier and Ives, with Santa arriving by lobster boat,” says Litchfield.

President Bush’s beloved Cape Arundel Golf Club, founded in 1896, is virtually a family heirloom, having hosted generations of Bush’s, including “41” and the 43rd President, George W. Bush. President Bill Clinton has played as a guest, as have many PGA Tour players and celebrities.

“Phil Mickelson holds the current course record of 60,” says Ken Raynor, Cape Arundel’s longtime head golf professional and member of the Maine Golf Hall of Fame, who once held the record himself. Cape Arundel, redesigned by the famed Walter Travis is 1923, and restored by Traverse City, Michigan’s Bruce Hepner in 2006, is an antique, historic course with a refreshingly casual, screen-door clubhouse. Playing the course is like walking back in time.

The public is welcomed but reservations are required.

And as for my hope to spot President Bush? I inadvertently sat in the front pew with “41” and his beloved wife Barbara at Sunday morning services. Coincidentally, the Reverend M.L. Agnew’s seaside sermon that morning was based on the Gospel of Luke’s verse: “Ask and it will be given you…for everyone who searches, finds.”

Whether you run into President Bush or not, Kennebunkport is a terrific tourist find all year.

Michigan-based travel writer Michael Patrick Shiels may be contacted at InviteYourself@aol.com or viawww.TravelTattler.com.