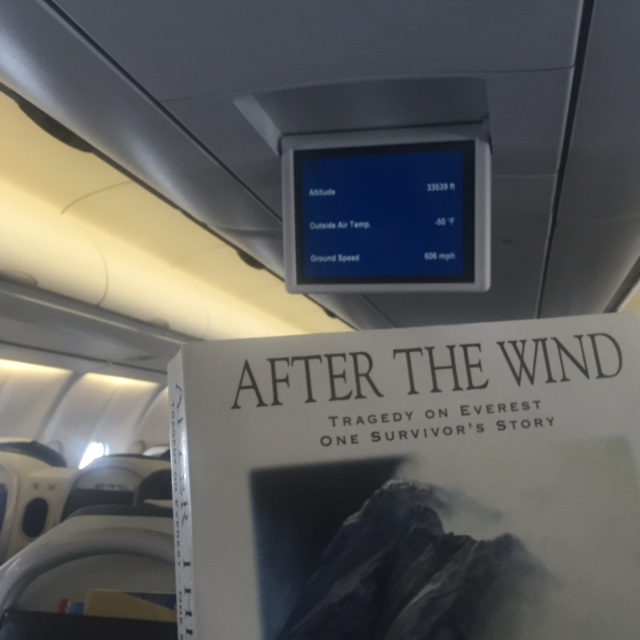 The Michigan author’s amazing adventure story took him sky high, where I was reading his book in comfort

It was 50-below-zero Fahrenheit in the sunshine when I reached 29,000-feet of elevation and could see for miles. I wasn’t too uncomfortable, though, since I was in a partially reclined window-seat of a Delta flight. Lou Kasischke, though, had experienced those six-mile high conditions without a climate-controlled, cabin-pressurized airliner to protect him. During the flight I was reading his new book, “After the Wind…Tragedy on Everest; One Survivor’s Story.” It sat on my tray table next to some pretzels and a Bloody Mary. Kasischke, a Michigan State University alum who lives in Northern Michigan, survived, along with a few others, the fateful 1996 summiting of the world’s tallest mountain that resulted in the deaths of 12 of his fellow climbers.

As I read, in my cushy convenience, about the punishing conditions of climbing that high, the irony struck me. I could only imagine what Kasischke, who was trapped up there freezing for nearly three days without food or water (and temporarily robbed of his sight), would have given for a single melted ice cube from my cocktail. I held up his book and snapped a photo of it next to the plane’s altitude display screen and emailed it to Kasischke. He wrote back: “Look out the window at the clouds below and think about how smart you are to be inside and not outside. That temperature was about the same, too.”

Kasischke’s wife Sandy would heartily agree with him. Both her trepidation and her devotion to him are described – and even documented – in his very honest book, because in addition to Everest, Kasischke climbed the highest mountains on each of the seven continents while simultaneously achieving a successful business career.

“After the Wind” reveals that while the final 12-hour push the summit gets all the attention, the entire journey up Everest takes a minimum of six weeks of trekking and acclimatizing at various elevations in third-world conditions and the same clothes beginning at 4,500-feet in Katmandu, the capital of Nepal, after flying from Detroit to Tokyo and connecting through Bangkok. Only the very final portion of summiting Everest is technically even on Everest.

“We live on a high bluff overlooking Lake Michigan where high winds frequently hammer the shoreline, so I set up a tent there to train in the dark and melt snow for water,” writes Kasischke. He also had a close call with a mother bear and her cubs while training all night climbing the nearby Boyne Highlands ski area in the dark. The summit of Boyne Highlands, via chairlift, is 1,290 feet; Everest, via superhuman endurance: 29,028 feet.