The dictionary defines the word “grand” as “impressive in size, appearance, or general effect; stately, majestic, or dignified; magnificent, splendid, noble or revered.” The hotel industry, more than any, seems to have adopted and embraced the word grand. While the world’s major cities often have historic hotels which are grand, some of these elaborate palaces have gone so far as to put the word in their name. Hyatt has even attached the word to the front of all its more upscale properties, including the Grand Hyatt Dubai. Grand hotels exist in Katmandu, Iran, Sapporo, Sri Lanka, Vienna, and other world destinations, but some memorable beauties are closer to home. 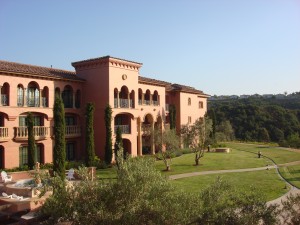 Grand Hotel, a white, wooden icon, looms over Michigan’s timeless Mackinac Island from a commanding bluff. Grand Hotel, celebrating its 125th anniversary, sets the antique tone for the summertime tourist island where the only vehicles are horse-drawn, and guests, who dress for dinner, dine and dance to live orchestra music. The world’s largest porch affords views of Great Lakes Michigan and Huron, and the delicate “Mighty Mac” suspension bridge which both divides the lakes and connects the state’s upper and lower peninsulas.

“100 years ago there were 1,200 of these grand, wooden hotels built in Americaby railway companies to encourage tourism. Now there are only 12 left,” said Bob Tagatz, who serves as Grand Hotel’s historian and concierge.

Michigan’s other grand hotels include the Amway Grand, in Grand Rapids, originally opened at The Paintlind in 1913 but refurbished and renamed in 1981. The hotel, in the middle of downtown, is decidedly corporate and businesslike, but does offer some reminders of its’ elegant and plush history when guests walk into the original lobby through the Monroe Street entrance, but most use the Pearl Street valet entrance. Visit www.AmwayGrand.com or call (616) 774-2000.

The Grand Del Mar, a just north of San Diego, is a modern classic – a sprawling, tasteful palace of Mediterranean elegance featuring Addison – Southern California’s only five-star, five-diamond culinary experience. Two Tom Fazio-designed golf courses tumble into and climb above the canyon below the gated estate and provide vistas for the resort’s stately swimming pool areas. Visit www.GrandDelMar.com or call (855) 314-2030.

Disney’s Grand Floridian Hotel, in Orlando, is actually a replica of San Diego’s beachfront Del Coronado Hotel which, for all its historic glamour, has seen better days. Disney’s red-roofed, white-walled, period piece version, complete with a lobby orchestra, is right next to the Magic Kingdom on the monorail track and very well suited for conferences and weddings. Visit www.DisneyWorld.go.disney.com or call 800-W-DISNEY for a grand time.

Michigan based travel writer Michael Patrick Shiels, a Downriver native, may be contacted atInviteYourself@aol.com or via www.TravelTattler.com