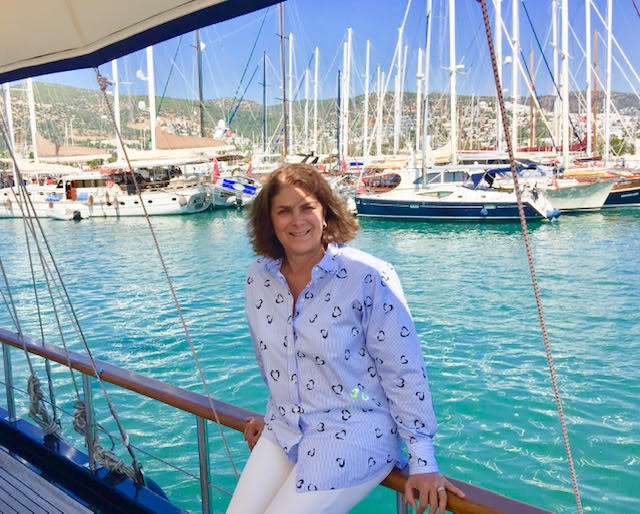 Turkey is in the news lately and not just because Thanksgiving is approaching. While Cromwell’s Turkeyville is a popular tourist attraction just down I-69 near Marshall, Michigan, the Republic of Turkey has become home for Karen Federko Sefer, who was born in Lansing, Michigan.

“I was born in Sparrow Hospital,” said Sefer, founder of Sea Song Tours, a Virtuoso.com travel provider based in Istanbul. “I went to Turkey, met my husband, and opened my business bringing travelers to Turkey for exploration and cruises.”

Turkey recently launched military operations in bordering northeastern Syria – far from Istanbul – but in June of 2016 Istanbul’s Ataturk Airport endured a terror attack during which gunmen and bombers killed 45 people. Six months later, a gunman killed 39 people at a nightclub. Lansing’s Patrick Anderson, of Anderson Economic Group, does business in Turkey. He was in the city during that Ortakoy neighborhood late-night attack and has returned to Istanbul since.

“We have recovered from the problems of the past. It is business as usual in Turkey,” Sefer insisted. “We have a tremendous amount of people coming to Turkey. There are increases in the amount of tourists, particularly from the United States. Everybody feels safe and happy.”

The U.S. State Department, in terms of travel security, lists Turkey as “Level 2” – meaning tourists and business travelers should exercise increased caution by sticking to locations frequented by Westerners; avoiding demonstrations; and staying in hotels with identifiable security measures – the type of lodging properties Sefer identifies and books for her clients.

“Our guides take travelers from the airport directly to their adventure,” Sefer explained.

Istanbul and the Turkish Riviera have long been popular holiday destinations with Europeans. Travel for Britons, for instance, has not been restricted but travelers are advised to avoid Syrian border areas.

Istanbul, formerly Constantinople, is historically rich. Half of the evocative city is in Europe while the other half lies, via ferries and bridges, across the Bosporus River. It’s a secular country but the Muslim “call to prayer” can be heard across the city multiple times each day.

“Istanbul is a dynamic, chaotic inspiring place where you can learn about and experience the Ottoman and Byzantine Empires. It’s a beautiful city in which visitors can go into the neighborhoods to understand the culture and mingle with the locals. Their average age is 29,” said Sefer, whose tour company enjoys special access to Istanbul’s most intriguing and therefore popular sites such as the Blue Mosque, Cisterna Basilica, and Maiden’s Tower. “Sea Song Tours can also open the Hagia Sophia at night. We can lead guests into the Topkapi Palace when it’s usually closed. These are very personal ‘wow’ experiences.”

“The Turkish Bazaar an unbelievably lively and colorful place to go hunting for treasures. The 007 movie ‘Skyfall’ was filmed there and we can even take people up to the roof and show people where James Bond stood,” said Sefer. Maiden’s Tower featured prominently in the Bond film “The World is Not Enough” and most of “From Russia with Love” was set in Istanbul, including the Cistern, which was also seen in “Inferno” starring Tom Hanks. Liam Neeson’s “Taken 2” was also filmed in, on and around the bazaar.

“In other parts of Turkey you can float in a hot air balloon across the countryside or go down to Bodrum enjoy the crystal clear water of the Turquoise Coast on a yacht or a wooden boat which allows you to cruise along the coast and visit with locals in villages and see ruins,” said Sefer, who admits history comes with luxury. “The Virgin Mary is said to have died outside of Ephesus and three Popes have been there. St Paul was born in Tarsus.”

Those interested in visiting Turkey for historical purposes or to experience the beach and boating experience can contact Sefer directly with questions via email at Fedorko@Seasong.com or she can be found via Virtuoso.com.