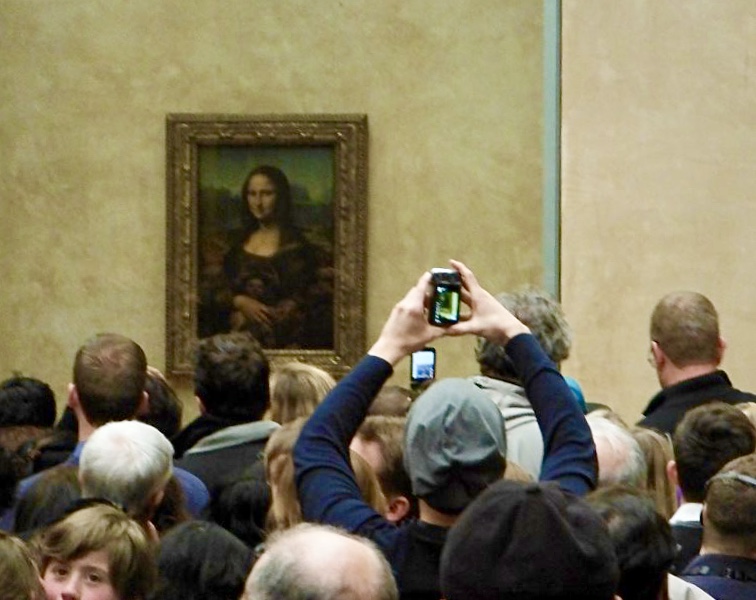 Mona Lisa smiles at the lines of casual art tourists corralled in the Louvre
Photo by: Harrison Shiels

The price of some masterful works of art may be out of this world, but enjoying and collecting art is not rocket science, thanks to an art lover who first spent part of his career working on NASA’s Apollo moon landing program. Albert Scaglione left the space race and went on to found Park West Gallery in Southfield, Michigan in 1969. Park West has since gone into orbit as the world’s largest dealer of art. More than 2-million customers have purchased hundreds of millions of dollars worth of masterpieces and contemporary creations from the 63,000 square-foot gallery and museum on Northwestern Hwy which is open for free public and educational visits.

“Our museum is amazing. We have the world’s largest collection of ceramics on display. We’re international so we show Picasso but also some great Detroit artists such as Dominic Pangborn, Tim Yanke and Marcus Glenn,” said Scaglione, 80. His Park West Foundation once sponsored a single-painting exhibition at the Detroit Institute of Arts featuring “’Rounded Flower Bed,’” by Claude Monet. One of the impressionist’s “Haystacks” paintings recently sold for $110-million. “It’s not a particularly surprising price because Monet’s paintings are rare…but it is heavy money.”

Scaglione traveled to France to visit the home of Monet and his gardens in Giverny. “Monet’s paintings are full of color and feeling and romance. Art was changing in his time and breaking from the rigid form and Renaissance structure of works like Leonardo da Vinci’s “The Last Supper” and “Mona Lisa.’”

While dealing with the intrigue of Russian oligarchs and Arabian sheiks, Scaglione has also enjoyed many trips to the world’s most esteemed art museum – the Louvre, in Paris, where paintings worth as much as $450-million and some priceless, are displayed, including the “Mona Lisa.”

“10 million people a year go to the Louvre and sometimes 30,000 per day wait half-an-hour through a queue system to view the ‘Mona Lisa.’ It’s not a large painting. It’s tiny. Sometimes people see it and say, ‘Wow is they what they’re talking about?’” But it’s the real deal and well worth the experience,” said Scaglione. “I have had the joy in my life of having a lot of time on these eyes looking at her face-to-face. It is kind of a shocking experience. You walk around looking at the other paintings and nothing ever looks like it again.”

Scaglione described da Vinci as a businessman and a revolutionary genius who, 500 years ago, also drew parachutes and airplanes and tanks. “I remember in Amsterdam when you could still buy a da Vinci drawing for thousands of dollars. You can’t do that anymore.”

When in Paris Scaglione said he stays at Hotel Le Bristol, a five-star property which opened in 1925 in the heart of the art district. The 188-room hotel served as the home of the American Embassy during WWII and has welcomed the likes of Princess Grace of Monaco with a swimming pool offering a view of the Basilica of Sacre-Coeur.

Lovers of art may also enjoy the Le Meurice, the hotel in which the surrealist painter Salvador Dali spent a manic portion of his time each year. Le Meurice, in a dining room modeled after the Palace of Versailles, serves Michelin-starred meals in sight of the Louvre.