The Kansas City Chiefs won their way into the Super Bowl and earned a stay for their families and themselves at the JW Marriott Miami Turnberry Resort and Spa for the week of the big game. The NFL and the Super Bowl Committee carefully selected hotels for both the Super Bowl teams, and Turnberry, in Aventura on the north side of Miami Beach, was awarded status as the resort headquarters the AFC team. 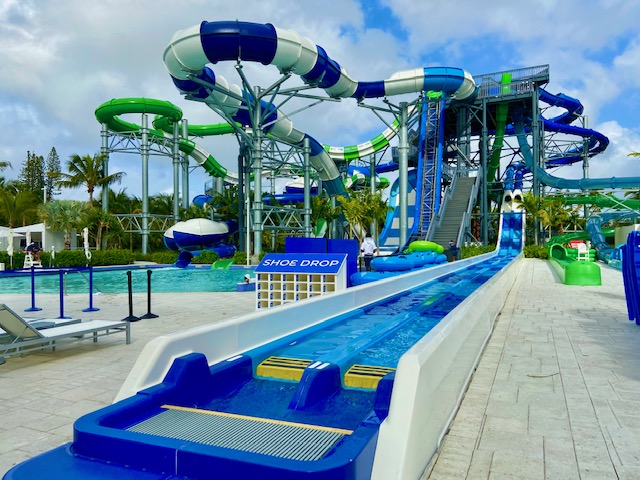 Super sliding and swimming at one of Miami’s Super Bowl Hotels. (Photo by Harrison Shiels)

“JW Marriott Turnberry is one of the most iconic hotels in the city. It’s been here more than 50 years and has just been re-imagined,” said Jeff Klein, the hotel’s vice-president and general manager. The resort built a new hotel tower, renovated its two Robert Trent Jones Sr. golf courses – which have been redesigned by Raymond Floyd – and built “Tidal Cove,” a state of the art, five-acre, luxury water park with cabanas and dining. Tidal Cove is a surprisingly elegant experience: exciting and enjoyable for children, teens and adults. Aventura Mall – one of the nation’s top shopping experiences – is just outside the JW’s entrance, and while famed Chef Michael Mina’s Bourbon Steak restaurant is on-property, it’s the only on-site celebrity presence you’ll hear Klein talk about. “We are very discreet about stars staying on our 300-acres here. We keep their profile confidential. Someone famous staying here is just another day at Turnberry.”

The Chiefs will be well-insulated at the resort. “There’s only one way in and one way out. We’re an oasis,” said Klein, explaining that once the players are driven in the gate and are dropped at the secluded ballroom entrance it’s up to them how much they would like to mingle with the other guests. “We’re able to keep the players safe and give them a luxury experience.”

But how does a resort go about feeding a team of massive professional football players for a week?

“When the players come in it’s like they’re eating at home: they get exactly what they need before the game. And their requested menus are very specific,” said Klein. “Their chef and dietitian typically work our chef for their needs which are very precise right down to the size of the broccoli florets and type of bread, peanut butter, almond butter and cashew butter. Some athletes eat chicken, some eat pork, and some are allowed to eat ice cream. There is no shortage of food being served in the ballrooms, privately, to these NFL teams that come in.”

The JW Marriott Miami Turnberry also hosts most of the visiting teams that travel to Miami to play the Dolphins during the NFL regular season. University of Michigan alum Stephen Ross owns the Dolphins and the stadium in which the Super Bowl will be played. Klein said Ross is a friend of the hotel and the snazzy craft cocktail bar “Soff’s” is named for Aventura’s founder Don Soffer, whose vintage black and white photos with the Pope, Sinatra and other luminaries adorn one wall.

Klein previously served in similar roles at some of South Florida’s other famous properties. “Miami is a great spot for the Super Bowl because Miami itself is a world stage for culture. From Art Basel to boat shows, we attract some of the most prestigious people in this city to our events.”

Will Klein be attending the Super Bowl?

“The tricky part about me going to the game is making sure I’m back before the team in time for the post-party. Hopefully it’s a victory party.”