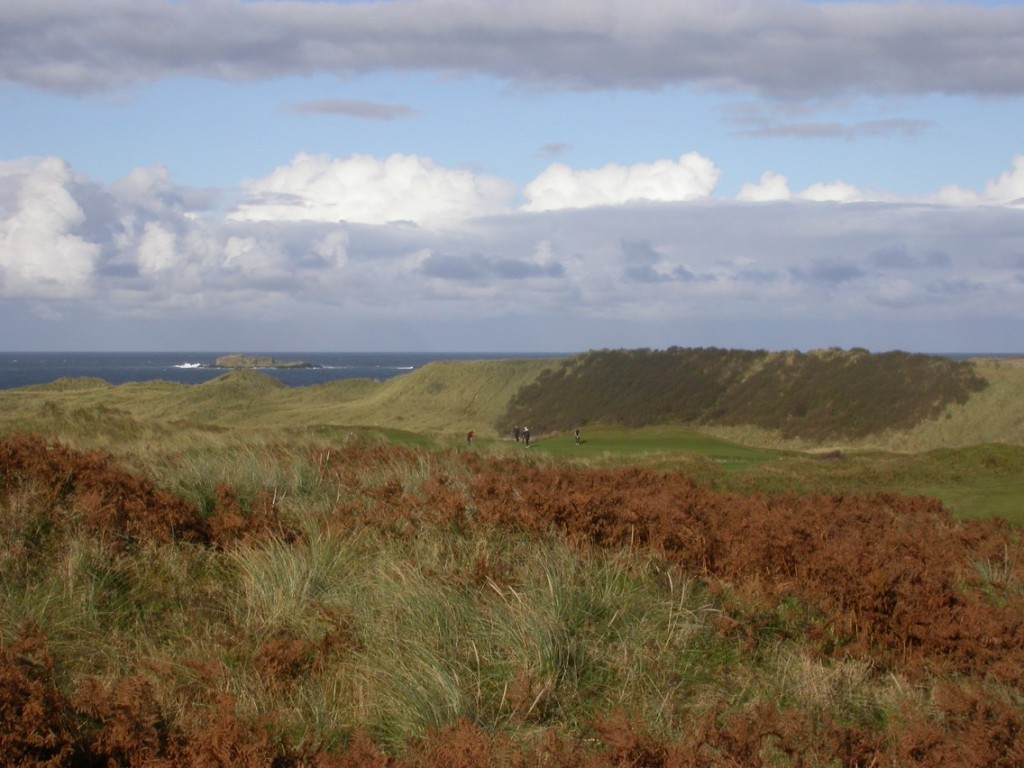 Recent triumphs have skyrocketed Northern Ireland to super-star status in the world of golf, aided in no small part by the trio of golf champions born and raised there. Rory McIlroy took the US Open in 2011, the PGA Championship in 2012 and briefly and held the title as the world’s number one golfer in 2013. Graeme McDowell won the US Open in 2010 and Darren Clarke walked off with the British Open trophy in 2011. These three chaps have become ambassadors, not only for the game but also for their homeland where golf reigns supreme.

This past fall, I headed over to the Emerald Isle to check out its fairways, from the “jewels in the crown,” Royal County Down and Royal Portrush, both regularly ranked in the world’s top 20, to some of the lesser-known tracts where Rory, Darren and Graeme honed their games.

The Dunluce Links Course at Royal Portrush, though generally considered easier than Royal County Down, is certainly no walk in the park. This is Darren Clarke’s home course. It’s also where Rory McIlroy shot a record-breaking 61 back in July 2005 during his amateur years. His scorecard is on display in the clubhouse. The course, re-designed in 1947 by H.S. Colt, was the first host to the Open Championship held in Ireland. You won’t likely forget the notorious par-three Calamity Corner, with its green perched precariously at the edge of a cliff and requiring a carry over an enormous ravine.

After the round, the inviting smoky smell of a peat fire lures visitors into the Bushmills Inn, a snug place to stay and explore the northern Causeway Coast that winds from Limavady to Ballycastle.  Just west of the Royal Portrush Golf Club, the Strand Course at Portstewart Golf Club is a classic links layout with most of the holes played atop high sand dunes above the Antrim Coast. The first hole with its elevated tee and dogleg to the green is considered the best opening fairway in Ireland.

Switch your spikes to walking boots, fortify yourself with a famous Ulster fry breakfast—eggs, potato farls, grilled Irish bacon, mushrooms, tomatoes and wheaten-bread toast, then head to The Giant’s Causeway, a World Heritage Site and geological marvel. You can hike among the 40,000 six-sided basalt columns formed by cooling lava about 60 million years ago. Legend has it that Irish giant Finn MacCool built the Causeway as stepping stones to his sweetheart on Hebrides Island in Scotland. Not for the faint of heart is the Carrick-a-Rede rope bridge swinging high above the sea out to a tiny salmon fishery.

After the trapeze act, you’ll be ready for a tour and some Irish elixir at Old Bushmills, the world’s oldest licensed distillery, where they’ve been producing the “water of life” since 1608.

Portrush and Portstewart are quintessential links courses and that’s what most North Americans want to play in Ireland. But sometimes even single handicappers need to give their egos a boost by hitting some parkland courses that feature conditions more similar to what we are used to playing, i.e. less gale force winds, no dunes or pesky gorse. 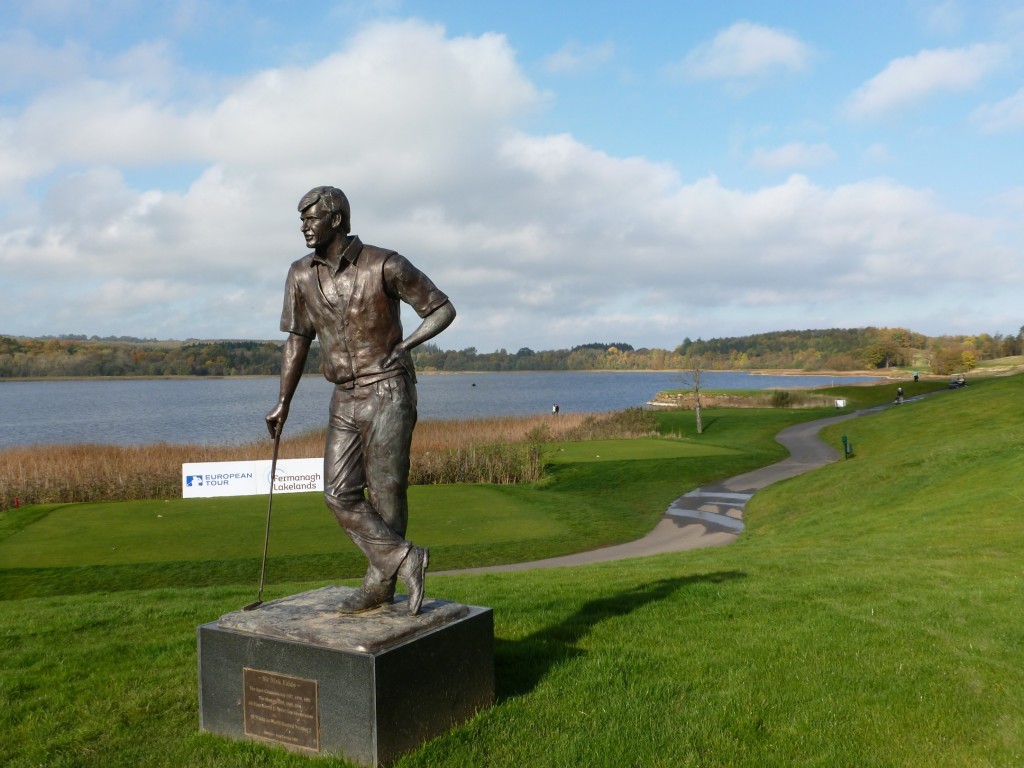 One of the best modern designs is Lough Erne Resort by Sir Nick Faldo, whose statue overlooks at the first fairway. Lough Erne was voted “Golf Resort of the Year” in 2010 and “Best Hotel” in 2011 by the Irish Golf Tour Operators Association. Located on a spectacular peninsula between two loughs (lakes to us) it’s no surprise that water comes into play on 11 holes. Rory McIlroy is Lough Erne’s Touring Professional and represents the Resort in worldwide tournaments. He set the course record here of 68.

Creature comforts at the hotel, the first five-star in Northern Ireland, include an authentic Thai spa, sumptuous rooms with huge claw-footed tubs and a terrific array of restaurants and bars. However, if you want to experience a one-of-a-kind pub in the woods, ask golf director, Lynn McCool, for directions to The Ceili House. A place like no other, it’s decorated from floor to rafter with bric-a-brac—from John Wayne in The Quiet Man posters to squeeze boxes to glowing pot stoves. As the Guinness slides down and the dance floor revs up, owner Tom McGowan might make an appearance dressed as a leprechaun and you might find yourself rocking and rolling wearing a fireman’s hat. You might find McCool herself strumming her bodhran drum. 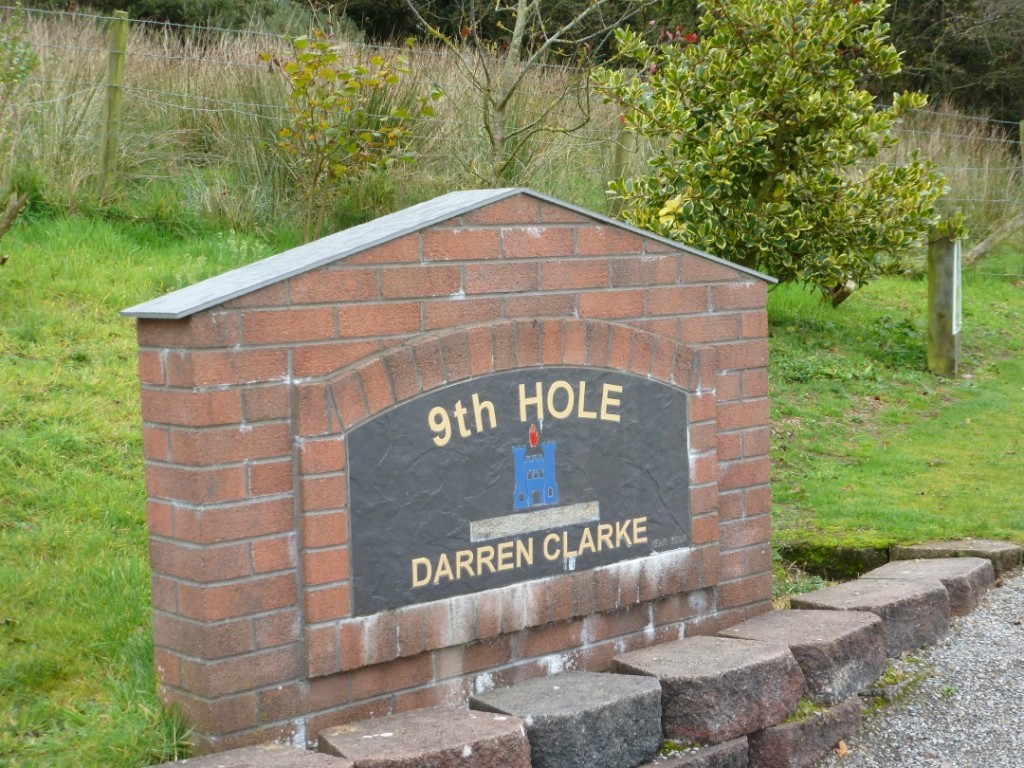 For a bargain round (£20) on a pleasant parkland course where Darren Clarke learned to play, head to the Dungannon Golf Club.  Founded in 1890, it’s one of the original founder clubs of the Golfing Union of Ireland. Clarke, now an Honorary Life Member, officially opened the new Clubhouse back in June 2000.  The new signature 9th hole, named the “Darren Clarke” features a fairly narrow, ribbon-like crescent shaped green, which is completely protected from the tee by a pond. After your round visit the Members Lounge that is festooned with Clarke memorabilia and photos.

If you’re keen to play where Rory learned to strike the ball, head to Holywood, just outside of Belfast with views of Belfast Lough and the famous yellow cranes, named Sampson and Goliath.

Neither Holywood nor Dungannon will knock your socks off but they will restore your confidence to tackle more great links tracts.

In the heart of a fishing village about 30 miles south of Belfast, the Ardglass Golf Club is an impressive sight. The fairways are impeccably maintained and the posh clubhouse was formerly a castle. On a clear day you can see the Isle of Man in the Irish Sea. Beware of hole number two: your tee shot must carry a cliff and a canyon and that’s the easy part!

Further south is the lively seaside resort of Newcastle, surrounded by the heather-clad Mountains of Mourne. By now you’ve had lots of practice and will be ready to take a swing at the famous Royal County Down Golf Club,

Ireland’s best course and one of the world’s top 100.

At Royal County Down prepare to meet the beauty and the beast.

“It’s one of those rare courses where you could feel a perfect handshake between the hand that created the land and the hand that shaped into a golf course,” wrote Tom Coyne, author of A Course Called Ireland. Narrow ribbons of fairways wind their way through daunting sand dunes surrounded by beautiful, yet penal gorse and heather.

Ironically, of Northern Ireland’s crown jewel was originally laid out in 1898 by the legendary Old Tom Morris from St. Andrews. The enthusiastic yet parsimonious Country Down Committee commissioned Old Tom to travel from Scotland “for a sum not to exceed £4” to advise on a second nine holes.” Today, the green fee is £180 and golfers need to book months in advance. Since this is a bucket list course for many, I suggest you shell out an additional £40 for a senior caddie. Most of them are entertaining characters who can help you navigate the slick greens, blind tee shots and idiosyncrasies that make Royal County Down both daunting and divine. For many, hole number nine is golf ecstasy requiring you to drive your ball over a high hill covered in gorse down to the fairway eighty yards below. Royal County Down can be exhilarating or excruciating, but you’ll never forget it.

Set on its own 600-acres peninsula, Lough Erne has 2 championship courses, The Faldo Course and Castle Hume. Rory McElroy deems it a great place to play and stay. 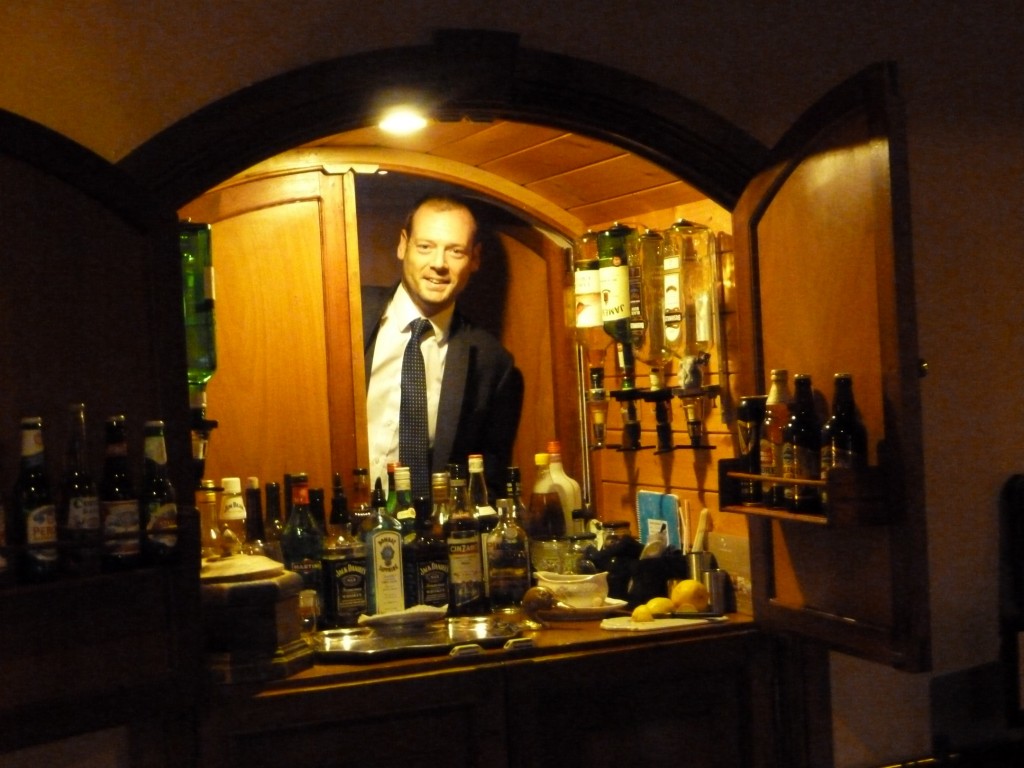 A Wee Dram at Glassdrumman Lodge

Nestled in the foothills of the Mourne Mountains, the 10-bedroom Glassdrumman Lodge, run by the Hall family will give you a very warm welcome. It’s minutes from Royal County Down and several other courses. Ben is your host, while his brother, Jonny, rustles up gourmet breakfasts and dinners in the kitchen. You must try their Irish wheaten bread.

Overlooking Belfast Lough this five-star property was originally built as a palace for the Bishops of Down. The hotel concierge can arrange for golf at several nearby courses, including Holywood and the Royal Belfast, the oldest club in Ireland, founded in 1881 and designed by Harry Colt. Don’t miss lunch or tea in the splendid Victorian clubhouse.