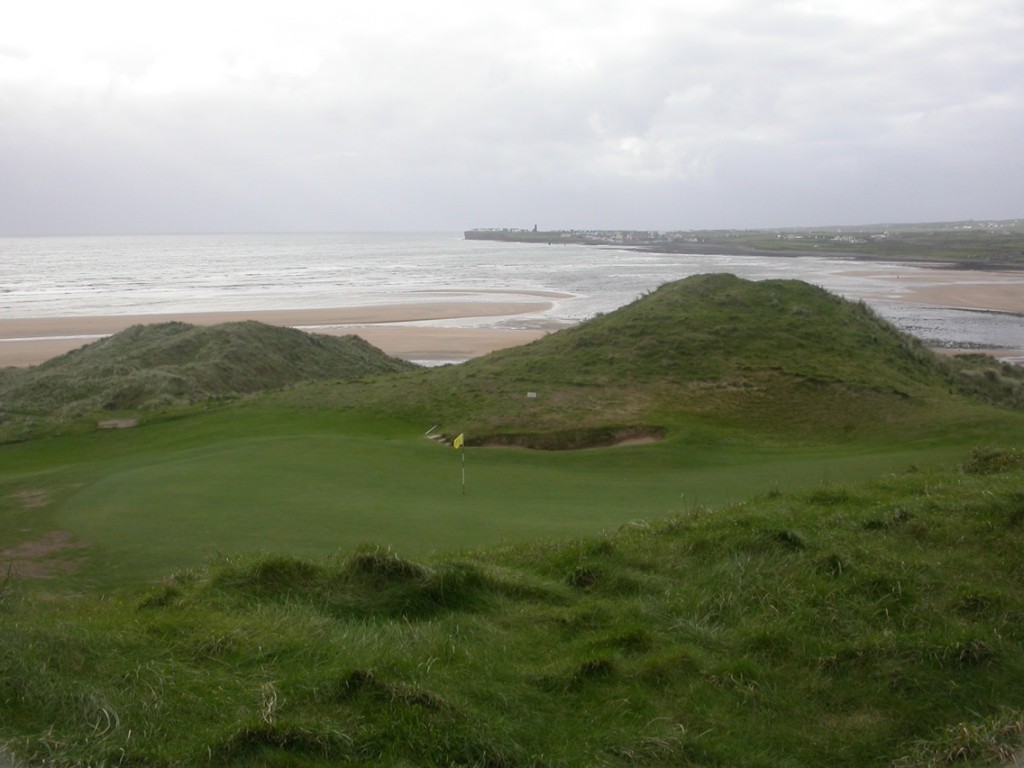 “That’s not a golf course, it’s a bloody battlefield,” remarked by husband Bill as we stepped up to the first tee on the Old Course at Lahinch.

Indeed, with pot bunkers the depth of graves, tall marram grass and fescue waiting to snag your Titleist and a savage wind, we were about to embark on a glorious battle against one of the finest links courses in Ireland.

For pampered North American golfers, the first encounter with a true links course may come as a bit of a shock. Forget about tree-lined wall-to-wall fairways, copious yardage markers, benches, ball cleaners, and cart girls. Buggies, as they’re called in Ireland are few and far between; links courses were meant to be walked. Count on quirky bounces. Expect to lose plenty of balls in the rough and taste the salt in the invigorating air. Links courses are created in the main by Mother Nature, carved through dunes linking land and sea. This is golf at its purest. Golf as it was meant to be played.

There are about 160 genuine links courses in the world and almost forty per cent of them are on the Emerald Isle. How’s that for the luck of the Irish?

Lahinch Golf Club, frequently referred to as the St. Andrews of Ireland, was founded in 1892. The original layout was the brainchild of Old Tom Morris, a four-time British Open champion. In 1927 Scottish golf architect, Dr. Alastair MacKenzie, who also lent his genius to Augusta and Pebble Beach, made some alterations. A purist, he shaped holes through the sand dunes and created greens with subtle contours and movement rolling with the natural lay of the land.

The First at Lahinch is an uphill battle against those very contours and a bracing wind from the Atlantic Ocean. The Irish would call it a soft breeze; we’d call it a gale.

Links lesson number one: hire a caddie. These fellows usually know every inch of the course and all of its eccentricities. I lucked into Michael Vaughan, a Lahinch club member and retired chef.

By the time we reached number four, the notorious Klondyke hole, Vaughan was not only sharing course strategy but becoming a coach as well. “Stay down on it and think positive,” he suggested as I endeavored to hit my tee shot onto what is said to be the narrowest fairway in Europe and follow that with a second shot over an intimidating monster dune to a “blind” green.

Next came the famous and unorthodox Dell, an entirely blind par three played over another high dune to a smallish green. A white stone on the hill marks the line of attack.

And so we soldiered on through gusts, gullies, bunkers and enormous dunes. On the Ninth, Vaughan pointed out the ruins of a 13th century castle and we encountered Lahinch’s resident goats grazing on the fairway. In the foyer of the clubhouse a sign pasted over a barometer hanging on the wall reads, “See goats.” The story goes that if the goats start heading toward the clubhouse, it’s a sign of bad weather. A long time ago the members agreed that the goats were far more reliable than the barometer. Being Irish goats, they seemed impervious to the gale force winds the day we played.

King and Queen of the Castle 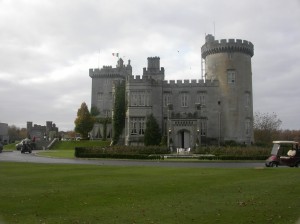 By the 18th hole we were ready to throw in the towel and concede to the legendary course. After a day of toughing it out on the links, the creature comforts of nearby Dromoland Castle beckoned. One of the grandest baronial castles in Ireland, Dromoland was the ancestral home of the O’Brien clan. Inside the gothic-styled grey stonewalls, protected by four massive towers, we drowned our scorecard sorrows with a couple of pints in the mahogany-paneled Library Bar. Maybe that advertising slogan, “Guinness is good for you” is true. We were feeling grand as we adjourned to the Earl of Thomond Dining Room. We dined on Galway Bay smoked salmon, beef fillet with a fondue of wild mushrooms and strawberry millefeuilles with champagne sorbet, all the time watched over by a portrait of “Red” Mary O’Brien whose three husbands all died mysteriously, leaving her with a fortune.

We felt like country squires. The fairytale castle looms over the specacular18th hole that borders Dromoland Lough. So impeccable are the greens and fairways, you’d swear leprechauns had trimmed them with manicure scissors.