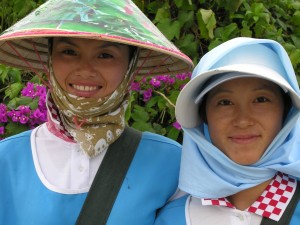 My view from the deluxe suite at the Yalong Bay Mangrove Tree Resort in Sanya on Hainan Island overlooks swaying palms and a turquoise South China Sea. Around the open-air lobby and infinity pool, amenities include a Balinese-style spa, cigar and wine lounge, pearl boutique and three gourmet restaurants. Pinch me. Am I really in a Communist country?

In his book Getting Rich First: Life in a Changing China, Shanghai-based journalist Duncan Hewitt states, “Chinese society has been dragged from Stalinism to the extreme fringes of capitalism in less than 20 years. To live in China in the early years of the 21st century is to be surrounded by change on a scale and at a pace arguably unprecedented in human history. The whole value system has been shaken, but people are expected to believe in communism.”

Indeed materialism, not Maoism, appears to be the favoured doctrine these days, especially here in Sanya, dubbed the Hawaii of China and boasting the country’s cleanest air.

The pace of development is mind-boggling. On the way from the modern airport where a Dolce & Gabbana fashion video is shown on high definition television,  Lydia, our guide, informs us that the government intends to build 50 golf courses in the next 20 years. I recall that during Chairman Mao’s regime, golf in the People’s Republic was banned as he deemed it decadent and elitist.

On Yalong Bay’s strip of beach I count about a dozen five-star hotels. The government has also signed a deal for a seven-star hotel with Sir Li Ka-shing, one of the world’s wealthiest men, who owns much of the real estate in Hong Kong. Signs inform me that the Four Seasons and Mandarin Oriental are coming.

The Russians are also coming—in hoards. So are the Koreans who enjoy the bargain golf, the well-heeled Chinese from Hong Kong as well as some of China’s designated Special Economic Zones, such as Shenzhen. One evening a white stretch-limousine picks us up and takes us to He Sheng Tang, a combination spa/hospital where VIPs such as the President of Kazakhstan spent a month. Treatments for fatty liver, gout and a myriad of ailments are available but I opt for a traditional body massage performed by a young girl with fingers of steel who probably weighs about 49 pounds. She contorts me into pretzel positions and walks down my spine. It is probably the best massage I’ve ever had for about $13.

The funny thing is that most Canadians haven’t heard of Sanya. And, until last winter, that included me—even after twenty-some years of globetrotting and travel writing. But a few of us were planning a golf trip to play Hong Kong’s Kau Sai Chau North and South courses and sample some of Mission Hills’ ten designer tracks in Shenzhen. With Sanya just one-hour away via Dragon Air we decided to include it in our Asian swing. 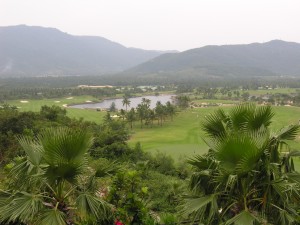 Not far from our hotel, we head out to the Sun Valley Golf Course, its grand clubhouse complete with an indoor waterfall, extensive wine cellar, sushi bar and spa. The meticulously manicured 18-hole course set in the lush Hongxia Valley with mountain and China Sea views winds up with a grand (and I do mean grand) finale—the 828-yard 18th, the only par-six in Asia.

We also play Yalong Bay Golf Club, the first in Sanya by the prestigious Robert Trent Jones Design firm. Along with 98 deadly bunkers, there are other hazards. My caddie informs me that a few months ago he discovered an 18-foot cobra coiled around the toilet in the halfway house. Yikes!

After our game we stop in for an organic tea tasting ceremony and then buy some baubles at the pearl emporium. Cocktails are at the Crowne Plaza hotel on our beach strip where contestants for the Miss World beauty pageant are strutting their stuff around the freeform pool.

Back at the Mangrove Tree a reflexology foot massage on the beach costs $12 for one hour. We opt for dinner in the resort’s Thai restaurant. Thanks to a tropical climate and the South China Sea teaming with fish, exotic fruits, veggies and fabulous seafood are part of the healthy cuisine here in ‘Red Hawaii.’

I must mention that there is another side of life here that’s far from posh.  In our travels around the island we pass dismal hovels, rickety rickshaws, mangy dogs and labourers toiling in rice paddies with water buffalos. While tourists are enjoying the good life, many of these poor locals will probably never own a television or have modern plumbing. 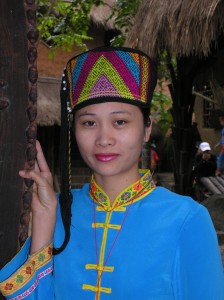 On our last day, Lydia takes us to the Li and Miao Cultural Villages where we get a glimpse of life before infinity pools and sushi bars. Thirty-seven different ethnic groups live on the island. The Han people are the most populous, followed by the Li, Miao and Hui minorities.  Drumming, dancing with bamboo poles, swallowing fire and walking on shards of glass are all part of the show, as are intricate weaving displays and a chance to participate in some local traditions. The Li marriage ceremony, for example, requires potential grooms to wear silly hats, sing and make fools of themselves—but all in good fun. It’s a reminder of the dramatic changes that have transpired in this part of the world. And that begs the question, what’s next?