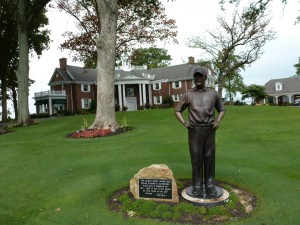 “The ardent golfer would play Mount Everest if somebody would put a flagstick on top…golf is not a fair game so why build a fair golf course.”

At the entrance to the Pete Dye Course at French Lick Resort, a plaque bearing these words sits beside a life-size statue of the feisty architect. I have’t even made it to the first fairway and already Pete is playing head games with me.

Dye, renowned for his challenging courses is being totally upfront about his 8,102 (from the tips) serpentine tract carved out of the Hoosier National Forest in southern Indiana. Located on top of a precipice 1,000 feet above sea level, the second highest elevation in the state, on a clear day you can see 30 miles in every direction.

Dye, who was hired to design the course back in 2006, had some history in this little-known neck of the Indiana woods. In 1957, he won the Midwest Amateur Championship on the resort’s Donald Ross Course and he admits to partying at the French Lick hotel.

I’ll tell you more about French Lick, how it got its name and its fascinating history in another GRW blog, but let’s get back to the Dye challenge. The course achieved the rare double honor of being selected as America’s best new course in the January 2010 issues of two of the leading golf publications in the country—Golf Digest and GOLF Magazine. 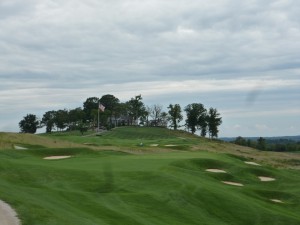 Imagine an impeccably manicured anorexic green snake of a fairway that slithers along a roller coaster terrain atop a ridge.

The object is to “keep in on the fairway,” advised my forecaddie, Josh England. Because if you don’t you’ll be down in a gully with nary a flat lie. Another goal is to keep your Titleist out of a series of volcano bunkers sprinkled over the fairways.

When  Dye’s course  at French Lick opened in 2009  it was the first time in his career that Dye extended the length beyond 8,000 yards for the pros. The grand finale from those pros’ tees includes the 301-yard par-three 16th, a 518-yard par-four 17th and the mammoth 657-yard par-five (looked like a par-seven to me) 18th.

Dye acknowledges that these yardages are “fantasyland for 99 percent of golfers.” That’s why he has given us five sets of tees with the forward ones measuring a mere 5,151 yards.

Dye’s masterpiece is almost tree-free thus allowing unrestricted views of the surrounding forest. Water hardly comes into play and there are no houses, except for the Taggert mansion perched at the very top of the hill.

Thomas Taggert, a charismatic Irishman, owned what was called the French Lick Springs Hotel and built his home here in 1928. Today, the Georgian-style red brick mansion’s main floor serves as the clubhouse restaurant. While she was making my fantastic chicken salad sandwich, my effervescent server, Heather Harrison, invited me to climb up the double spiral staircase to visit the four elegant suites. Those with deep pockets can rent the entire mansion for $10,000 for 24 hours. It sleeps eight and has panoramic views from every window and balcony. With the package comes a private chef and unlimited golf. And perhaps a nocturnal sighting of the ghost of Mr. Taggert riding his favourite horse, Peter the Great, through the halls. 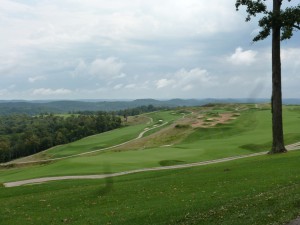 If all that seem a bit rich for your pocketbook, order a drink from the rose-lined patio and admire yet another Dye triumph that he describes as “a resort course with multiple tees so the best and worst golfers on the planet could have the time of their life…”

Thanks Pete. Who needs Mount Everest?