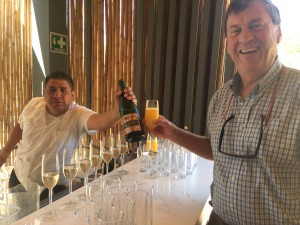 Unlimited Mimosas at the Polo Brunch

Quite apart from being a lovely laid-back beach town, San Francisco, dubbed San Pancho by locals, is full of sporting surprises, namely polo and golf. Some describe polo as hockey on horseback. However, Ignacio Figueras (known as Nacho), who is the most famous professional polo player today, describes the game as “more like playing golf in an earthquake.” 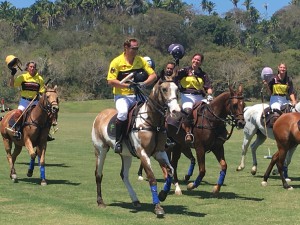 If you’re keen on watching some earth-pounding chukkas, head to La Patrona Equestrian Center & Polo Club, the only one in the state of Nayarit, founded in 2,000.

Polo originated in Persia around the 6th century and has been called the “sport of kings” because it actually counts princes and kings among its participants.

Indeed, if you go for the Sunday Polo Brunch at La Patrona, you will be treated like royalty. Our waiter, Thomas, brought us unlimited Mimosas as we enjoyed the bountiful brunch consisting of empanadas, ceviche and guacamole followed by heaping platters of barbequed meats and grilled veggies in the handsome second-level lounge of the La Patrona Club.

Around noon and before we got too tipsy from all the bubbles, the announcer summoned the players to ride out onto the field and be introduced. The Sunday we attended there was an exhibition match with players, both male and female, from Mexico, Europe, the U.S. and even a rider from Windsor, England.

Polo, I learned, is the only contact sport in which both sexes compete together. A game consists of four to eight seven-minute chukkas (periods) with four players on each team. For those of us who know next to nothing about the game, the announcer brought each exciting pass, strike and goal to life as the players and their mounts galloped fast and furiously up and down the field. After the last chukka, the crowd applauded, the players and their steeds took their “bows.”

Aside from polo, La Patrona Equestrian Center offers facilities and lessons for riding, jumping and dressage. You may also arrange to go horseback riding along the beach or through the jungles of San Pancho. La Patrona also organizes gastronomic and cultural events.

Sunday Polo Brunches at La Patrona Equestrian Center & Polo Club take places from November until April. The cost is $35 U.S. and includes Mimosas, brunch and the match. From April 9 to 15 this year, consider attending the Jaguar Cup. There will be polo matches on April 11, 12 and 14 from 3 to 5 p.m. Saturday, April 15 will be the final with brunch starting at noon. 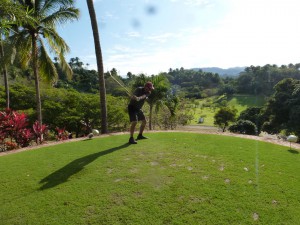 Las Huertas Golf & Beach Club is my newest golf discovery in Riviera Nayarit. I was told that the owner is an avid golfer who used to play frequently at Punta Mita until it was decided that the two courses would be available only to resort guests and owners. So Senior Hardesty built his own swinging playground in San Pancho, where he lives. He called it Las Huertas (means the orchards) as the fruity fairways incorporate mangos, grapefruits, cashew nut, cinnamon, tamarindo, black pepper and guanabana trees.

There is never a dull moment starting from the elevated first tee where you must propel your Titleist over treetops while avoiding the pond on the right. Number seven requires that you thread the needle through a narrow jungle opening. From the green on number nine you’ll have a lovely view of the Pacific. 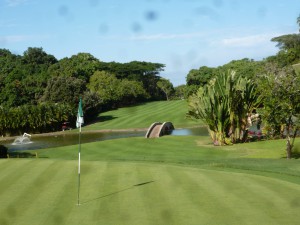 Las Huertas is par-32 track measuring 1,953 yards from the tips. There are only nine holes (one par-five, two par-fours and the rest are devious par-threes) but sometimes that’s all you want, or, you may play the course twice. This is no “cow pasture.” Fairways are well maintained, the greens are impeccable, golf carts are state-of-the-art (but you can also walk). At Clara’s Pub you’ll have a grand view of the Pacific while you sip your cerveza, enjoy typical Mexican dishes such as quesadillas, fajitas and nachos and brag about your birdies.

Nine holes cost 420 pesos; 18 holes cost 760. Carts and clubs are available for rent in case you decide on a spur-of-the-moment round.

When you visit San Pancho, consider a night and/or a bite at Cielo Rojo, a charming nine-room hotel and Bistro Organico located a couple of blocks from the beach (Calle Asia #6). It’s a member of the Mexico Boutique Hotels collection, so you are assured of not only high standards, but also a unique experience.

The motto here is: Food is fuel, food is medicine, food is love. Hotel Cielo Rojo also sells artisanal tequila and olive oil. There are complimentary tequila tastings every Friday from 6 to 8 p.m. The restaurant is open for breakfast and lunch every day except Monday; dinner is served Friday, Saturday and Sunday evenings.