Cheese, Chocolate and all the Jazz 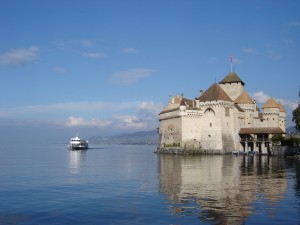 Biting into a Toblerone chocolate pyramid, the last of my stash from a recent trip to Switzerland, brings back sweet memories of Montreux and the Swiss Riviera.

We can thank the Swiss for many good things including sublime milk chocolate, fabulous cheese (hence the national dish, fondue) and the world’s best pocketknives. You’ll dine well all over this country of 26 cantons and four official languages (French, German, Italian and Romansh but the gastronomic Mecca is the Montreux Riviera nestled between the balmy north shore of Lake Geneva (or Lac Léman as the Swiss call it) and the frosted Swiss Alps.

Along with the ancient sun-drenched Lavaux vineyards, home to the Chasselas white grape and named a UNESCO heritage site in 2007, the region boasts more than 100 restaurants that have been awarded Michelin stars and/or Gault Millau toques. This Vaud Canton alone is studded with 17 Michelin stars!

I began my epicurean romp by taking a short, relaxing cruise on one of the lake’s vintage steamers from Montreux to neighbouring Vevey. There I meandered along the lakeside promenade, past a statue of one of the town’s most famous residents, Charlie Chaplin, and literally followed the fork to the Alimentarium, the world’s one-and-only food museum, operated by Nestlé, the world’s largest food company whose headquarters are also in Vevey. The gigantic eight-metre fork, created by Swiss artists Jean-Pierre Zaugg and Georges Favre juts out of the lake like a playful beacon while swans glide around its prongs. 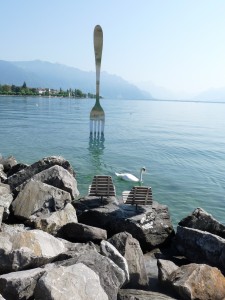 The famous fork sculpture at Vevey

A vegetable garden at the entrance to the Alimentarium provides ingredients for the kitchen inside where chefs offer daily cooking demonstrations for adults and kids. Various hands-on displays throughout the museum provide a fascinating insight into the world of food— from the origins of pizza to a look at how the Swiss diet has changed (for the worse) over the last 100 years to the ongoing battle against counterfeit Nestlé brands such as fake Nescafé instant coffee and baby formula.

Just around the corner chef Denis Martin’s molecular cuisine has earned him two Michelin stars. His 26-course “Evolution” menu is meant to be an unforgettable gastronomic splurge. From his laboratory-like kitchen you might be intrigued by a sardine sorbet or a chocolate balloon. His “Rien” course, served halfway through the dégustation, is actually nothing on a plate but served with great gusto by the waiters. At 350 Euros per person, Martin’s molecular adventure is best recommended for intrepid “foodies” with deep pockets and a sense of humour. 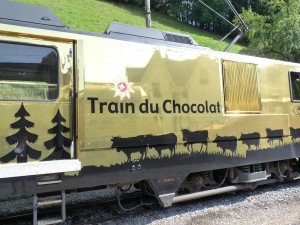 For those with more modest tastes and budgets, a day aboard the Chocolate Train is worth its weight in calories. The posh Pullman coach, refurbished with vintage brass hardware, pulls out of the Montreux station and winds its way along the shores of Lake Geneva, past the steeply terraced Lavaux vineyards to Gruyère station while passengers enjoy hot chocolate, coffee and croissants. 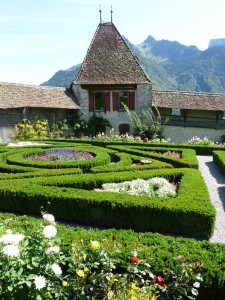 At the Maison du Gruyère we took a self-guided audio tour with Cherry the cow as our commentator. We learned that Cherry and her bovine buddies spend their summers high in the mountain pastures grazing on wild herbs, flowers, fresh grass and perhaps some vanilla orchids for dessert. This diet produces a complex cheese in which scientists have detected up to 75 flavours. After touring the cheese-making facility guests take a five-minute bus ride to medieval Gruyère, a tiny postcard-perfect hamlet dominated by a fairytale castle. The cobblestone village is choc-a-bloc with restaurants serving traditional fondue, raclette, quiche and double cream with berries for dessert. This is not a day to fret about your cholesterol count.

Back on the train, our next stop was the Maison Cailler in Broc where Nestlé offers tours of its chocolate factory and plenty of free samples. Here I learned that the Swiss did not discover or invent chocolate. Spanish conquistador Hernan Cortez brought the first cocoa to Spain in 1528. Eventually it became fashionable in Italy and France but it was often bitter and grainy. It was Daniel Peter who in the 1800s in Vevey was the first to refine the cocoa mixture with milk. Soon other Swiss chocolate aficionados, such as Philippe Suchard, Rodolphe Lindt, Henri Nestlé and Jean Tobler (Toblerone is probably the most famous Swiss triangular treat) further perfected the milk chocolate process. 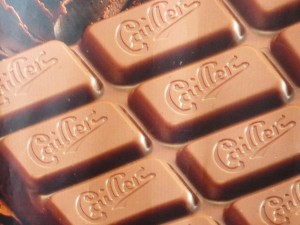 It’s no coincidence that the blossoming of the Swiss chocolate industry coincided with the great age of Swiss tourism between the 1890s and 1920, the era of the Grand Tour when wealthy Brits and Europeans holidayed in such hotspots as Montreux, enjoyed chocolate and spread the word. The entrepreneurial Rodolphe Lindt focused his attention on Swiss finishing schools where young ladies from all over the world came to learn manners and social graces, not to mention a proclivity for Lindt’s velvety chocolate fondant.

You can continue the chocolate theme with a decadent Choco Fango spa treatment at Fairmont’s Le Montreux Palace. Built in 1906, this jewel of Belle Époque architecture becomes party central for Montreux’s famous Jazz Festival held the first two weeks of July and celebrating its 44th year in 2010. A Montreux resident tells me that the hotel’s Harry’s New York Bar hops all night long during the festival which attracts more than 230,000 visitors and entertainers such as B.B. King, Miles Davis, Eric Clapton and Quincy Jones. Apparently the musicians love the vibe in Montreux because the fans and locals don’t engage in pop-idol swarming or panty tossing.

Mind you, if the locals seem “cool” with their famous visitors it’s because they’ve been welcoming them for centuries. Back in 1816 when Lord Byron penned his poem, The Prisoner of Chillon, about a convict chained in the castle’s dungeon, he put Montreux and Switzerland’s most photographed lakeside Chillon Castle on the tourist map.

Along with Charlie Chaplin and cool jazz cats, several other writers and entertainers have found inspiration on these peaceful shores including Lolita author Vladimir Nabokov and composer Richard Wagner. Perhaps the essence of the Swiss Riviera is best captured by French author Jean-Jacques Rousseau in his book, Julie, or the New Heloise, in which he wrote, “I find the countryside more cheerful, the greenery more fresh and lively, the air more pure, the sky more serene; the birdsong seems more tender and ecstatic; the babbling water inspires a more amorous languor, the vine blossoms in the distance give off sweeter perfumes; a secret charm beautifies every object or bewitches my senses.”

Even Canada’s Shania Twain owns a chateau in Vevay. Perhaps you should heed the advice from her best-selling album, Come on Over and let Montreux work its charms. Swiss efficiency with French flair in a Mediterranean setting is a seductive combination.

The 4-star Swiss Majestic Hotel is conveniently located directly across from the train station. Ask for a room with a balcony overlooking the lake.

Dubbed “the pearl of the Riviera,” Fairmont Le Montreux Palace has hosted everyone from Sophia Loren to Michael Jackson and is the place to hang out during the Jazz Festival.

A Swiss Travel Pass from Rail Europe buys you unlimited travel on trains, trams, boats and buses, plus entry to more than 400 museums and discounts on the Chocolate Train.