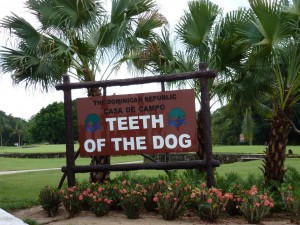 In the last few decades the Caribbean has evolved from a non-existent or no-frills golf destination to a hot spot worthy of your hit list. Gone are the days when tropical island golf was an afterthought; nowadays big-name designer courses with zillion-dollar budgets are sprouting up throughout the Caribbean. But it was Pete Dye’s first ever island creation, Teeth of the Dog at the Casa de Campo resort in the Dominican Republic, that set the standard by which others are judged. 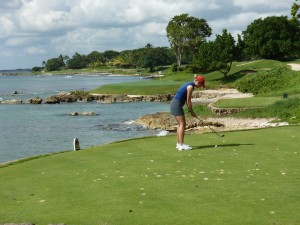 Teeth of the Dog opened in 1971 and still reigns supreme not only as the  “top Dog” in the Caribbean but also 47th worldwide, according to the 2011 Golf Magazine rankings. Woody Allen, Bill Clinton and Sting have been known to take a swing here. Today we Golf Road Warriors tried to tame the beautiful beast.  Dye, who transformed a jagged coral reef into a masterpiece, is quick to point out that while he created eleven holes, “the Man upstairs created seven.” Those heavenly seven border so close to the sea that you almost get your feet wet while teeing off. The inland holes meander through stands of palms, bitter orange, almond and teak trees.

Casa de Campo evolved due to the vast resources of the Gulf and Western Company whose sugar mill in the sleepy town on Romano was  once the largest producer of raw sugar in the world. “Sugar Daddy” Alvaro Carta, a Cuban exile in charge of the operation, wanted to invest some of the company’s profits back into his adapted Dominican Republic by creating a tourist resort with golf as its cornerstone. The land selected was too dry to grow sugarcane and too sparsely vegetated for grazing cattle. He hired Pete Dye, in hindsight, a stroke of brilliance.

Back in 70s the area around Casa de Campo was undeveloped and golf was in its pioneer stage. Pete Dye and his Dominican crew of 300 built the Teeth of the Dog course entirely by hand using primitive sugar cane tools and plenty of elbow grease to carve the tract out of rugged coral rock. While pick axing their way through the unforgiving terrain the Spanish-speaking workers started to refer to the parcel of land as dientes del perro meaning “Teeth of the Dog.” Pete Dye liked the name and it stuck. Coincidentally, the jagged seaside holes also resemble the open jaw of a giant canine. 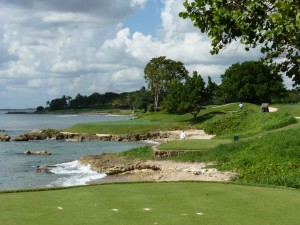 The scenery on Teeth of the Dog could bankrupt your vocabulary

Dye’s dogged (pardon the pun) determination was to put the Dominican Republic on the map as a premiere golf destination. Mission accomplished! Even though Dye has received numerous kudos for his courses throughout the world, Gilles Gagnon, the Quebec-born director of golf at Casa de Campo and longtime friend of Mr. Dye and Alice, his partner in life and design, confirms that Teeth is still Dye’s “baby.” Over the years, Dye returns to fine-tune his masterpiece, including a recent renovation that added about 500 yards to extend the Teeth’s bite to 7,471  yards from the tips.

Teeth features generous fairways and swaying greens that mimic the pitch and roll of the nearby sea. Numbers six and sixteen are officially named the signature holes but there are plenty more contenders.

The sixth is a long par-four right-to-left hole that usually involves some wind assistance, especially on the second shot. The temptation is to use the coral retaining wall, over the forward tees, as your target line, but it’s a huge carry—a neat piece of Dye deception. A line over the bunker to the right of the wall is better option, plus the slope of the fairway will kick the ball left.

The final Oceanside par-three 16th is probably the most penal. It generally plays into the wind and is relatively long. The trees around the green also cause swirl gusts, making club selection even more difficult.

I would argue that the oceanside number five, the shortest par-three on the course, rivals the seventh at Pebble Beach for sheer beauty and drama. Your tee shot must carry the water all the way to the green, which is surrounded by a small strip of sand and rocks to keep the waves at bay.

Bring your camera. And if you don’t like your score, blame it on the scenery.