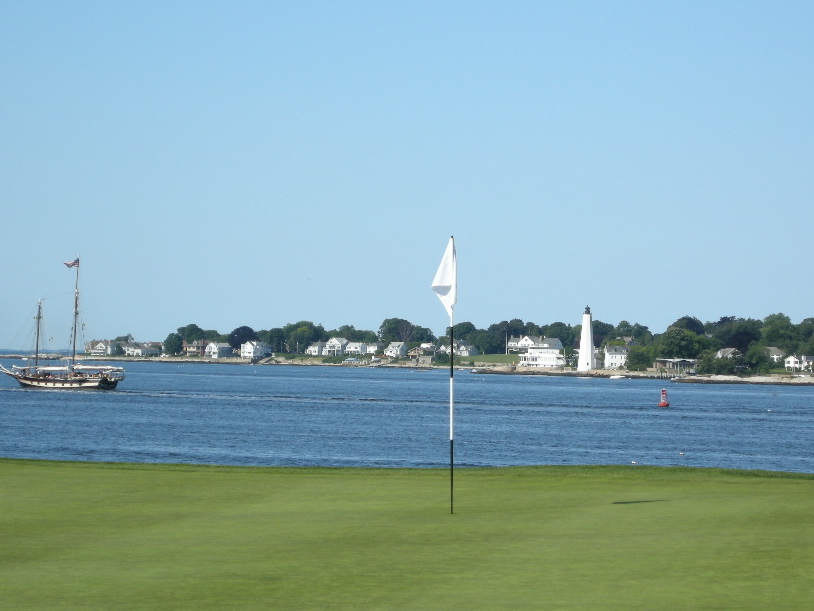 The perception of what a municipal golf course is can be so pervasive that munis which deserve accolades and should be sought out by golfers looking for an affordable, interesting, and pleasurable experience are often bypassed and disregarded.

In this ongoing series I’ll be chronicling some of the best municipal golf courses I’ve encountered.

In the 1990s a major golf magazine proclaimed Richter Park Golf Course in Danbury, Conn. one of the best municipal layouts in the country. With the pronouncement, suddenly this relatively unknown course was bestowed golf royalty. In reality, the selection was a joke. Richter Park wasn’t the best muni in Connecticut, never mind the country. 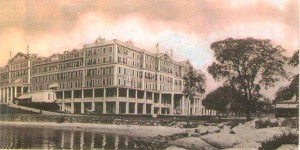 Had the selection committee journeyed down Interstate-95 to Groton, Conn., they would have found situated close to where the Thames River meets Long Island Sound, Shennecossett Golf Course, a 1919 Donald Ross gem. The course, which existed before the Ross design, was originally part of The Griswold, a grand hotel located across the Thames in New London. The hotel no longer exists.

At the time, Groton and New London were summer resorts for the wealthy. For that reason man of the top golfers in the country traversed the Shennecossett layout when the hotel was in its heyday.

For a time,  Max Marston, the 1923 U.S. Amateur Champion,  played his summer golf at Shennecossett. Glenna Collett and then Glenna Collett Vare, one of if not the greatest American female amateur golfer ever, won the Shennecossett Invitational more than once. The 1923 tilt  featured, according to the Hartford Courant, “Four of the Nations Most Brilliant Women Golfers.”  Collett, the reigning U.S. Women’s Amateur Champion, downed Edith Cummings, “the Fairway Flapper,” in the finals. Audrey Faust and Anita Lihme were defeated in the semis. Cummings would unseat Collett as amateur champion later in the year.

Groton purchased the golf course in 1969.

Shennecossett (peak rate of $49) has undergone significant modifications since the Ross layout opened but it still retains the majority of the holes he designed and, as a result, the flavor. The four new holes added by architect Mark Mungeam in 1997 were required when the town agreed to trade land with the Pfizer Corporation so the company could build a parking lot. Lost were holes five, six and part of seven. The wonderful green complex of the original 7th survives. 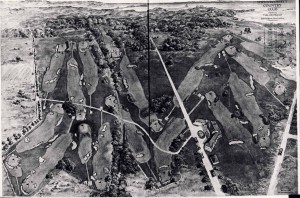 In exchange, Pfizer gave Groton a parcel of land close to the Thames where holes 15-17, designed by Mungeam, are located.

Other alterations were necessitated by the rerouting including the abandoning of one of the most uncomfortable Ross par-3s, I’ve ever played, the original 11th, a sharply uphill hole of 120 yards to a green so severely tilted back to front that even with green speeds hovering around seven feet on the Stimpmeter it was all but impossible to hold a chip from behind the putting surface. Mungeam adeptly used the tee of the 11th, eliminating the green and combining the hole with the original par-4 12th,  to create a testing par-5, now the eighth hole. He also added the par-3 ninth to replace the 11th.

With the original routing, golfers did not return to the clubhouse until they played the 13th hole. Now, the 10th tee is very near the first tee.

Mungeam’s work is solid. The 16th (pictured at the top) is one of the most scenic holes in Connecticut. The green almost appears to hover over the Thames. It is the Ross holes, however, that are the stars.

Adding to the enjoyment is the work superintendent Eric Morrison has done in his tenure, returning the conditions at “Shenny,” as the locals call it, back to firm. Morrison added drainage, cut back on the frequency of irrigation, removed trees, which has all lead to the improved health of the turf from tee to green. He no longer frequently mows out-of-play areas, allowing grasses and other flora to grow up which lends a seaside feel to the round. 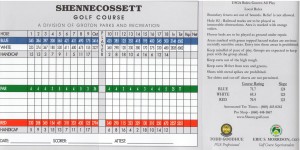 Even with those supposed transgressions, the talent of Ross as an intricate and creative designer is immediately apparent on what is considered one of if not his only links-style works. 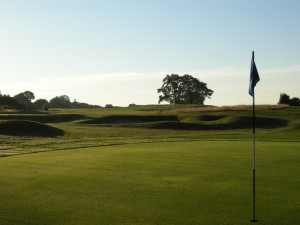 The third green with the fourth green in the background. (Photo Eric Morrison)

I love the par-4 third hole. The green tilts from front right to back left and a tee shot that flirts with the dangers of fairway bunkering on the right sets up the preferred angle for the approach. To the right of the putting surface, but set back some 20 yards, is a bunker that appears at first glance to be out of place. On further assessment, though, the sand hazard is in the perfect location to guard against the player who approaches the green from well right of the intended line. Those who think they can outsmart Ross by putting their drive into the fourth hole thereby avoiding trouble off the tee soon find it is nearly impossible to have the next shot clear the dastardly bunker and still hold the green.

The fourth hole is a memorable Ross par-3. Playing 208 yards from the back as it did since the day it opened, the green is perched atop a natural knob some 20 feet above the tee, creating a Volcano Hole. Even with today’s club and golf ball technology, hitting and holding the green, which appears to be the size of a postcard, is a daunting task on calm days and nearly impossible in the ubiquitous wind. Then, as today, shots that miss the green right, long or left can tumble 20 yards or more down the slopes. Bogies of the double and triple variety are not uncommon. In the two dozen or so rounds I’ve played there over the last 15 years, I’ve never seen a birdie at the fourth.

Like any good golf courses, Shennecossett reveals itself the more you play it. It takes more than one round to realize greens welcome approaches from specific sides while repelling shots that come from the worst angles. Putting surfaces might appear benign at first, but while not undulating, they have plenty of movement.

The green of 13th is one of my favorites. On the front right there is a subtle rise that can stop a rolling approach from reaching the intended goal. The back third is a shelf, perhaps a eight inches higher than the rest of the green, with the right side tilted to run golf balls into the rough. The left middle portion of the putting surface falls away enough so that misplayed shots are directed into a bunker.

After the three new Mungeam holes, the day ends with the par-5 18th. Ross designed it as a par-4 that played to what is now a practice green and that originally created a dangerous situation with its close proximity to the clubhouse and first tee. Mungeam expertly extended the hole to a par-5 and built a green that keeps those golfers waiting to tee off on no. 1 out of harm’s way and those playing the hole interested until the ball finds the bottom of the cup.

What Ross produced, above all else at Shennecossett, and to which the Mungeam holes fit, is a golf course that is fun to play, not because the strategy is apparent with “everything in front of you” but in all respects because it is the opposite of that, the opposite of the two mundane Rees Jones layouts at Lake of Isles (peak rate $199), part of the Foxwoods Resort just down I-95, the same road that takes you to Shennecossett. It is a golf course that rewards the player who possesses the greatest variety of shots and who approaches each swing with a sense of awareness and creativity. As with any layout that borders ocean waters, the circumstances can transform quickly and dramatically providing Shennecossett with ever-changing conditions and golfers with ever-changing challenges and boundless enjoyment.