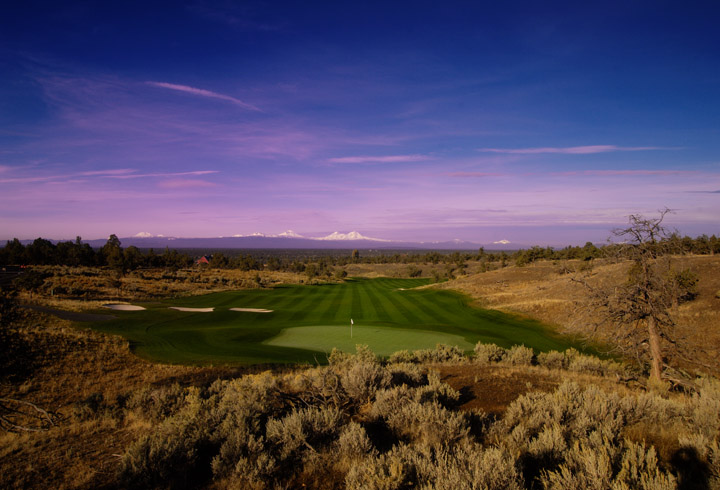 Brasada Ranch, that is.  And perhaps nowhere is the tranquility more pervasive on the property than on the Peter Jacobsen/Jim Hardy designed Brasada Canyons golf course.  Located just to the east of Bend, The Canyons Course meanders through high desert canyons offering spectacular panoramas, as well as an extremely playable layout for golfers of all levels.  The “you can hear a pin drop” stillness is only interrupted on occasion by the voices of fellow players enjoying the experience.  In this case, by my Golf Road Warriors playing partners in crime, Jeff Wallach, Tom Bedell and David J. Whyte.

The morning we teed it the wind was down and the sun was beginning to warm the cool-ish mountain air of the previous eve.  Glorious day for golf.  The black tees measure 6,600 yards, and at over 3,000 feet of altitude with super-generous fairways, it’s an acceptable distance for mid-handicappers, and challenging enough for a scratch player like myself.  When I played the Oregon Open here in 2009, the field played the “Jacobsen” (back) tees for the most part and the wind blew heartily in the afternoons.  Different deal…Much of the difficulty at Brasada Canyons lies in the large, discretely sloped greens.  The surfaces themselves are pure for rolling one’s rock; challenging to read in spots, with certain zones better off avoided altogether. 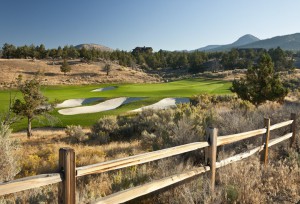 Some food for thought (and by the way, the dining experience at Brasada is a delectable undertaking) on improving lag putting:

– Read the putt from halfway between the ball and the hole.  Imperative to effective long putting is proper distance and speed – short putting is more about direction – so take a look at your longish offerings from the side to better discern the “uphill/downhill” aspect.  It’s crucial to know this before hitting the putt, and not best viewed from behind the ball or hole.

– Trust your eyes.  In a nutshell, the human mind/body system works like this: the eyes (and other such sense receptors) send messages to the brain, then the brain tells the muscles (the body) what to do.  Make sure your eyes are staying active at all times, moving between ball, hole and all the terrain in between.  Avoid getting stuck staring at the ball, or ‘thinking about’ how big of a stroke to make.  When we toss a ball at a target – what do we look at and do?  We look at that target and trust our system to execute the movement accurately and efficiently.  Putting, that act of rolling a ball with a relatively flat stick from point A to point B, is much the same.  So, you may ask – should one look at the target/hole whilst putting?  Many good putters do.

Elevation changes need to be taken into consideration at The Canyons as well.  My playing partners got a kick of me hacking it around out of the pines and sage (‘shrubbery,’ dare I say) after I air-mailed the par-3 17th.  A slight miscalculation of just how downhill this 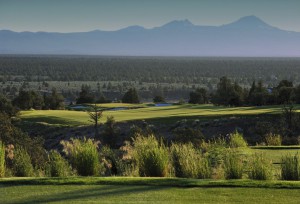 hole plays, a temporary neglect of the non sea-level elevation element, add a whisper of wind at my back – and I was backhanding my way out from underneath the jagged underbrush that surrounds the back of the green.  Felt like Robin Williams with a tire iron… A chip, putt and some juniper berries in my hair a few moments later, and I’d escaped with a bogey 4.  That’ll be in my memory bank next time I play the hole, which, along with the rest of the Brasada Canyons layout, I sincerely hope will be in the not-too-distant future.