The 2011 Masters will mark Carl Jackson’s 50th anniversary of caddying at golf’s most grandiose event and venue.  He started looping at Augusta National in 1958, and in 1961 at the ripe old age of 14, worked his first Masters.  Jackson has caddied for Ben Crenshaw since 1976, including victories in 1984 and 1995.  I was fortunate enough to spend a few minutes chatting with Carl last week, now the head caddy master at The Alotian Club outside of Little Rock, AK, about his experiences over the years.  Some of Carl’s thoughts and insight from that conversation, in his words: 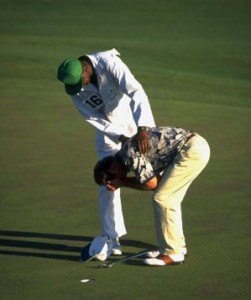 Jackson is now passionately involved with the Carl’s Kids Foundation (http://carlskids.org/), a program providing young people an opportunity to develop life-enhancement through golf.