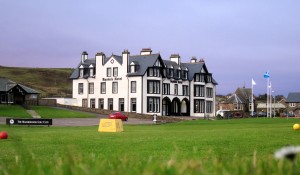 The Ugadale Hotel at Machrihanish Dunes

The word “Ugadale” in ancient Gaelic means: Place Where Overprivileged Writers Come to be Treated Like Lairds of the Land.”  No, it doesn’t.  I actually don’t know what it means — nor does anyone else here.  But I will tell you — the Ugadale Hotel at The Village at Machrihanish Dunes would more than live up to that credo if the word did mean that.

For years, golfers have made the trek to Machrihanish to play the famous Machrihanish Golf Club course, designed by Old Tom Morris in 1879.  But when it came to accommodations, the options offered locally weren’t on par with the quality of the golf.  All that changed in February 2012 with the reopening of The Ugadale Hotel.  This historic hotel reopened with much fanfare, and for the first time in many years, visiting golfers have a world-class hotel to stay in when they come on golfing pilgrimages to the area.

The Golf Road Warriors group arrived here yesterday and all were uniformly struck by the four-star standards of this wonderful hotel. 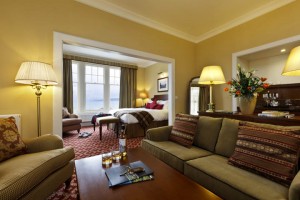 The Duke of Argyll Suite

The Ugadale first opened in the late 1800’s as a small guest house situated on the stunning shores of Machrihanish overlooking the famed first tee of Machrihanish Golf Club.  Known then as The Pans Hotel, much was written about the superb hospitality and comfort afforded there.  Frequented by golfers and the Scottish ‘elite,’ the bustling area flourished and the hotel quickly expanded to accommodate.  Shortly after a program of renovations was made, an unfortunate fire ravaged the wooden expansion of the hotel in 1898 and it was gutted.  The hotel reopened as The Ugadale Arms Hotel and it was soon regarded as the pinnacle of luxury accommodation in the west of Scotland.  The Ugadale Arms was a grand and splendid traditional hotel, and in its heyday, regularly welcomed captains of industry and their families, who descended on Machrihanish for summer holidays.  The hotel continued to provide extraordinary service and lodging through the years under different monikers but eventually closed its doors to the public in the 1970s.

Today, it has reclaimed its former glory, and along with The Ugadale Cottages, offers visitors to the Village world-class accommodations.  When The Ugadale reopened in February 2012, more than 1000 area residents came through its doors on opening day just to see what had been done with the place.  They found it to be every bit as magnificent as they could have dreamed. 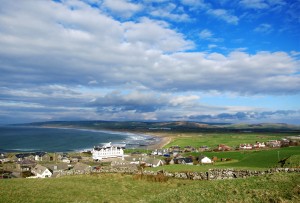 Is this a magical setting for a golf hotel or what?

In the hotel, you’ll find 22 beautifully appointed guest rooms and suites, each with tis own unique payout and character.  There’s a nice boutique spa, as well — the Serenity Spa, offering all the usual spa treatments.  There’s a nice fitness room, too, with weights and cardio workout equipment.  And for dining, there’s The Kintyre Club (see separate story), a private dining club restricted to members and hotel guests that serves exquisite fare.  If you can swing, it, stay in the Duke of Argyll Suite – a beautiful, second-story suite of rooms that offers stunning views of the Atlantic, the beach and the famed first tee at Machrihanish GC.

This is going to be a hard place to leave on Sunday.