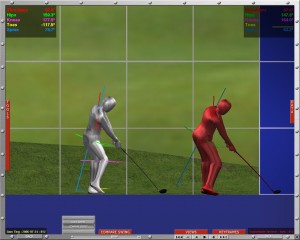 It’s time to tell you about Noel English. the Guru of Gear at Reynolds Plantation. A Liverpool native, Noel pursued a golf career far and wide until he ended up in the TaylorMade Performance Lab here at mighty Reynolds. Our Georgia platoon of Golf Road Warriors was in need of a volunteer from among the four of us to undergo the techno-fitting experience Noel administers, and I stepped forward.

This was a driver fitting. To cut to the punch line, a major spin-rate problem was discovered by Noel’s system of sensors and trackers and fixed it, but good. A TaylorMade R-11 with 9 degrees of loft and R-flex Aldila RIP 60 shaft was crafted right on premises and delivered to me 16 hours after the fitting session ended. It ended up extending my driver distance from about 225 yards to a little over 250.

Inside the Performance Lab, Noel was looking at my driver swing speed of 93.8 mph and telling me there was power loss between that amount of velocity and the carry yardage my old driver (just five years old, but that’s like 20 in driver-technology years.)

That image you see shows a “motion capture” of Fred Funk on the right, and a mere mortal on the left. That’s the moment-of-truth position, too, in which people like me who otherwise have decent swings are “standing up out of the shot” when the tour-caliber golfer is keeping his bend at the hips.

But hey, that’s why clubfitting using this technology is such a huge advancement. It will find you a set of specs that cuts out any compensating moves you might be making and then optimizes the swing action you’re able to produce.