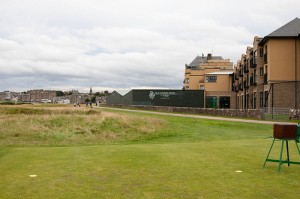 The tee shot at the 17th already calls for hitting over a building and skirting a hotel, so why not hit from out of bounds, too?

Some thoughts heading into the British Open:

A new tee has been built for the 17th hole, adding 40 yards to make it a 495-yard par four. There has been much gnashing of teeth about the change from those who don’t like seeing one of the most famous holes in golf tampered with.

Some of the criticism is leveled at the fact that the new tee is located in an area that is used as a practice range and is out of bounds as the Old Course is generally played. But is that really inappropriate? Remember, the Road Hole calls for a tee shot directly over a stone wall and a restored building that used to be railway sheds to a fairway that can not be seen. A hotel looms out of bounds to the right. A road and a stone wall are very much in play behind the green. I’d say that hitting the tee shot from out of bounds and over a road fits right in.

The change was necessary to make the 17th play like a long par four again after the increase in driving distance by the pros over the last decade-and-a-half. Pros were hitting short-iron second shots in 2005, which used to be unheard of except in severe downwind conditions. Many were hitting less than a driver from the tee.

Interestingly, the difficulty never really changed. Even in 2005, the 17th played to an average of 4.63, right in line with averages of 4.65, 4.62, and 4.71 in the previous three Opens. The growth of rough on the left side—“growth” in terms of both length and encroachment into the fairway—probably had something to do with the continued high scoring averages. Lengthening the hole seems a better solution, enabling the rough to be scaled back somewhat.

After playing it in practice rounds, most players have spoken in acceptance of the change. But U.S. Open champion Graeme McDowell said the hole would now be “brutal,” and also less interesting because players would tend to play conservatively to the front right of the green on the second shot rather than daring to steer between the deep bunker that guards the left and the road that guards the right on the back portion of the green, where the flag is usually located.

R&A head Peter Dawson, on the other hand, had said the change would bring the road more into play than it was when players were hitting shorter clubs into the green.

There may be truth in both statements. More players will certainly play it cautiously—which represents the way the hole used to be played. When Nick Faldo won on the Old Course in 1990, he played short and right on the 18th every day, essentially playing it as a par four-and-a-half. But unless it’s playing into the wind, many players will be hitting mid-irons into the green—still tempting enough that many will still have a go at the flag.

UPDATE: Watching the first round, I was struck by how natural the tee looks. They made it look like it belongs there, not like it’s stuck on another property. And they made a good move by declaring the whole area in bounds for shots into the 16th green as well as in play of the 17th (a move they didn’t make until Wednesday).

Also, I should emphasize more that the new tee puts driver back into the players’ hands. What they did in 2005 was to make the fairway extremely narrow past what had been the traditional “landing area.” But with the increased driving distance of this era, players would have been hitting their drivers into that narrow place from the old tee, and thus were practically forced to lay back. So, the 40-yard difference doesn’t necessarily translate into hitting two clubs more into the green, but it does mean forcing them to hit a good drive off the tee instead of a safer shot with a 3-wood or hybrid.

Like many, I’m not quite sure I’ve gotten over the fact that then-59-year-old Tom Watson didn’t win the Open at Turnberry last year. If only that approach shot to the 72nd hole hadn’t bounced over the green!

Leave it to Watson to put it in perspective. He said got over it very quickly, and this week he has talked about his rationale. In the big picture, he noted, he has won some major championships that perhaps he shouldn’t have won and lost some that perhaps he should have. That made it easier to take. OK, I’ll buy that, though it’s a rationale that works better for an eight-time major champion than it would for most.

Another bit of perspective is that Watson isn’t the only one who can look back at Turnberry and wonder what might have been. Young Englishman Chris Wood watched a nine-iron from the rough sail 220 yards—farther than he dreamed it could go, even with a flier lie—and end up in the long grass behind the green, with a nearly impossible up-and-down. He bogeyed and finished one back. Lee Westwood charged a birdie attempt on the 72nd hole that he thought he needed, ended up three-putting, and then lost by only one when Watson bogeyed.

All of that is well and good. And Stewart Cink is a heck of a nice guy. But wouldn’t it be great if Watson had won that championship?

There are a few notions about Tiger Woods that I’m not buying this week.

If everything was right with Tiger, he would be a lock to win at St. Andrews. Yes, he’s two-for-two there. But nobody is a lock to win any tournament on any course. Even in the most favorable circumstances, I can’t see any player ever being better than a 50-50 proposition to win on any course.

This is the most important tournament of his career. The idea seems to be that since he’s coming to St. Andrews, this is Woods’ best opportunity to get back on track. Also that if he doesn’t win, he’s blown a golden opportunity and his chances of matching or surpassing Jack Nicklaus’ major championship record are greatly diminished. If he can’t win here, he may not win anywhere, the thinking goes. Granted, this does represent an opportunity. But if it takes Woods a while longer to get things back together, physically and mentally, he could just as well start on the comeback trail in 2011—or at Whistling Straits next month.

Woods can’t win this week because he isn’t playing well enough. I could point to his fourth-place finishes at the Masters and U.S. Open as proof that he’s perfectly capable of winning the British Open. But I don’t need to. The fact is that form is a highly variable thing. There are numerous examples of players missing the cut one week and then winning the next. That’s the way golf is. You can’t watch a player one week and predict with any certainty how he will play the next. Tiger Woods included.