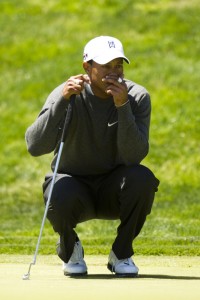 Tiger Woods has yet to post a winning record in team play in any Ryder Cup. Copyright USGA/John Mummert.

The record is there in black and white: Tiger Woods is 7-12-1 when playing with a partner in the Ryder Cup. In five Ryder Cups, he has never been better than 2-2.

Granted, partnership records in match play aren’t always reflective of how an individual has performed. The won-loss statistics are affected by how well your partner plays and how well your opponents play. But 20 matches is not a tiny sample size. It would be improbable to play great golf and still come away with that record over that many matches.

I remember when Woods was a rookie in 1997, starting his Ryder Cup career with a Masters victory already under his belt. Considering that he was an absolute killer in match play as an amateur, I envisioned that the Tiger Woods Era would be a tough haul for the Euros in the Ryder Cup. I figured Woods to typically go 4-1, 4-0-1, or even 5-0 in the Ryder Cup, leaving Europe with a deficit that would be hard to make up elsewhere.

Boy, was that wrong. Woods has a losing record (10-13-2, including singles) and Europe has won four of the five Ryder Cups that Woods has competed in. When he sat out with an injury in 2008, the U.S. won.

The inevitable conclusion is that Woods isn’t as motivated for the Ryder Cup as for other events, and that he doesn’t play well with others.

The man himself has given us a couple of notable indications of the former. He once said that he had “a million reasons” (first-prize money) to prefer the WGC-American Express tournament to the Ryder Cup. And he once quizzed golf writers about whether they knew Jack Nicklaus’s Ryder Cup record, as a demonstration of how much more important major championships are to a player’s legacy.

Not playing well with others is more of a matter of speculation. But it’s certainly a plausible theory that lone-wolf Woods thrives on a me-against-the-world mentality that doesn’t transfer very well to team competition.

Let’s pause to note here that Woods isn’t the only American player with a poor record in Ryder Cup partnership play. Phil Mickelson is 7-10-6 and Jim Furyk is a horrid 4-12-2 with a partner (compared to 4-1-1 in singles). No one would accuse Furyk of being the type of personality who wouldn’t play well with others.

Part of it must be that the Europeans are so good at team play. Here are the Presidents Cup records those three Americans have compiled against the International team from the rest of the world: Woods 14-9-1, Mickelson 13-10-7, and Furyk 11-8-3.

But Woods is not excused. Let’s not forget that he has compiled his losing Ryder Cup record while being the best player in the world by a wide margin. And even if you include his Presidents Cup play he has a .500 record in foursomes and four-balls: 21-21-2. Not exactly Tiger-like.

The search for the right partner for Woods has been never-ending. At his first Ryder Cup, the answer seemed obvious: captain Tom Kite put Woods with his friend and mentor Mark O’Meara. They got off to a flying start with a four-ball win over Colin Montgomerie and Bernhard Langer—and promptly got blown out by Monty and Langer in the afternoon foursomes. After a four-ball loss the next morning made it 1-2 for the team that the U.S. hoped would be its bellwether, Kite rested O’Meara in the fourth match, Woods getting a half with Justin Leonard as his partner.

O’Meara was on the team in 1999, but captain Ben Crenshaw didn’t put him with Woods. (O’Meara’s form wasn’t very good at the time, and he played in only one match before the singles.) The first day brought a foursomes loss with Tom Lehman and a four-ball loss with David Duval. Crenshaw continued to mix things up, and Woods got a win with Steve Pate in foursomes on Saturday. Figuring he’d found a good thing, Crenshaw stuck with Woods-Pate in the afternoon, but they went down to defeat.

In 2002, it was another discouraging 0-2 start for Woods, with veterans Paul Azinger and Mark Calcavecchia as his partners. At this point, his team record was 2-7-1. Captain Curtis Strange finally found a winning combination the second day, as Woods teamed with Davis Love III to win two matches.

At Oakland Hills in 2004, of course, captain Hal Sutton had his idea that Woods and Phil Mickelson would make up an unbeatable team in the mold of Jack Nicklaus and Tom Watson (4-0 in the Ryder Cup). Um, not exactly. Mixing about as well as oil and water, the top two players in the world went 0-2. Paired with one of the lesser lights on the team, Chris Riley, Woods won in four-ball the next morning. When Riley begged off playing in the afternoon because he was tired (though Sutton may have misunderstood him), Sutton went back to Love, but he and Woods couldn’t replicate their 2002 success, losing their match.

There was no experimenting in 2006. The previous year in the Presidents Cup, Woods and Furyk had gone 2-1. What’s more, they seemed to blend well, and expressed a desire to play with each other. It looked like the answer for Woods had been found at last (and you could say that for Furyk, too, considering his team record). Well, only sort of. Captain Lehman sent Woods and Furyk out for four matches, but they only went 2-2, which was not enough to stem the European tide in Ireland.

Furyk and Woods went 1-1 in the 2007 Presidents Cup. In the 2009 Presidents Cup, it looked like a new answer was found. Woods teamed with Steve Stricker to go 4-0. They seem a bit of an odd couple, the intense Tiger and the easygoing Stricker, but they clicked.

Captain Corey Pavin will almost certainly send them out together this week, maybe for all four matches. It will be interesting to see if he sticks with them if they lose. And to see if Woods plays all four matches. He has never sat out a session, but coming into the Ryder Cup with no top-three finishes all year, and as a captain’s pick, he certainly doesn’t have the 2010 record of a guy who’s certain to play every session. On the other hand, he owns 14 major championships, and Pavin would court controversy by sitting him.

It would be odd if in this, his worst year, Woods would actually post his first winning record in team play at the Ryder Cup. It’s not out of the realm of possibility. His game has been on the upswing in his last three starts, and it’s possible that working on his swing with new teacher Sean Foley over the last couple of weeks will pay dividends. And with this year having been such a washout for him, he might be more focused on the Ryder Cup as a way to get something positive out of the campaign.

There also might be something to what Woods said this week about his comfort level at fitting in with the team now that he is a veteran. His record has been better lately. Combined Ryder and Presidents team-play record through 2004: 10-17-1. Since 2005: 11-4-1. True, the latter figures include three Presidents Cups and only one Ryder Cup (2-2). Now we’ll see what happens on the Ryder stage.

Not to overlook Woods’ singles record, he is 3-1-1 in the Ryder Cup. But due to the luck of the draw, he has never faced one of Europe’s top players—his opponents have been Costantino Rocca, Andrew Coltart, Jesper Parnevik, Paul Casey (as a Ryder Cup rookie), and Robert Karlsson. That’s about the worst record you could expect from the world’s No. 1 player against that group. Woods’s record in the Presidents Cup has been more impressive, when you consider the opponents: He’s 4-2, with wins against Greg Norman, Vijay Singh, Ernie Els, and a revenge win against Y.E. Yang (the losses were to Retief Goosen and Mike Weir).

In team Ryder Cup play, Woods has generally been given partners who were among the better players on the U.S. team, but he’s actually fared well when given a partner of whom it could be said he would need to carry (1-1 with Pate, 1-0 with Riley).

His opposition has generally been strong. Woods has gone up against Lee Westwood six times in partner play in the Ryder Cup, and Westwood owns him 5-1. Other players with winning records in multiple matches against Woods are not on this year’s European team: Sergio Garcia 3-1, Darren Clarke 3-2, and this year’s captain Montgomerie 3-2.

Members of this year’s team besides Westwood who have faced Woods are Padraig Harrington 2-3, Luke Donald 1-0, and Ian Poulter 0-1.

As I was writing this, the opening four-ball pairings were announced, with Woods and Stricker matched against Poulter and Ross Fisher. That should be a good chance for an American victory. Poulter has a good match-play record and was great in the 2008 Ryder Cup, but he hasn’t been playing all that well lately, and Fisher has been up and down this year.

Eyebrows will be raised at Pavin keeping Furyk out of the Friday morning lineup, while sending out Bubba Watson and Jeff Overton as a team. I’m not sure I agree with putting Watson and Overton, two potentially shaky players, together. Or with sitting Furyk.

However, there is this in Pavin’s defense. Furyk’s record in Ryder Cup four-balls is 1-7-1. He’s clearly a better foursomes (alternate shot) player, while the mercurial Watson is more of a four-ball player. Overton has been in a slump for a month, so you might not want him in alternate shot, either.

If Woods-Stricker and Mickelson-Dustin Johnson were locks as partners and Georgia Tech guys Stewart Cink and Matt Kuchar also a natural pairing, that left Watson and Overton, if your plan is to play all your players on the first day and you didn’t want to play them in foursomes (though I would have considered keeping Overton on the bench on Friday and pairing Furyk with Watson). Maybe Watson and Overton will come out with something to prove.

One Response to “Tiger’s partnership issues”