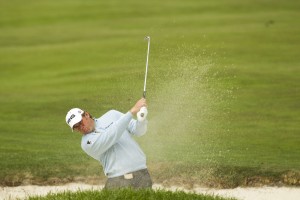 Lee Westwood is on top of the world, but for how long? Copyright USGA/Steve Gibbons.

In a moment that has been ever-so-slowly approaching since last Thanksgiving weekend, Tiger Woods has lost the No. 1 world ranking.

Realistically, Woods hasn’t been a legitimate No. 1 for a while now. On the other hand, nobody else has been a clear No. 1, either, but “vacant” isn’t an option for the top spot in the Official World Golf Ranking.

I happen to like the two-year world ranking system because even though it goes by the cold, hard numbers, it’s usually accurate at identifying who we feel in our bones is the “best player” in the game. This is not always the same as the player who is having the best year.

A case in point was 1998. Mark O’Meara won two majors that year and was deservedly the Player of the Year. But did we think of him as the best player in the game at that time? I didn’t. Tiger Woods was No. 1 at the end of that year, having taken over from Greg Norman and with David Duval waiting in the wings. While O’Meara was a very good player having a career year, the others all validated their “best player” status with performance over a longer span.

The year 2010 has been problematical. Woods started the year at No. 1 by a wide margin after winning seven times (six on the PGA Tour) in 2009. Then came his car crash/scandal/disappearance from public view/ followed by a tepid comeback.

Over the first half of the year, Woods was always going to be tough to catch in the ranking. It would have taken a fabulous showing by someone close to him in the standings. Phil Mickelson got part of the way there with his Masters victory, but couldn’t follow up on it. Lee Westwood threatened at both the Masters and Players Championship, but couldn’t win either one. Meanwhile, Woods managed fourth-place finishes at the Masters and U.S. Open, doing just enough to hold everyone at bay.

As Woods struggled through the summer, the door was swinging wide open but nobody walked through. Westwood was the most consistent player in the big events (on top of a similar showing in 2009), but managed only one victory, that at the St. Jude Classic, a PGA Tour event with a mediocre field (and, besides, it was a gift from Robert Garrigus’ triple bogey on the 72nd hole), and then was sidelined with a calf injury. Graeme McDowell and Louis Oosthuizen each combined a major championship with a 2010 win on the European Tour. But neither had played well enough heading into this year to be anywhere close to No. 1 either by the numbers or the hearts and minds of observers.

Then along came Martin Kaymer, who did the same thing as McDowell and Oosthuizen—added a major (the PGA Championship) to an earlier European Tour win. But Kaymer was coming off a solid 2009 (two European Tour wins and some good showings in majors). When he added another European Tour win on the heels of the PGA, he became a legitimate contender for No. 1 honors.

In the end, it was Woods’s decline more than anybody else’s rise that led to a changing of the guard at the top of the ranking. And at the point it happened, Westwood was the player in position to take over.

Is Westwood the best player in the world? With his trouble getting into the winner’s circle, and no major titles, you might not think so. But with two seconds and two thirds in majors in the last two years and a win at the season-ending Dubai tournament in 2009 highlighting his consistently very good play, it’s enough to give him the nod when there’s no obvious choice out there.

Kaymer is clearly the international Player of the Year in 2010. But I’m not sure he’s the best player yet. While the world ranking gives a number-crunching answer of Westwood, the Ryder Cup provided a “hearts and minds” answer that agreed. With Westwood and Kaymer both members of the European team, who was clearly the alpha dog? Westwood.

It’s very close, though. And with the top four players in the world ranking (Westwood, Woods, Kaymer, Mickelson) tightly bunched and all in the field at this weeks’ WGC-HSBC Champions in China, the No. 1 ranking is very much up for grabs, and could be for a while. Woods, who has shown signs that he’s getting back on track, could make it just a one-week absence from the top. Mickelson is playing in his 13th straight event where a victory would make him No. 1. Kaymer is hoping that his hot streak that began in August ultimately earns him the top spot, and Westwood is looking to prove he belongs there.

Will one of them make the leap and take control of No. 1 status for a prolonged period? Or will they trade it around for a while? We’ll begin to find out this week.

Luke Donald in second place?! Maybe world ranking points aren’t the best way to settle it. But Westwood missed some time with his injury and is second if you go by points per event. To give Donald his due, he has a victory on the European Tour at the Madrid Masters to go with a second at the European PGA Championship and three runner-up finishes on the PGA Tour, including the Tour Championship. And anyone who watched Donald at the Ryder Cup knows that he’s an elite player, although relatively poor driving (he’s short off the tee but not very straight, either) has held him back from winning more tournaments.

Woods, by the way, is 63rd in 2010 world ranking points. So, while he started this year with a considerable advantage, he will be at a disadvantage next year in trying to reclaim the No. 1 ranking. Of course, if he regains his old form, that won’t matter.