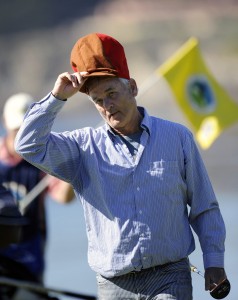 You know it was a weird week in golf when Bill Murray held up under pressure better than Tiger Woods on Sunday. Much better.

Murray’s appearances at the AT&T Pebble Beach National Pro-Am usually end on Saturday when the cut trims all but the top 25 of the 180 pro-am teams. This time, though, he not only made it to Sunday, he was in the next-to-last group with partner D.A. Points.

As an actor and comedian, Murray is used to the spotlight. But he’s not used to having a packed gallery and a television audience of millions watching how he performs with a tournament on the line. Murray is a 13-handicap with a nice golf swing. But when 13-handicappers get this far out of their comfort zone, the result usually isn’t pretty.

Murray didn’t wilt, he blossomed. While Points took the individual title thanks to a 4-under 32 on the back nine, Murray held up so well that he combined with his partner to win the two-man pro-am competition. Yes, it was a Cinderella story.

On the other side of the globe, Woods entered the final round of the Dubai Desert Classic one stroke out of the lead. Here was a chance for his first victory in 15 months, a chance to show that recent work on his swing with new teacher Sean Foley was paying off, a chance to show that he was back to being the real Tiger Woods on a Sunday afternoon. And he laid an egg, shooting a 75 that dropped him into a tie for 20th.

After the round, Woods said, “When the wind blows, I have to shape shots and hit shots differently and all my old feels are kind of out the window.”

It was a bit of an odd statement, considering that in heavier winds on Saturday Woods had moved up the leaderboard by shooting a 72 while others faltered. The difference on Sunday was that he was trying to close out a tournament.

The old Tiger Woods was at his best when the tournament was on the line. But the current Tiger Woods is still trying to regain his equilibrium after last year’s self-induced turmoil while also trying to reach a comfort level with his swing changes. Neither one translates to iron-clad confidence down the stretch. On Sunday, Woods opened with bogeys on two of the first three holes and was never a factor.

Woods drew more attention for spitting on the 12th green than he did for his play in the final round. We have seen Woods spit on the course before, eliciting varying degrees of public disapproval—some are no more concerned than they are by baseball players spitting in the dugout, others are outraged. But this one was different: it was on the green. And fairly close to the hole, at that, which means it was possibly on the line of putt of a player in a following group. That’s inexcusable by any standards. So, Woods needs improvement in his game and his behavior. Frankly, I think the former is more likely.

Murray’s comportment on the course has also come under fire at times, though in his case it’s for having too much fun, not showing too much anger. Murray started playing at Pebble Beach in 1992 and his antics—particularly his interactions with the gallery—have been a big draw for the tournament. But PGA Tour Commissioner Deane Beman wanted to ban Murray after the 1994 event for “inappropriate and detrimental behavior.” Fortunately, Tim Finchem, who took over from Beman later in 1994, disagreed and made a point of welcoming Murray.

Over the years, Murray has not been fully embraced by the tournament or CBS television. There were a number of years when he was not placed in the feature pairings who play Pebble Beach on Saturday in the three-course rotation, and thus he was not featured on the broadcast. CBS was more focused on promoting the stars of its own network shows like Ray Romano, while Murray was out playing in the pro-am equivalent of Peoria (Spyglass Hill or Poppy Hills).

Speaking of Peoria, Points grew up about ten miles from that central Illinois city, which had something to do with him getting paired with Murray, a native of Chicago. Points was a fan of Murray’s movies and felt that it would be a neat all-Illinois pairing, so he asked for Murray as a partner.

Points doesn’t come off as a yuk-yuk type, but neither did Murray’s long-time former partner Scott Simpson. And playing with the comedian may well have contributed to the 34-year-old claiming his first PGA Tour victory.

While some might view playing with Murray as a distraction, Points gave that a positive spin. “It distracted me from trying so hard. It made my week playing with Bill, whether I got to hold the trophy or not,” he said.

Points is one player who understands the importance of making some connection with the fans. If he’s known for anything on the PGA Tour, it’s for shouting out to fans at after finishing his round, “Thank you for coming!” Other than that, he’s not really a Lee Trevino type who banters with the fans while he plays, but we might see more of that now.

“When I’m more chatty and outgoing, it helps me,” Points said after winning on Sunday. “You look at Rocco Mediate and Peter Jacobsen and other guys that I look up to, even Mr. Palmer, he had his army. When he was in that mode, everybody spurred him on to play better. And I think that’s something that I need to be better at instead of just boring walking down the fairway, minding my own business and not saying anything.”

Humor helped Points at a critical moment on Sunday. He assumed the lead with a stunning hole-out for eagle on the 14th hole and followed with a 30-footer for birdie on the 15th. But he admitted he felt nervous playing the 16th hole, where he missed the fairway and the green. He faced a six-foot putt for par, but first Murray had to hit a longer putt. “Bill, I think the the gallery would really appreciate it if you knocked this in,” said Points, echoing a line Murray had used on him earlier in the tournament.

The crowd laughed, and Points said, “It took me just out of the moment for just enough to kind of help bring me back to life a little bit.” He made the par putt and settled down on the last two holes for a two-stroke victory.

As for Murray, he said he was trying to be funny where appropriate (like handing out ice cream to the gallery on the 17th hole), but his main goal on Sunday was to not get in Points’ way of winning the tournament. “I just thought, if I could not screw this up for him that would be great,” Murray told the press after the round (yes, he went to the interview room.)

While distracting with comedy wasn’t an issue, Murray was worried about being a distraction with bad golf. “If you’re hitting it bad, and you’re playing with a real human being, they get concerned about your golf and they get distracted from their golf. So as long as I kept going forward, hitting pretty good shots, maybe not scoring, then he didn’t have to think about me and could sort of focus.”

Murray was serious enough about the tournament that after being disappointed with the way he hit the ball in the first round he went to the practice range (Points carried the team that day with a 63). No surprise, Vijay Singh was there. More of a surprise, he gave Murray a couple of unsolicited tips that immediately straightened him out. “I would never go like, ‘Hey, you big Fijian, help me out here,’ but he sort of saw me struggling and he came over,” Murray said.

The tips worked so well that Murray’s play helped pull the team through the second and third rounds, putting the Points-Murray team in position to win. And in the biggest round of his life, the actor/comedian played well enough not only to avoid being a distraction but to earn the coveted pro-am trophy.

Hmm…maybe Tiger should see Vijay next.