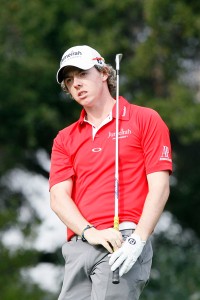 Rory McIlroy was the third 54-hole leader in a major championship in the past year to shoot in the 80s in the fourth round. Copyright Icon SMI.

All are members of the European Tour, where they have played most of their golf over the years although Oosthuizen and Schwartzel hail from South Africa. Only Schwartzel was a member of the PGA Tour when he won, and he had joined only three months earlier, playing a total of five events as a member before his victory.

All were between 25 and 30 years old at the time of victory.

All had never won a major championship before.

All benefited from a leader of the championship shooting in the 80s.

That last fact is perhaps the most remarkable thing of all about the last four majors. Three of those 80-plus rounds were turned in by 54-hole leaders: Dustin Johnson (82) at the U.S. Open, Nick Watney (81) at the PGA Championship, and Rory McIlroy (80) at the Masters, and all of them had either or three- or four-stroke lead. (McIlroy also shot a second-round 80 at the British Open after taking the 18-hole lead with a 63.)

Those results make what Oosthuizen did at the British Open even more impressive—entering the final round with a four-stroke lead, he shot a 71 to win by seven. It almost looked easy, but don’t tell that to Johnson, Watney, or McIlroy. In fact, Oosthuizen is the only 54-hole leader to win in the last eight majors.

I think the 80s shooting is more a coincidence than a trend. Still, it’s interesting that at the U.S. Open three of the five 80-plus scores posted by 54-hole leaders or co-leaders since World War II have come in the past six years (Aaron Baddeley in 2007 and Retief Goosen in 2005; the others were Gil Morgan in 1992 and Marty Fleckman in 1967). Since the PGA Championship went to stroke play in 1958, the only previous 54-hole leader before Watney to shoot in the 80s was Mike Weir in 1999. At the Masters, McIlroy joined only two previous 80s-shooters, Ken Venturi (1956) and Sam Snead (1951).

Of course, there are plenty of examples of 54-hole leaders shooting in the high 70s. It’s all evidence leading through 54 holes of a major is not exactly in the comfort zone.

I’m not one who automatically cries “choke” every time a player blows a tournament. If he lost because he bogeyed a difficult 72nd hole, missed a five-foot putt, or shot a 73, well, there’s a decent chance he could have done any of those no matter what the circumstances. A player is going to shoot a 73, miss a five-footer, or bogey a tough hole more than once in a blue moon. I don’t think there’s really any way to separate out the pressure factor from randomness.

But this 54-hole leader in majors phenomenon is something else. How often does a Tour pro shoot in the 80s? Almost never. (The same goes for all the 77s, 78s, and 79s that have been shot, like Greg Norman’s 78 at the 1996 Masters–his highest score of the year by two strokes). So it’s safe to say that the pressure of leading a major through 54 holes can take its toll.

Winning a major is life-changing, so the pressure is ratcheted up several notches from a regular tournament. Just waiting for a tee time of 2 p.m. or even later can be nerve-wracking. Once you start playing, it can be tough to keep your mind from racing ahead to the award ceremony instead of keeping your focus on the task at hand, and that can be harmful. When things start to go wrong, panic can set in, and that can be fatal. All the while, the demands of major course setup mean you can’t get away with as many mistakes as you could at a regular tournament. The phrase “can’t stop the bleeding” very much applies here.

McIlroy didn’t play so well on the front nine, but he still had a one-stroke lead on the 10th tee. From there, he hit a horribly pulled tee shot that ricocheted into the cabins that lining the hole on the left side, leading to a sequence of misplayed shots that resulted in a triple bogey. Flummoxed, he lost all semblance of putting touch on the next two holes, missing from two feet on each one for a three-putt and a four-putt.

If it weren’t a major, chances are he wouldn’t have hit that tee shot at the 10th. But even if he had, it’s likely he wouldn’t have taken seven putts on the next two holes. That’s what major championship pressure can do—turn 73s or 74s into 80s.