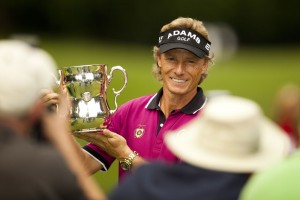 Bernhard Langer rightfully hoisted the Ouimet Trophy this afternoon beating hometown favorite Freddie Couples.  Couples undoing was one approach shot on the 2nd hole which went into the water resulting in a snowman (an 8 , just look at the number and you’ll see where the name comes from) which was all of the difference between the two men today.  But you might have figured that Couples was in trouble if you had simply watched the two of them putt out on the first hole.  Langer, last week the British Senior Open Champ, is a great professional with grace and courtesy.  He also takes forever to putt.  I’m sure Couples thought to ask Bernhard a few times if he would mind if he played through.  Aside from saving Couples 30 minutes on the round it might have also saved him a bit of aggravation.

But winning a major is no minor feat even if you’ll never meet the fast play rules.  It’s fun to look at the scores and statistics for Langer and Couples.  Look at how Langer’s driving distance improves as we get deeper in the rounds.  Couples actually had his best scoring day on his second lowest driving day.  In the final round, after Freddie snowmanned my guess is he started reaching for the driver.  That would explain why he had his longest driving distance day in the last round.  He needed to make up three strokes which required longer drives and shooting for the flag.  On the third hole that is exactly what I saw.  Bernhard played it safe with his approach shot to the left.  Freddie aimed dead at the flag with abandon risking a beach trip if he hit just a little more right and into the sand trap.  Fortunately he stuck it close to the pin.

My favorite moment of the round came when Couples birdied the 16th with a magnificent long putt that made a hard right turn from three feet to drain into the cup.  The birdie pulled Couples within two strokes to add to the drama of the final two holes of the round.  But when he walked off the green Langer gave him a high-five.  What a sportsman.  Major golf championship.  History on the line.  Home town hero getting all of the applause while you’re getting ribbed a bit by the fans.  He sinks a great championship match putt which will put some pressure on you for the first time in 14 holes.  You congratulate him emphatically as he walks off the green.  Tiger, take some notes.  This is what golf is about and why I love the game.

One Response to “Bernhard Langer 2010 US Senior Open Champion”