TaylorMade-adidas Golf’s latest addition to its “Ghost Spider” series putter models – the Ghost Spider Si – will be available beginning March 14 at a suggested retail price of $199. TMaG says it’s a high MOI (moment of inertia) counterbalanced putter that is one of the “most consistent and forgiving” putters it has ever produced. 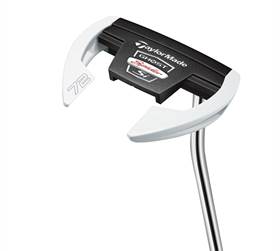 The 380-gram head coupled with a 15-inch, 130-gram counterbalanced grip, according to TMaG, helps promote stability, control and feel.

While the typical putter has one light end (grip) and one heavy end (head), putting more weight in the grip to counterbalance the weight of the head, TMaG says, increases the MOI of the entire club, from top to bottom, which makes it 50 percent more stable and much easier to keep the head on path.

TMaG calls it “Stroke Stability,” but it’s really just another way to wean players off belly putters and long putters. The U.S. Golf Association will ban the anchoring of those putters (or any club) against a player’s body in 2016. Counterbalancing, at last in theory, helps a player maintain that anchored feel and stroke without actually having to pin the club against his or her body.

The Ghost Spider Si, which debuted at the Humana Challenge, has been played on a weekly basis by a number of Tour professionals including Rory Sabbatini, Fred Funk, Retief Goosen and Lucas Glover.

The MOI in traditional blade and mallet putter ranges from 3,500-4,500. TMaG says the Ghost Spider Si has an MOI of more than 6,000 which makes the putter head more resistant to twisting at impact and helps protect ball speed and distance-control on off-center hits.

The Spider Si putter will be available in 35- and 38-inch shafts. The 38-inch length, according to TMaG, is engineered for players who normally play a 35-inch length while the 35-inch model is built for the player who favors a 33-inch length. Players who favor a 34-inch length can choose between 35 or 38 inches.