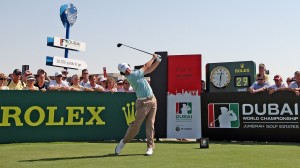 The inaugural Dubai World Championship presented by: DP World attracted bumper crowds this week with more than 58,000 spectators pouring through the gates of Jumeirah Golf Estates for the grand finale to The Race to Dubai.

More than 15,500 golf fans watched Lee Westwood crowned the first champion of both The Race to Dubai and the Dubai World Championship on the final day of the tournament, adding to the 43,000 already seen over the first three days to beat initial predictions for the total attendance by close to 20 per cent.

Westwood won the amazing double at Jumeirah Golf Estates after setting a new course record of 64, eight under par.

“As the grand finale to The Race to Dubai, the Dubai World Championship presented by: DP World is the most prestigious golf tournament to have ever been held in the Middle East and this has been reflected by the big crowds we have seen at Jumeirah Golf Estates on each day of the tournament. “In addition to golf fans, part of our aim was to also attract new audiences to the sport and it’s been pleasing to see so many families and young faces in the crowds this week.”

With all the entertainment offerings at the Dubai World Championship, including an EA Sports gaming area, free golf lessons, retail outlets, bars and restaurants located in the Championship Village and across the course and golf games for junior golfers, the event has had something for everyone.

Edd Beamish, Catering Manager for Emirates Leisure Retail, who is overseeing the F&B offerings in the village and across the course, said Left Bank, the restaurant and bar located on the 17th green, has been a tremendous success.

“Left Bank has been hugely popular with spectators, VIPs and players alike. I’ve worked at golf tournaments across the region and the UK and have never seen a facility located that close to the course – it has just been fantastic.”

The Dubai World Championship has attracted families with young children, newcomers to the sport of golf, as well as young crowds of friends who have all taken advantage of free tickets on each day and enjoyed the spectacular Earth course and sensational line-up of activities and entertainment on offer throughout the week.

Leisurecorp, a division of Nakheel Leisure, announced a long-term partnership with The European Tour in Nov. 2007, heralding a new era for world golf. This partnership includes the creation of The Race to Dubai – a season-long competition which replaces ‘The European Tour Order of Merit’ and culminates in the Dubai World Championship. Held annually at Leisurecorp’s Jumeirah Golf Estates, the Dubai World Championship will be open to players ranked 1- 60 in The Race to Dubai.