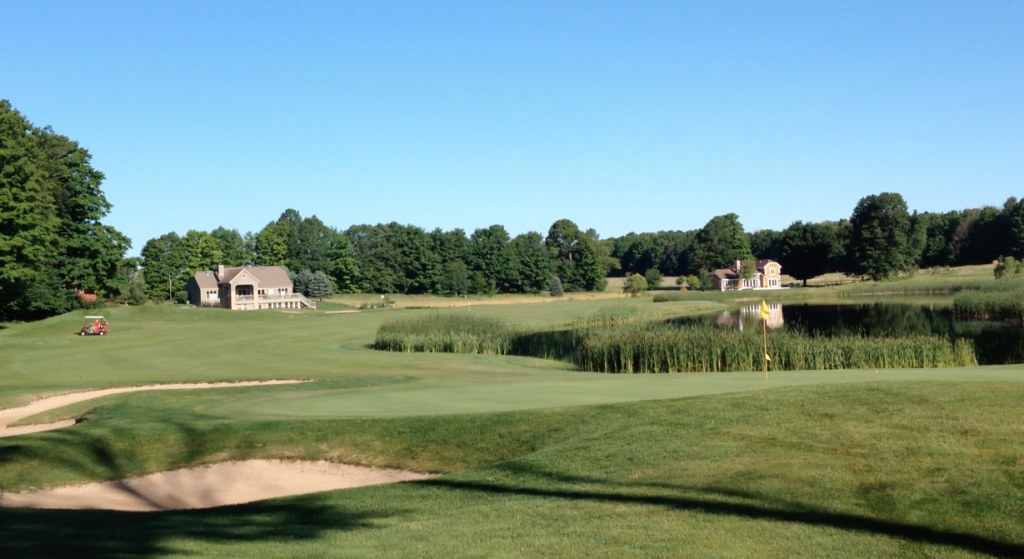 No. 7 at Cedar River, a Weiskopf design. This par 4 bends around a pond.

It’s pretty simple. In Chicago, we’re either Cubs fans or White Sox fans. And when we pile into the car for a getaway, we’re either Wisconsin fans or Michigan fans.

I came by my Wisconsin preference naturally. Growing up in Deerfield, a northern suburb, Wisconsin was practically right around the corner. We often took family day trips to Lake Geneva and Milwaukee. We even saw the Cubs play the Braves when I was really young.

When it was time for college, I went to the University of Wisconsin, a decision that easily ranks among the top two or three in my life.

Even though my wife, Liz, grew up in the south suburbs, she’s also a Wisconsin person, from family camping trips to Devil’s Lake, near Baraboo, when she was young.

As adults, we have become Door County regulars.

In short, everything about us is Wisconsin.

That said, I’ve known for a long time that Northern Michigan is an amazing place for golf. And I like to play golf.

Geographical note: My Michigan friends tell me that the northern portion of lower Michigan is “Northern Michigan.’’ Even though the Upper Peninsula is farther north, it’s apparently the U.P., not Northern Michigan. It works for me. 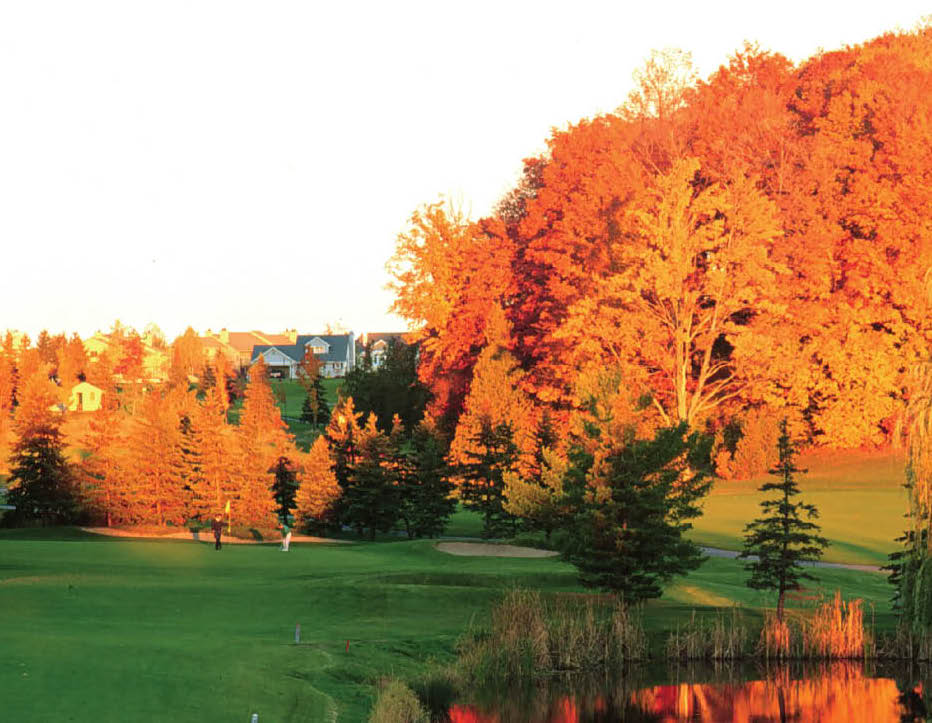 With colors like this and a leaf rule, the upside of fall golf in Northern Michigan is boggling.

I’d read and seen many things about the splendors of golf in the Gaylord and Traverse City areas. But my Michigan golf experience had been confined to the I-94 corridor, where Heritage Glen, in Paw Paw, and Lake Michigan Hills, in Benton Harbor, have been popular stops on my way to Ann Arbor and East Lansing.

That all changed recently, when I joined a Pure Michigan tour of the Traverse City area.

A big hurdle for Northern Michigan tourism is figuring out a way to convince Chicagoans to make that initial drive through the city. Although Wisconsin is more of an open-road deal for many suburbanites, the actual travel distance to Northern Michigan is very favorable when compared with some popular Wisconsin Northwoods destinations.

Our treks to Sister Bay, in Door County, Wis., are about 4-1/2 hours, half an hour closer than Traverse City, which is about the same travel time from Chicago as Rhinelander, Wis.

And while Wisconsin has world-class golf, notably with Whistling Straits, Blackwolf Run and Erin Hills, those are different experiences from a family vacation standpoint, or even a buddies trip. 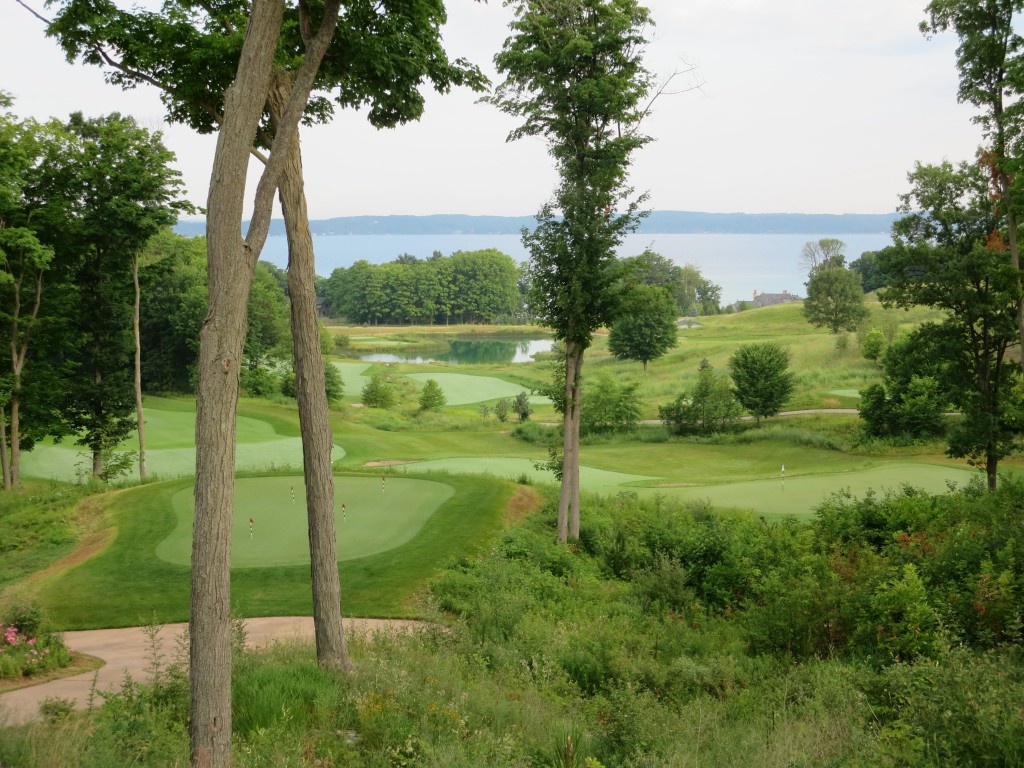 With a view like this, why leave Lochenheath’s clubhouse? An inviting golf course.

Both have their pluses. A big lure of Northern Michigan golf is its abundance, and the multitude of ways to set up a trip with so many value-conscious lodging and activity options.

We played the Bear and the Wolverine, two of the three courses at Grand Traverse Resort, which has a 17-story high-rise tower to house its many golfers. The 238-room tower has spectacular views, especially from the 16th-floor Aerie Restaurant. We played impressive and difficult Lochenheath. Also on the list were A-Ga-Ming Sundance, which might have been my favorite. And finally, we played three remarkable courses at Shanty Creek Resort, a sprawling ski-and-golf property that has a Palmer course, a Weiskopf course, the Schuss Mountain “dogleg’’ course and the Summit course.

Bottom line: It was all as good as advertised.

Amazingly, for all the remarkable golf we saw, there’s a bunch more in Gaylord. Add in hot courses like Arcadia Bluffs and Forest Dunes, and Northern Michigan can back up claim of being “America’s Summer Golf Capital.’’

Where do all the golfers come from? Despite the grim economic news that has seemingly been coming out of Detroit and its auto industry for years, the state of Michigan still has plenty of golfers affluent enough to flock to Northern Michigan. And that’s what they do.

The area attracts players from farther away—steamy Southern cities like Dallas and Atlanta as well as Midwsterners from places like Ohio and St. Louis. Grand Traverse Resort hosted a huge international tournament for deaf golfers while we were there. But Michigan golfers dominate the area.

They don’t lack for golfing choices. The courses where we teed it up are evidence of that.

Like their architects, the Bear, a 1985 Jack Nicklaus design, and the Legend, a 1986 Arnold Palmer design, dueled for the top of the Northern Michigan leaderboard when they opened.

That focus has diminished, of course, with so many new kids on the block. But both remain really fine and challenging golf experiences.

That’s especially true on the 376-yard fifth hole, which plays longer because of a serious forced carry to the green, even with a well placed tee shot. But there is more bail-out room than you think. I’ll remember that next time.

The Bear also has a bunch of nice sweeping holes that are shaped around its water hazards. And after some tight wooded looks on the front nine, it opens up considerably on the back nine. 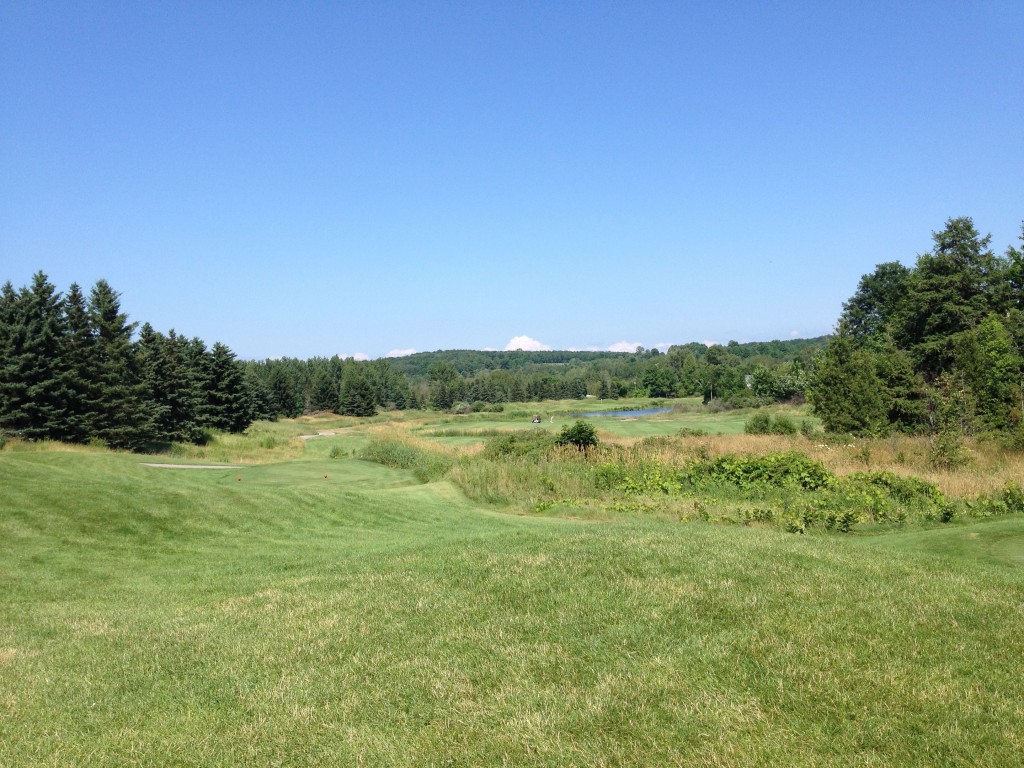 No. 5 tee at the Bear. Yes, there is a fairway and a green out there.

This 1999 Gary Player is simply a really nice resort course, especially if you play it from the right tees.

Testing shots are mixed with forgiving spots. The terrain gets more interesting on the back nine, where No. 16 is a gem. An uphill dogleg right tee shot leads to a downhill approach to a green guard by a large sandtrap.

In short, the Wolverine is ideal for that second round of the day, which happens frequently in Northern Michigan.

This is a big, beautiful golf course that makes great use of its terrain changes. From the contours of the golf course to the water views of Grand Traverse Bay beyond it, the views are spectacular.

It’s also a very difficult course, especially because of its false fronts and slick greens. This might be a golf course to play more than once, to get the hang of it.

Lochenheath also has a remarkable kitchen—and a patio dining area with panoramic views of the golf course and the bay. 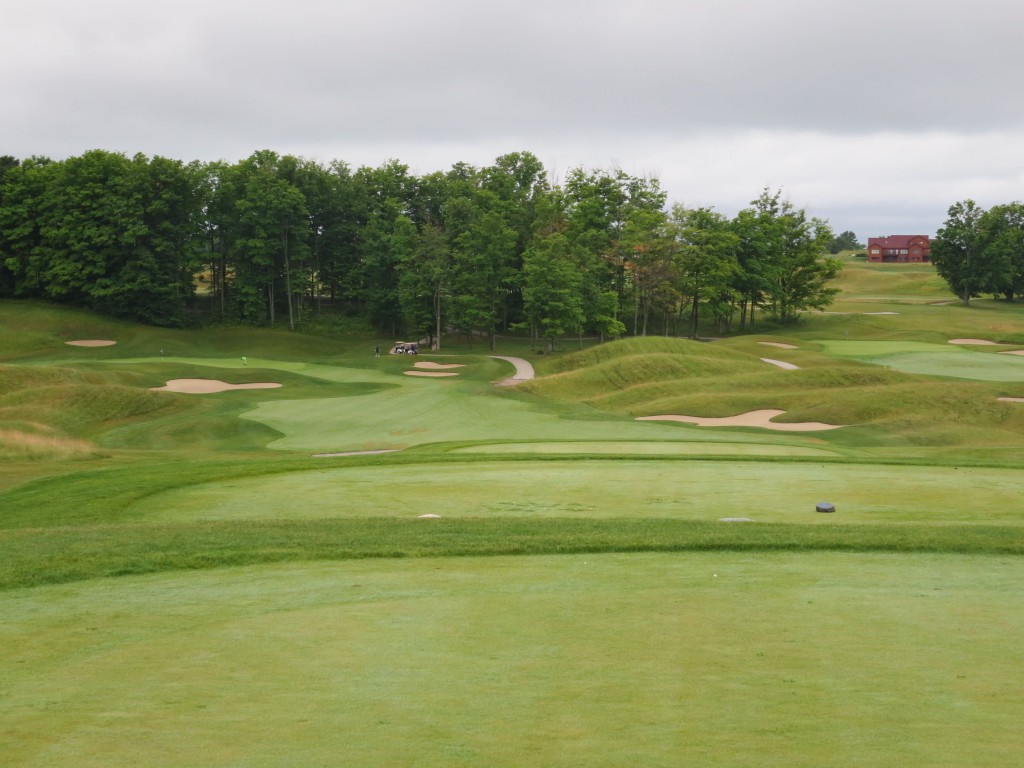 Yet another outstanding golf course, Sundance takes advantage of its rolling terrain, and still is wide enough in most places that golfers will have options.

Sundance has a great set of holes. No. 1 is a nice opener with a forgiving tee shot followed by an approach to a wide but well-guarded green. No. 3 is a rock-lined par-three to an undulating green with good places for sucker pins.

No. 9 is a majestic dogleg par five that begins with an inviting downhill tee shot and ends with a challenging approach to an elevated green. All in all, very nice stuff.

Sundance is one of three golf courses at the A-Ga-Ming Resort, which has a variety of stay-and-play condo packages.

Ups and downs are the name of the game at the Palmer-designed Legends course, which plays longer than its yardage, especially on the day after the rain we saw.

No. 2, for example, is a mere 350 yards from the tips, and only 273 yards from the white tees. But the tee shot is straight up, and there’s nothing but trouble between the tee and the ski-able fairway.

In other words, golfers are advised to choose their tees well. There’s a reason the blues are only 6,269 yards and the whites are a mere 5,801 yards.

On the bright side, Palmer did a really nice job of making sure the downhill holes outvoted their uphill friends.

Schuss Mountain is a ‘70s resort layout that’s a bit of a sleeper. It starts off very unassumingly, especially with a pair of short opening par fours.

But it gets more interesting, and more challenging, as it moves along through increasingly hilly tree-lined terrain. The blue tees measure a solid 6,922 yards, and even the whites (6,394 yards) have their share of healthy holes.

The course has no less than 10 dogleg holes, including the double-dogleg 11th hole. With three par threes that play long, this is a ball-striker course. On the other hand, it’s open enough to let you play.

I didn’t have an opportunity to play Shanty Creek’s fourth course, the Summit. It features FootGolf, which is basically golf played with a soccer ball.

I’m a little old for that sort of thing, but I’d pay to see Tiger and Phil do it. It not only sounds like a good way for kids to burn off some steam; it’s an interesting way to expose athletic youngsters to the world of golf. 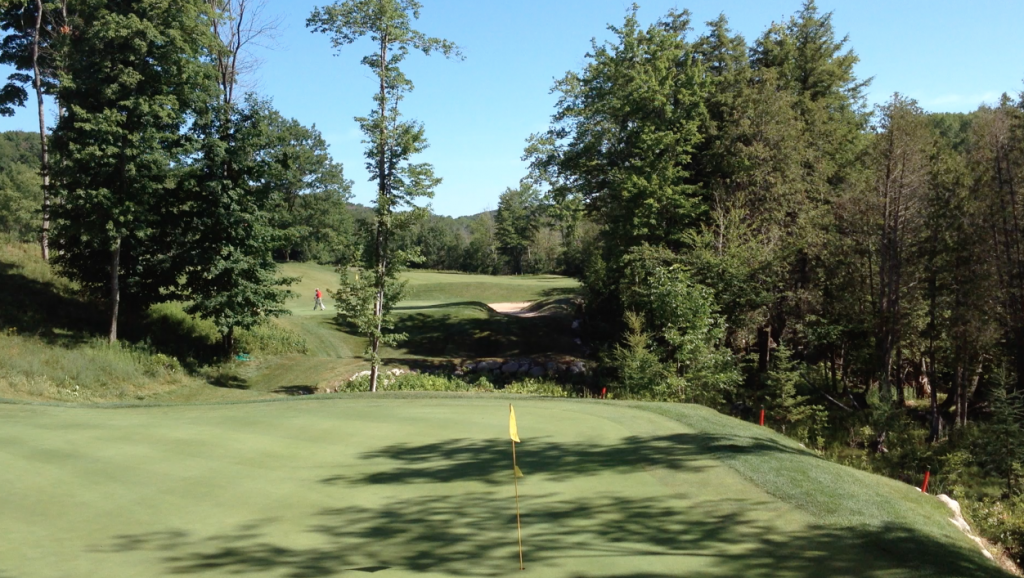 As entertaining as Palmer’s Legend is, Cedar River, a 1999 Tom Weiskopf design, has become the cleanup hitter in the Shanty Creek lineup with good reason.

Uphills. Downhills. One interesting stretch comes on the middle of the back nine.

No. 13 is a driveable blind-shot par four. The catch is, the ball needs to dodge a tree and several bunkers on the way to a sunken green. But if it does, it ought to roll onto the surface. No. 14 is a downhill par three where long and left is no-man’s land.

Water only comes into play on a few holes, notably picturesque No. 7, which plays over and around a pond, and No. 18, roller-coaster par-five finishing hole.

All in all, there are an impressive number of compelling golf options at “America’s Summer Golf Capital.’’ Throw in an abundance of wineries, micro-breweries and a wide variety of water-related activities—and Northern Michigan is an area that demands return visits.

We won’t break our Wisconsin mold completely. But Michigan will be in the lineup in the future.