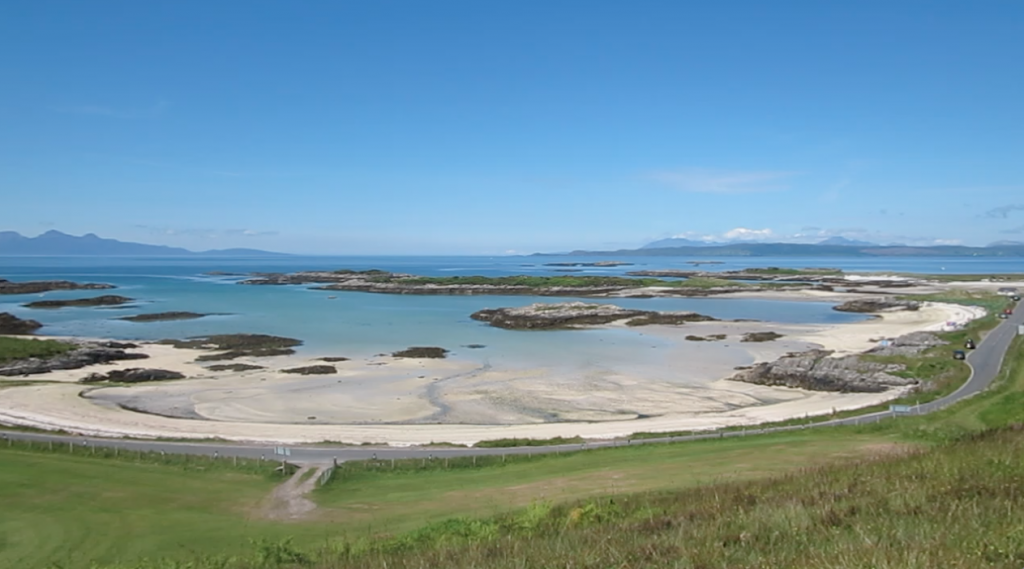 With views like this from its hilltop perch, Traigh is a scenic beauty.

I can hardly wait to describe Traigh, a remote and wonderful nine-hole course on the west coast of Scotland. But first, a little chronological preamble. . . 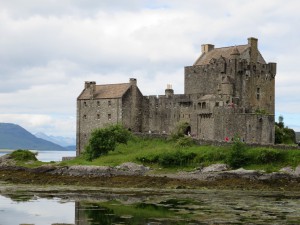 It may sound like heresy to suggest that an occasional day off on a Scottish golf trip is a good thing. Even I probably wouldn’t do it on a buddies trip.

On the other hand, a day off can be a great way to play better golf, and enjoy it more, by clearing your head. And Scotland has all kinds of interesting diversions, from photogenic castles to educational distillieries to scenic hiking. 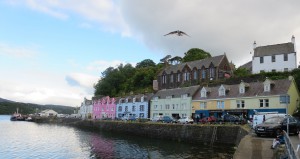 Because hiking on the Isle of Skye was high on Liz’s list, we took a golf break,

driving to Skye from Nairn. It’s a beautiful three-hour drive on pretty good roads, and there’s a bridge to the island. There’s even time to check out the photogenic Eilean Donan Castle, which was featured in Highlander, a 1986 film with Scotsman Sean Connery. 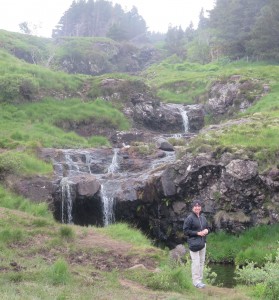 Waterfalls amid meadows. . . the Fairy Pools trail is a lovely Isle of Skye hike.

We stayed in Skye’s biggest town, Portree. With a population of about 2,200. it’s a nice little tourist village that features marvelous photo ops and excellent dining options. Driving on the island can be an adventure if you’re not a fan of narrow little roads. But the other drivers were all courteous, a necessity when cars traveling in opposite directions meet and need one to slip into a “Passing Place’’ to allow the other to get by.

The trip to the Fairy Pools was a nice adventure. When we arrived, the modest car park was nearly bursting with vehicles, It’s a (mostly) gentle walk through a meadow filled with rapids and waterfalls. Be sure to bring bug spray for the voracious “midges’’—Scottish gnats. 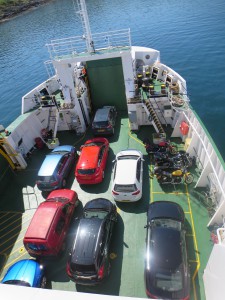 Not hard to find our bright red Focus on the ferry. . .

But you’re here for the golf. And our next round was a special treat. 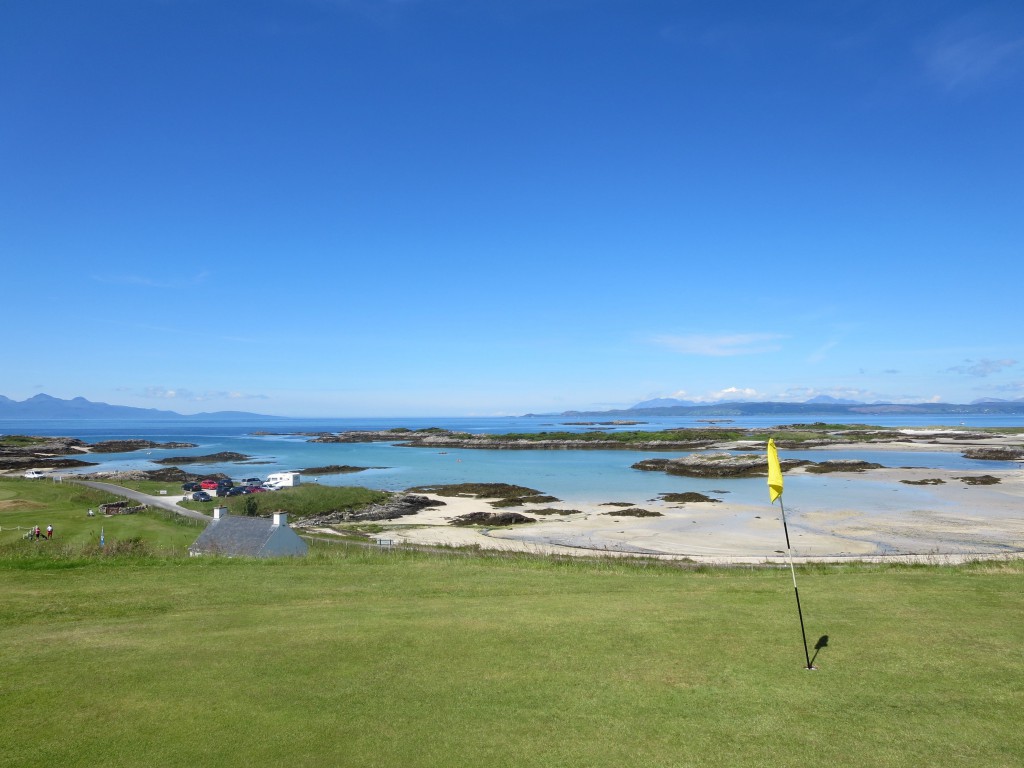 Traigh’s elevated first green, looking seaward. First tee is to the left of the clubhouse rooftop on this uphill par-three.

TRAIGH GOLF COURSE has only nine holes, and is far off the beaten path for golf trips. But it fit in perfectly with our plan to head down the West Coast from Isle of Skye to Machrihanish, another out-of-the-way mecca.

And if you detour to Traigh, you will not be disappointed.

We enjoyed a gorgeous sunny day on the ferry across the Sound of Sleat from Isle of Skye on the Armadale-Mallaig ferry, an easy half-hour boat ride. From there, it was a quick six-mile trip to Traigh through a beautiful but narrow road back to the sea.

As we pulled up, our jaws dropped. On our right was a magnificent ever-changing beach where the tide seemingly rolled in and out forever between rocky fingers amid white sand.

On our left, the golf course rose and fell on enchantingly hilly terrain. We knew that the fairways and greens were somehow connected, but which one fairway led to which green was immediately apparent.

The small car park, which held room for 10 or 12 cars, was understandably filled on this magnificent day. But Liz managed to pull our little Red Focus off the road by negotiating a gully without damaging the bottom of the car.

As soon as we got out, a friendly man who had just finished his round introduced himself and we chatted a while. Then a couple more golfers who had finished up came over to say hello, including club captain Roddie Burgess.

Each of them gave us a detailed explanation of how each tee was connected to its fairway and green, and where to find the next tee. We also talked about any number of other things. Where we were from—Chicago. How we found Traigh—I don’t remember exactly but I’m thinking it was an internet search of nine-hole courses in Scotland. What brought them to Traigh—summer homes or full-time residence.

“I just came up for the weekend. Thirty years ago,’’ one of our new friends said, breaking into a broad smile.

We also talked to Pat Fowler, a local artist who was taking advantage of a perfect day to do some painting near the car park before she got out her golf clubs.

This was all very interesting, but I was getting anxious to tee it up on this beautiful and quirky nine-holer. With a Pebble Beach view on one side, and a mountain view on the other, what’s not to like? Even the greens fee of 20 Pounds was inviting.

By the time we visited the pro shop, and received a few more course tips from the friendliest locals you can imagine, we arrived on the first tee with quite the adrenalin rush.

That’s fine for the Super Bowl, but not Traigh’s first hole, which is 130 yards straight up over a gorse-filled slope. How long would it play? 150 yards? More? Less?

Didn’t matter. With the warp speed of our first swings, Liz and I needed to reload quickly. Wising up, I hit a little iron to the short grass right of the green, where the ball could be found and struck again. Liz also followed that route and we were off.

The view from the No. 1 green was breathtaking. From where we’d walked up, you could see the glorious beach and the islands to the west. Behind us was a hilly range of peaks. (Don’t mind my video about being on the Kintyre Peninsula. We were on the West Coast of Scotland, but were still quite a ways from an upcoming destination, the Kintyre Peninsula, home to fabled Machrihanish.) 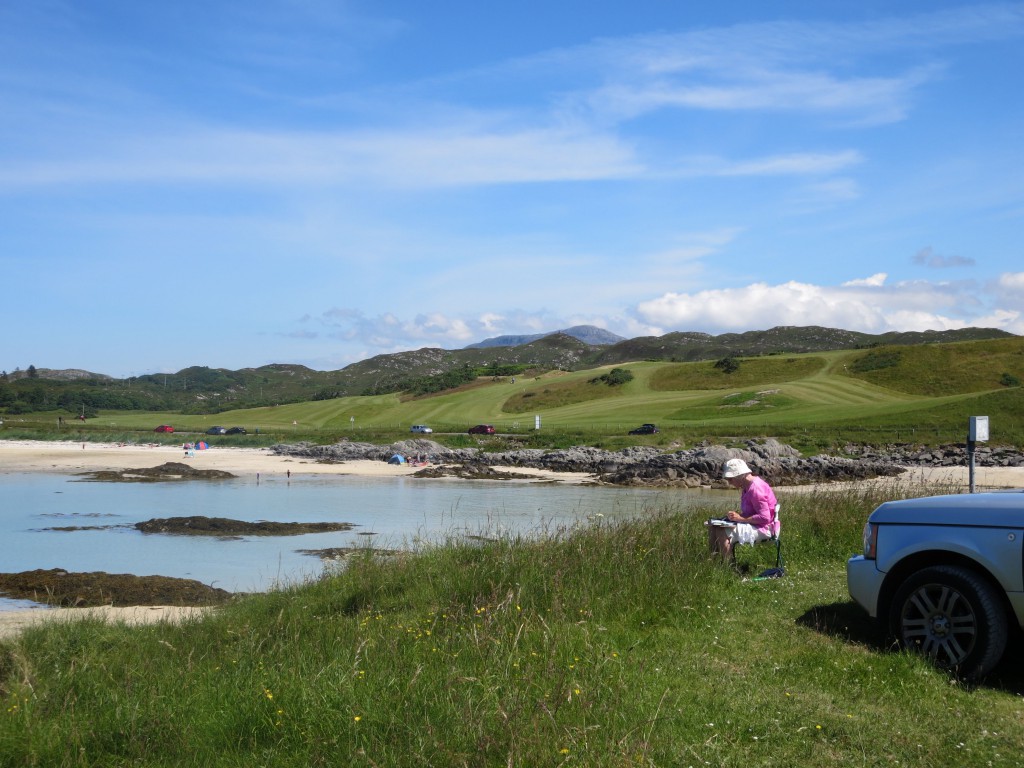 A little painting before taking to the Traigh links.

And we walked to our next tee, we could see portions of the sprawling second hole, a split-fairway challenge. What we could not see was any indication of the green.

At my suggestion, Liz chose the left fairway, which was wide and inviting and a downhill shot. I opted go for the right fairway, a forced carry of nearly 200 yards over a gorse-filled valley.

Using my adrenaline properly, I landed a ball on the hilltop fairway. After walking around the trouble-filled valley, I headed up the hill to my ball and told Liz I would see her at the green.

That, of course, assumed we could locate the No. 2 green. Seeing a marker up above the right side of the fairway, I aimed in that general direction with a middle iron to set up a third shot. As it turned out, I could have hit more. 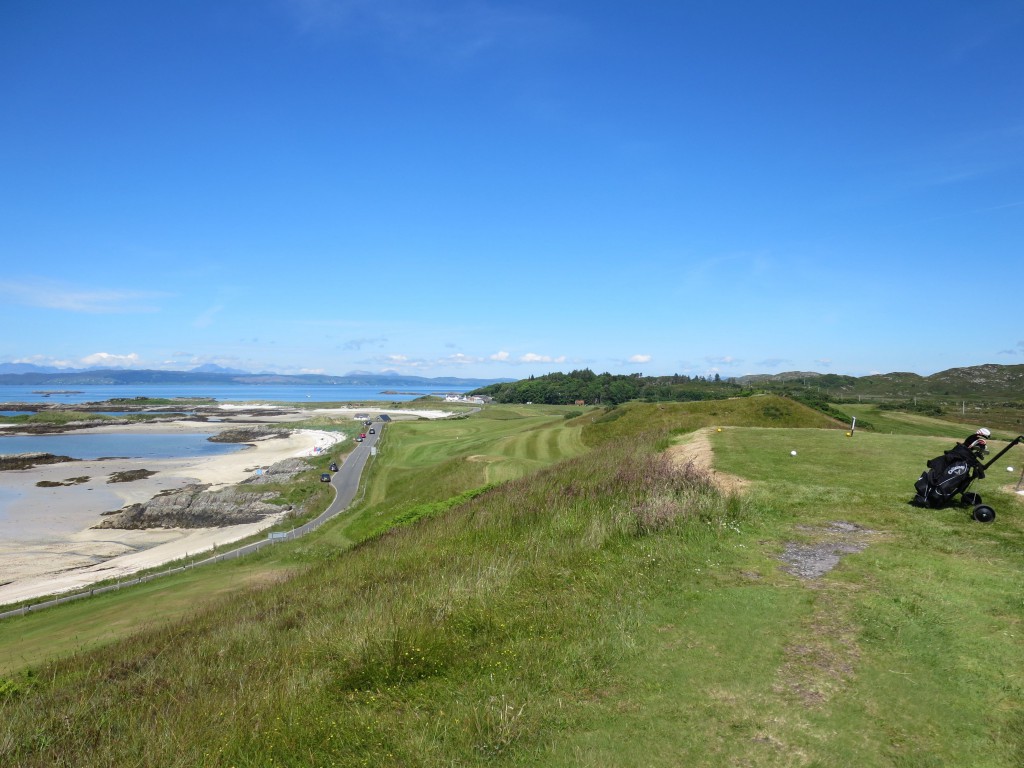 The par-5 second hole offers split fairway options–low and wide to the left, forced carry to the perilous but more direct right fairway.

There, below the marker was a sunken green, which I finally saw by walking up a bit. Liz’s left-fairway route was not at all bad. The shot to the green was delicate from there, but it was from the right, too.

I flipped a wedge down into the hill and took my tap-in par. If I played there again, I would have hit the second shot farther to set up a little chip down to the green, but no big deal. The main lesson is, you really ought to play Traigh more than once–which is true about so many Scottish courses.

Still pumped up, I proceeded to put my tee shots over the third and fifth greens, a pair of par threes that look out to the sea. The third is a 173-yard downhiller toward the sea and generally plays into the wind. The fifth is a 135-yarder over a stream.

Sandwiched between these bogeys, at least, was a par on the 257-yard fourth hole, which requires an uphill tee shot followed by a little pitch to another sunken green.

A par-34 layout, Traigh features four par-threes, three par-fours and two par-fives. It’s just 2,346 yards from the yellows, but requires a sense of how to adjust for wind and rolling terrain, not to mention the ability to visualize blind shots.

And in every direction, there’s a picture that tells a story. The sea. The beach. The arid hills. The flock of sheep in the pasture grazing obliviously as Liz bombed a drive over the stream and dodged some nasty-looking gorse. 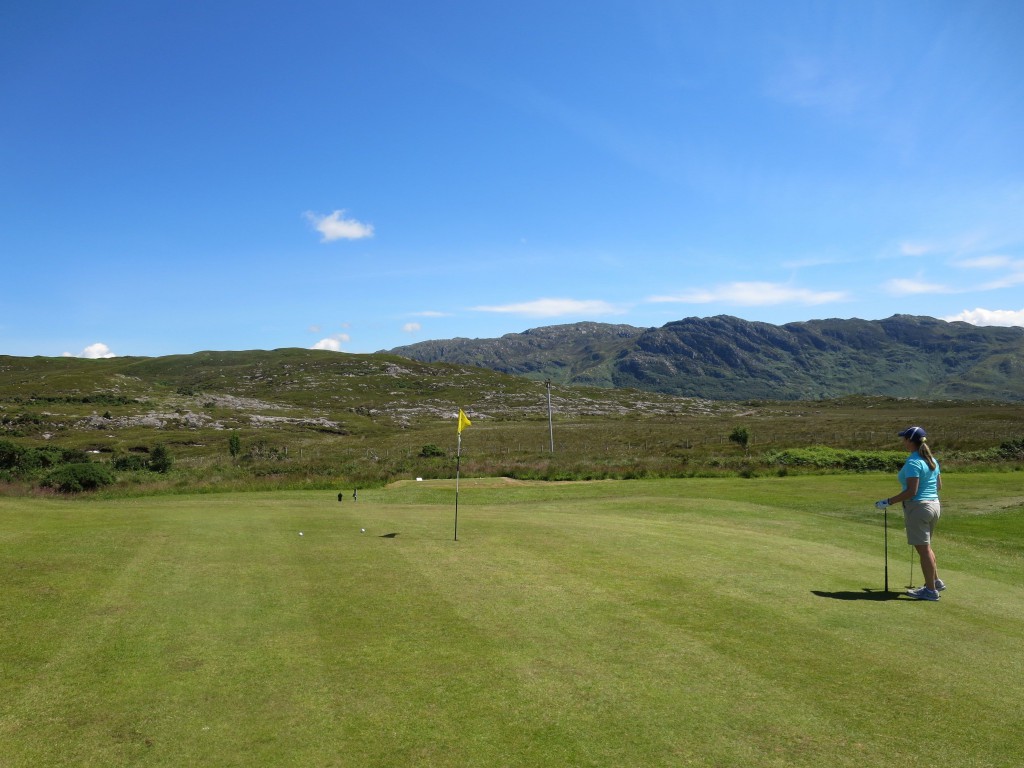 Look away from the sea, and Traigh has a mountain feel.

After all of that up-and-down golf, the seventh hole, a wide-open par-five on the far side of the golf course, was a refreshing change.

The relatively open eighth hole is an up-and-over par-four just over the hilltop. That returns golfers to the grand view of the sea for another downhill par-three, No. 9.

We would have loved to go around Triaigh another time on this beautiful day. But we left reluctantly, and pointed the little red Focus toward Oban, by way of Fort William.

This two-hour drive also proved to be spectacular, with exceptional scenic views as the road rose and fell over tree-lined hills alongside lochs.

Mix in the memories of Traigh, and this was a fine day in Scotland.