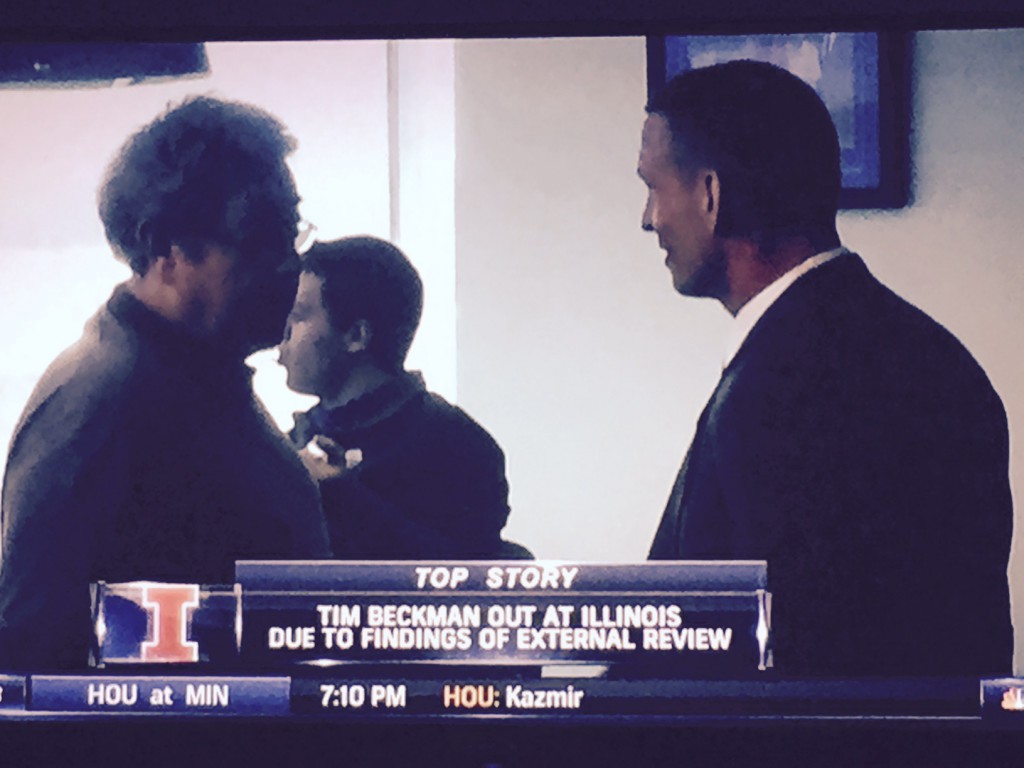 I get facetime with Mike Thomas when my friends at Comcast report on Illinois’ latest athletic controversy, the firing of Tim Beckman. The video is appropriately dark.

On the bright side, firing football coach Tim Beckman will probably be the most popular move Mike Thomas ever makes as Illini athletic director.

It’s a step in the right direction for Illinois, which has been on a seemingly endless downward spiral that is not confined to the athletic department.

Thomas’ seat only gets hotter now. With Beckman gone, the venom will only grow stronger toward an AD who has presided over the demise of the three programs that matter most.

If Court TV opts to televise Beckman’s legal attempt to recover the $3 million he’s lost in wages—that’s a lot of lasagna–there could be a whole new set of Beckman sound bites and B roll. At least recaps of poaching Penn State players, chewing tobacco at Wisconsin, getting bowled over by referees at Northwestern and demanding that the media be more positive will seem amusing in comparison with the claims that he abused and threatened injured players.

Football and women’s basketball are open sores at this point. Those allegation-riddled programs have kept the spotlight off of men’s basketball, which is hitting historic lows in terms of missing the NCAA tournament and being relevant in the Big Ten. John Groce, who looks like a beacon compared to Beckman and women’s coach Matt Bollant, has excuses for not producing. But he’s not in a business where excuses count.

Of course, Thomas is not the person to rebuild Illinois athletics. But if, as seems obvious, he has to go, the question is, who replaces him? And more importantly, who hires Illinois’ next AD?

With the school chancellor departing under an e-mail cloud, and Illinois’ growing track record of bad hires and missteps, it’s not easy to feel optimistic about rebuilding in Champaign.

If whoever’s doing the hiring wants to get it right, I have a short list of AD candidates. I’m not going there now because, despite all the mistakes, I believe Mike Thomas deserves that much. His handling of the three most important programs has been disastrous, but he was thorough and well-prepared on many fronts. The non-revenue programs are flourishing, a major Assembly Hall renovation is under way and the athletic department’s finances seem to be in order—although that’s not hard to do with the checks flowing in from the Big Ten, the Rockefeller family of college sports.

None of that matters, of course. Illinois athletics are deplorable. And all fingers point to Thomas—who, like his coaching hires—has proven he’s in over his head.

Part of the problem, I believe, is that Thomas was under pressure by boosters who write checks to go for home-run hires that were unrealistic. Kevin Sumlin and Shaka Smart were not coming to Champaign.

The problem is, whether Illini Nation wants to believe it or not, Illinois has declined in the pecking order as other schools have become more viable. Some high-profile coaches don’t want to live in Central Illinois; they don’t want to compete against Big Ten schools that have financial and recruiting advantages. And time will tell whether top recruits like what they see in Champaign.

What does Illinois do?

Start thinking outside the box. Coaches like Jerry Kill and Chris Collins, for example, never even rated consideration at Illinois. And so, they’re enjoying success at Minnesota and Northwestern even though their Land of Lincoln connections and expertise would look good in Champaign right now.

Adding to the Illini dilemma are the two disparate constituencies. Chicago alums and Downstate ticket-buyers and alums have very different sensibilities. Add in the pressure for Illinois to break its minority-coach hiring drought, and the problems will be even more daunting for Illinois’ next athletic director.