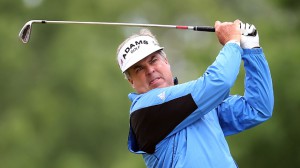 Kenny Perry has been the hot hand at Senior Majors

BENTON HARBOR, Mich.—It was a grinding 1-under 70. But it kept Kenny Perry within five shots of the lead on Thursday in the first round of the Senior PGA at Harbor Shores.

Perry, the resilient Kentuckian who has been a major force in Champions Tour golf the last year, is as curious as anybody to see if he can pull off the remarkable feat of winning a fourth senior major in less than 12 months.

“You never know,’’ said Perry, 53. “When you get to our age, it’s amazing what you feel like when you wake up each morning. Some days I’m stiffer than others, but it was OK [on Thursday]. It was very brisk, but it was a beautiful day to play golf.’’

Perry, who won the Senior Players Championship and U.S. Senior Open last year, added the Tradition, one of five senior majors, at Shoal Creek in Alabama last week. He skipped the 2013 Senior British Open, so his senior majors are consecutive in the North American sense only. But three of the last four is still pretty—well, major.

While he’s not quite in Tiger-slam territory, Perry is still on some high ground.

What Perry has accomplished against players such as Mark Calcavecchia, Bernhard Langer and Fred Couples, who are still competitive when they play PGA Tour events, is pretty good stuff, Jay Haas said.

“[Perry] is clearly one of our best players,’’ said Haas (69), who was four shots behind  Joe Durant, who opened with a 65 on Thursday. “These guys are still very capable. What he’s accomplished in winning three straight majors is pretty impressive.’’

There’s a different feeling in the air this week, especially because of the PGA’s interest in Harbor Shores, which is hosting this event four times in seven years thanks to a major commitment from Whirlpool’s KitchenAid brand.

“Without a doubt,’’ said Brad Faxon (67), who was two shots back. “This is the oldest senior tournament we have. [There’s] the pride the PGA of America puts into this. And I like the story here, about what KitchenAid has done with the whole area of St. Joe’s and Benton Harbor. That means a lot. And you see a lot more people here than we see in all our tournaments.’’

Nobody pretends that senior majors are in the same league with the Masters and the other three traditional majors. But Perry, who knew only heartbreak when he lost playoffs at the 1996 PGA and the 2009 Masters, cherishes this opportunity to at least make senior major history with another over-50 title.

“It means everything,’ he said. “When you kind of give your life to something, it’s nice to be remembered for all the effort you put into it.  If I can somehow win four, have four starts in four consecutive–call it the KP Slam or whatever you want to call it, instead of the Tiger slam–it would be something people would remember me for. I don’t know why I figured it out here in my 50s, why I started playing better in the bigger events. But I’m definitely enjoying my golf at this stage in my life.’’

As an added bonus, a victory this week would give Perry a ticket to the PGA, which returns to Valhalla in Louisville, where Perry is a home-state favorite, for the first time since 1996, when Perry bogeyed the last hole and lost a playoff to Mark Brooks.

“I’ve got a lot of history at Valhalla in my home state of Kentucky,’’ Perry said. “If I can get back there, it would be a great way to say bye to everybody.  It’s kind of my way to retire. That’s my goal.  To try to win this event and make sure I don’t have to put pressure on [PGA president] Ted Bishop to give me a special sponsor’s exemption into the week.  Hopefully, I can win this week and earn my way into Valhalla.’’

That would be a major accomplishment at any age.