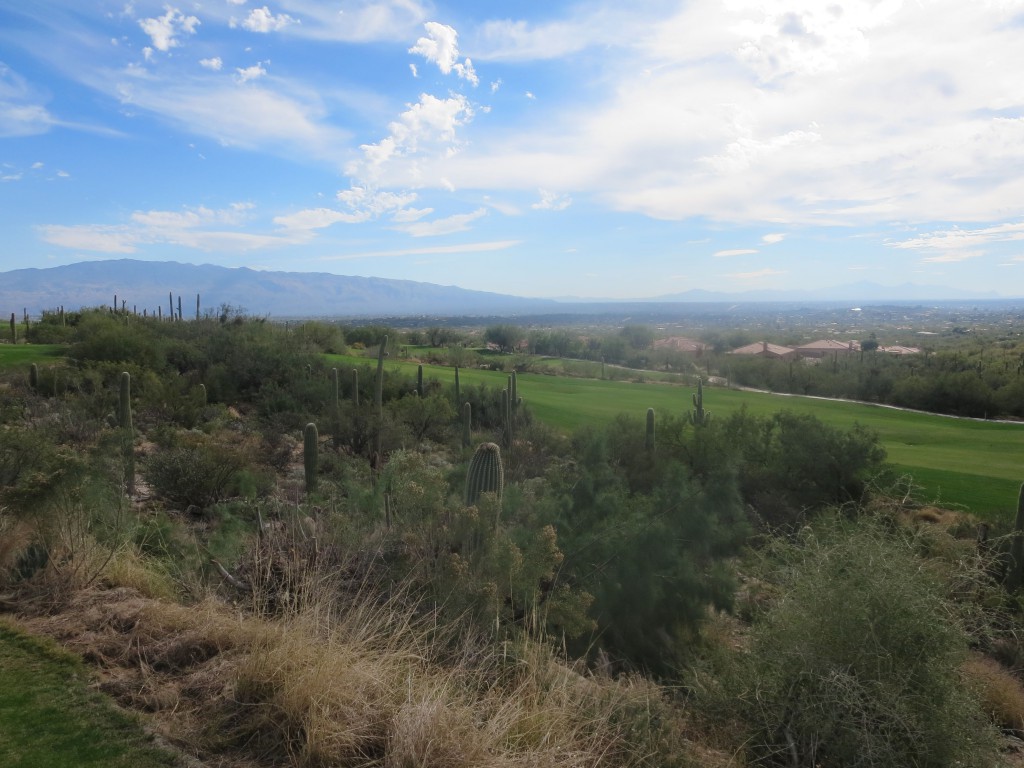 If you’re a golfer, your answers probably go a long way toward explaining whether you like desert golf. Or don’t.

Starkly gorgeous? Or darkly barren? Cast your vote. There’s no right or wrong.

Remarkably green fairways that wend their way through cactus and tumbleweed either sparkle—or look out of place—depending on your point of view.

I’ve always appreciated the serenity and under-stated beauty of the American Southwest. Even lived there for a while. Everything’s so big. Everything seems possible.

One undeniable fact of desert golf is how peaceful it is. When there are no birds chirping, no wind whistling through trees and very definitely no man-made sounds, it’s one of the quietest places on earth. 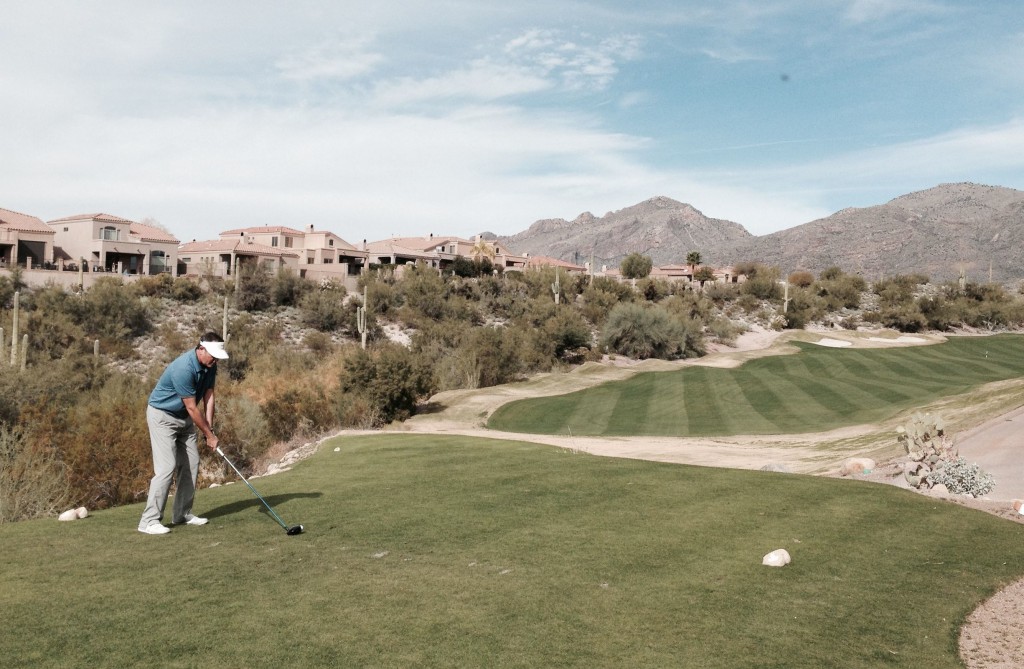 LaPaloma has ample fairways, but it’s best not to stray beyond them.

Navigating a golf ball, though, through a desert course can be a Wild West show.

Many of us discovered that at the Tucson Media Classic, an event that featured three courses that were, in no particular order, either hard, really challenging or very difficult.

The opening round was at La Paloma Country Club, at the Westin La Paloma Resort & Spa. The Ridge/Canyon portion of this 27-hole Nicklaus layout apparently was once famous, or infamous, for being the nation’s toughest resort course, with a 155 slope.

Even so, from the 6,000-yard tees, No. 3 was still a 158-yard all-carry par-three. Choose your tee box wisely, preferably after checking your ego in the nicely appointed clubhouse.

To its credit, La Paloma also has its share of user-friendly holes, including some very fun driveable (for some people) par fours and some manageable par fives.

The course, managed by Troon Golf, is immaculate, and the entire resort is first-rate. Westin completed a $35 million renovation in 2013, and attractive stay-and-play packages are available. 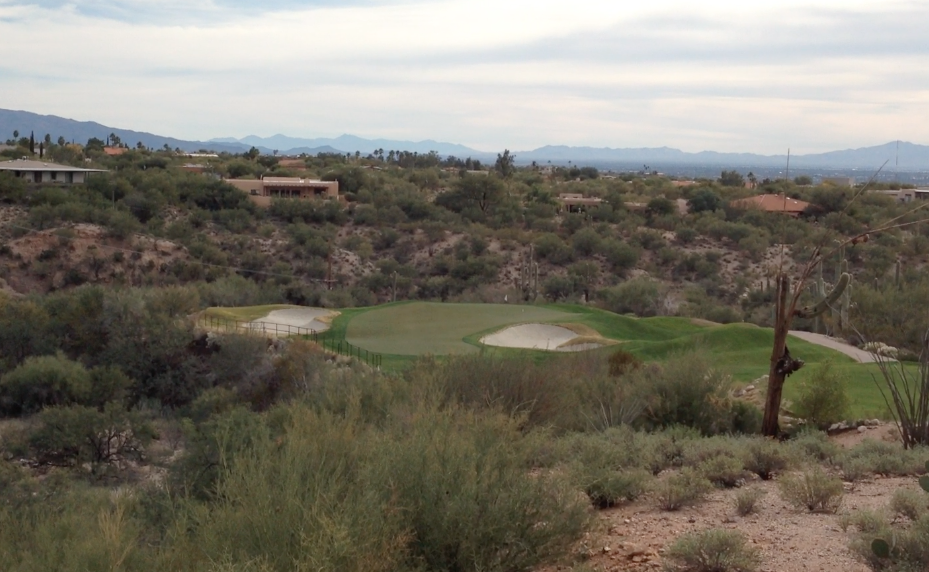 Desert classic: This La Paloma one-shotter gives a good idea of what to expect on a Southwest par three,

The second profile in Tucson courage, Arizona National Golf Club, was equally diabolical and beautiful. Nestled in the foothills of the Santa Catalina Mountains, it has collected a fistful of top-100 designations from national publications. It’s just a big-time experience.

It’s also a daunting test, of course. The par threes at this Robert Trent Jones Jr. layout seemed to consist of tees, greens and no man’s land, where even the roadrunners and jack rabbits tread lightly. I was thrilled to hit two of these greens, and to find the ball on a third. On the fourth, not so good.

Virtually every hole required a tee shot launched over cactus and scrub. For those tenderfoots smart enough to stay on the proper tees, there was a lot of adventurous golf to be played. If you’re not a big hitter, do not turn your nose up at the 5,588-yard white tees. Focus your gaze on the 131 slope from those white tees.

The 10th and 11th holes pack a serious one-two punch. Think Ali-Frazier. No. 10 is an uphill par-four that, even with a good drive, leaves a perilous shot over a forbidding barranca.

“Easily the most difficult hole on the course,’’ the yardage book says.

My partner and I were thrilled to par that hole. We took the practical driver-layup-wedge route, followed by draining an improbable 25-foot putt. In other words, a birdie masquerading as a par. But we were still very pleased.

No. 11, the book noted, “starts with a blind shot that must carry as much as 240 yards to get to the front edge of the fairway.’’ Which is why people need to be on the proper tees.

Having done that, we were able to hit the fairway, or the first cut, which was close enough. A 200-yard second shot left a short iron over yet another scrub-grass-and-cactus gulley in front of the green. Two putts later—bingo!—another par.

On those two holes, your basic bogey golfer felt he belonged on daunting Arizona National. It shall remain a source of pride. 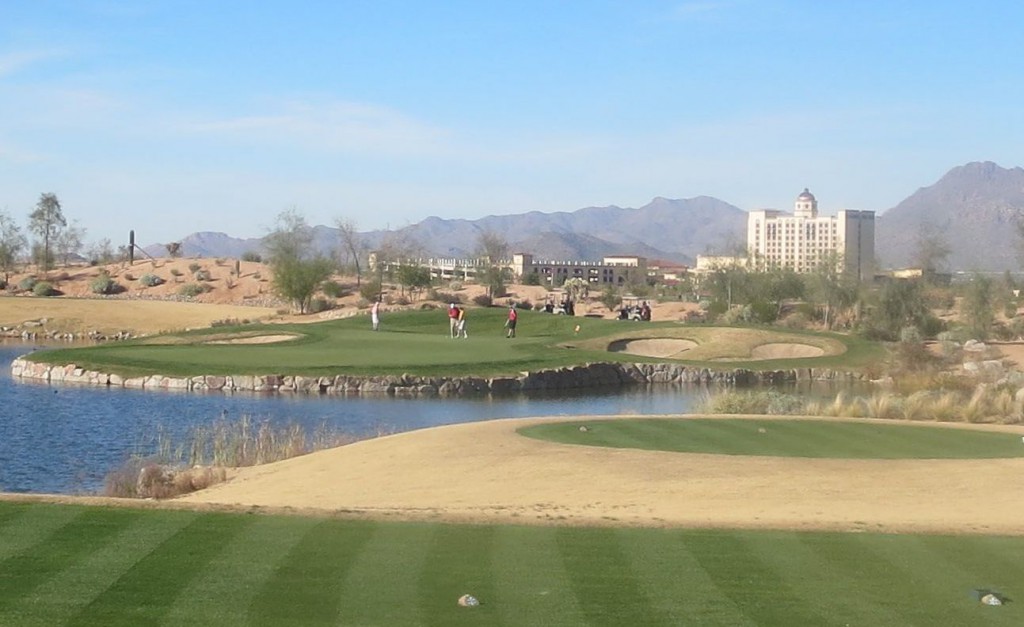 That left only the final frontier, Sewailo Golf Club, which was designed by Notah Begay and Ty Butler. This two-year-old layout, the new home of University of Arizona golf, is attached to the cozy and comfortable Casino Del Sol.

For days, we had looked out at it from our rooms, and I had concluded that Sewailo would be more understanding of frail golf swings. Unlike the previous two courses, Sewailo is on relatively flat ground. And while it has an abundance of desert for those who stray from the fairway, it didn’t seem as tall or as intimidating.

As a very modern layout, it also held the promise of a ball that rolls, which is generally appreciated by aging short-hitters. We know who we are.

This proved to be true. The ball did roll. The problem was, it often rolled into the wrong places. Like strategically placed bunkers. And the water hazards that are a feature on 12 holes.

There was foreshadowing to this round: As we gathered outside the clubhouse, preparing to tee off, a cell phone ringer started playing the Florida State War Chant. . . . on a tribal resort course designed by Notah Begay.

Let’s just leave it at that. 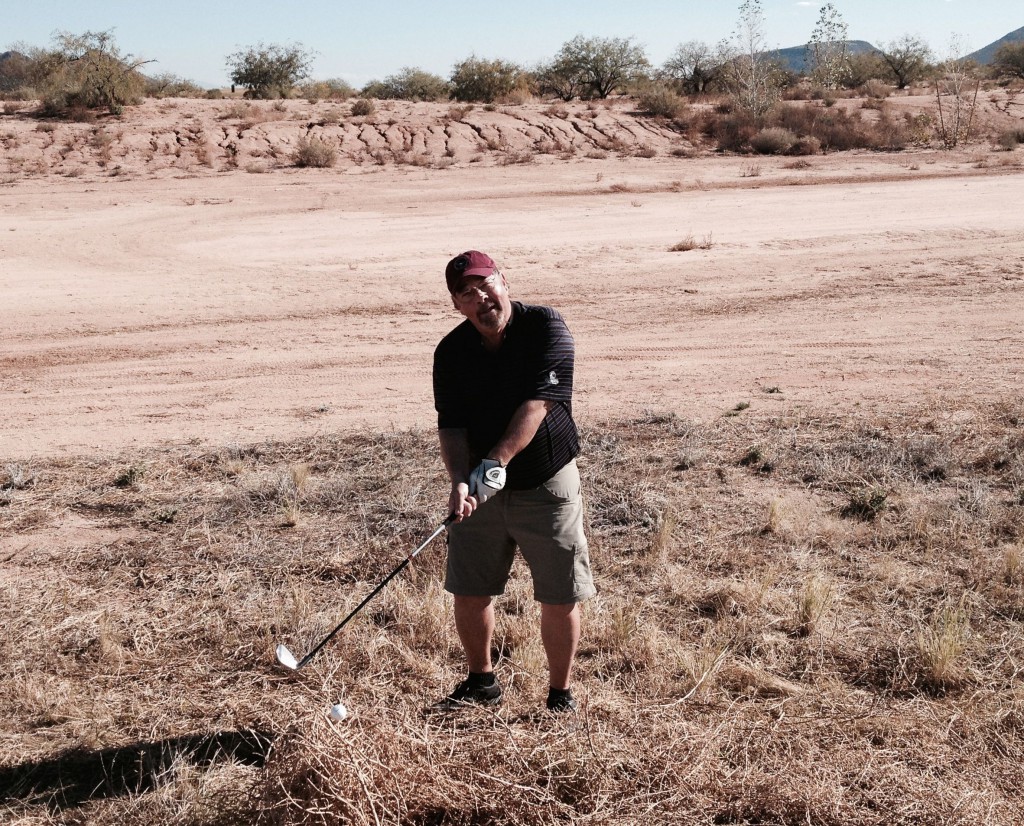 Our misadventures started on the 10th tee, where our round began. It’s the No. 1 handicap hole—for many reasons.

No. 10 is a dogleg right around a pond. Well-struck drives can easily go through the fairway into huge, deep bunkers. Playing out of them is confounded by a gulley that bisects the fairway. Anything that’s on the right side off the tee is likely to roll off the slick fariway and down the dormant rough into the pond. The green, which is tucked left, is no bargain, either. And the 10th hole plays 550 yards—from the 5,861 yard-tees.

Other than that, how did you enjoy the play, Mrs. Lincoln?

An angry swing off the 11th tee found a little fairway bunker—really, the only fairway bunker on that hole. The pitchout caught the right side of the fairway and bounded into a stony wash. That’s on me. But what’s with all the drainage in southern Arizona?

On No. 12, I missed the fairway left and my ball came to a stop nestled in some tumbleweed—two feet off the ground. My bad. It was a generous fairway. At least it provided a good photo-op. 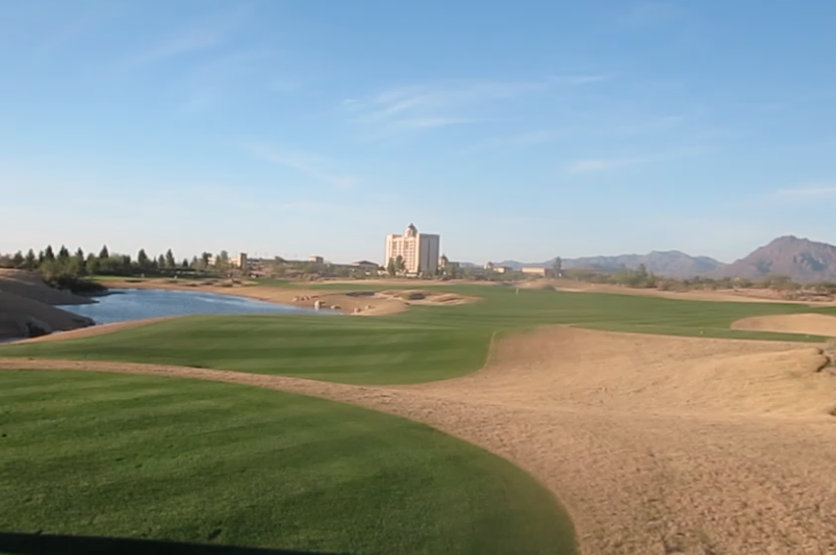 At Sawailo, another par-4 dogleg hugs a lake.

That said, Sewailo seemed like it could be really fun and exhilarating with a precise swing and course knowledge—and an understanding that there’s no stopping the 10th hole. You can only try to contain it.

The first few holes are sassy, but short enough to allow ambitious golfers to be careful out there.

To sum up, desert golf can be a tad Dickensian. It darts between the best of times and the worst of times, with the margin between those states of mind often measured in feet, not yards.

There are so many pluses and minuses to target golf among the cactus. The weather is uniformly outstanding. Bring plenty of sunscreen and golf balls. And bring enough perspective to know that there are just places on desert courses that have the bite of a rattlesnake.

But that only makes moments when you bite back that much more enjoyable. I shall always savor playing the Sewailo par-threes in 1-over.

And I’d really like another shot at that ball that landed in the tumbleweed two feet off the ground.

One Response to “Tucson golf: Calm amid the cactus”