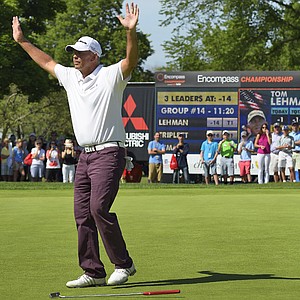 If you’ve been meaning to get out and watch your favorite senior golfers when they return to Chicago this summer, don’t dawdle.

There’s a lot of change in the wind for the Encompass Championship after the Champions Tour makes its third stop at North Shore Country Club in Glenview on July 10-12.

Encompass Insurance is dropping out as title sponsor. And due to renovation plans, North Shore will not continue to host the tournament, sources said.

“If a new title sponsor can be lined up, the golf course thing would be pretty easy,’’ one source said. In the north suburbs, the Glen Club, which hosted Web.com tournaments, would be a good fit. Chicago Highlands, a relatively new private club in west suburban Westchester, is another possibility. A number of  north suburban clubs also would be interested.

The setbacks are disappointing, though, on several levels. The first two Encompass events, which were won by Craig Stadler and Tom Lehman, were encouraging. The tournament attracted solid galleries who were rewarded with competitive golf from some of the biggest names in senior golf.

“It’s simply a sensational golf course,’’ Lehman said Monday. “Everybody who plays here loves it. It’s in great condition. It’s a great test. You have to do everything well. That’s the mark of a great golf course. And we always get a good crowd out here, which makes it fun.’’

With the Western Golf Association expected to continue to bring the BMW Championship to Chicago only once every two years, the uncertainty surrounding the Champions tour means Chicago again could be without an annual professional golf event.

With all of the competition for its sports-entertainment dollars, Chicago does not have a great track record for sponsoring golf tournaments. A couple of other Champions tour events were abandoned here previously, the LPGA has never been able to gain a foothold. And even the old Western Open underwent many sponsorship changes.

The unfortunate part is that the Champions tour not only put on two good tournaments—Stadler and Lehman both won on the final hole. The senior players enjoyed interacting with their galleries. And North Shore, which hosted the 1933 U.S. Open, is an attractive traditional layout that tested the golfers  while allowing spectators great vantage points for viewing.

This year’s Encompass will feature another good field.

The pro-am portion of the event also is expected to have an interesting field, including Brian Urlacher, Jermaine Dye, Johnny Bench, Mike Eruzione, Roger Clemens and Jeremy Roenick.