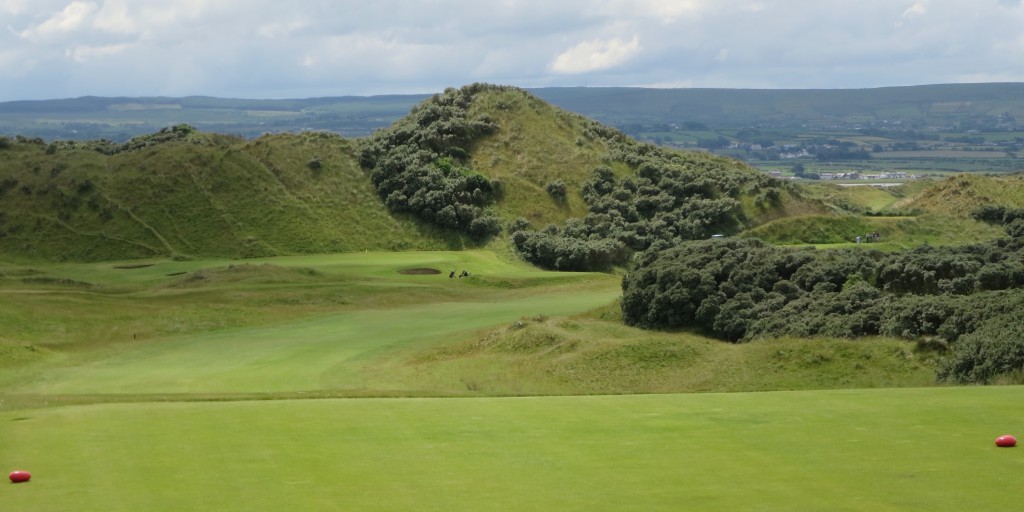 Majestic first hole at Portstewart bends around to the right.

It’s easy to see why the first hole at Portstewart is arguably the best opening hole in Ireland.

From its high-perched tee, it seems to spiral downward forever. It’s an inviting shot from an inviting vista that shows the sea to the right, the eighth green beyond the first fairway and a dunes-laden golf course sprawling all around it.

Although the green is unseen on this dogleg right, tucked behind the hills, No. 1 at Portstewart is an exhilarating way to begin a round. 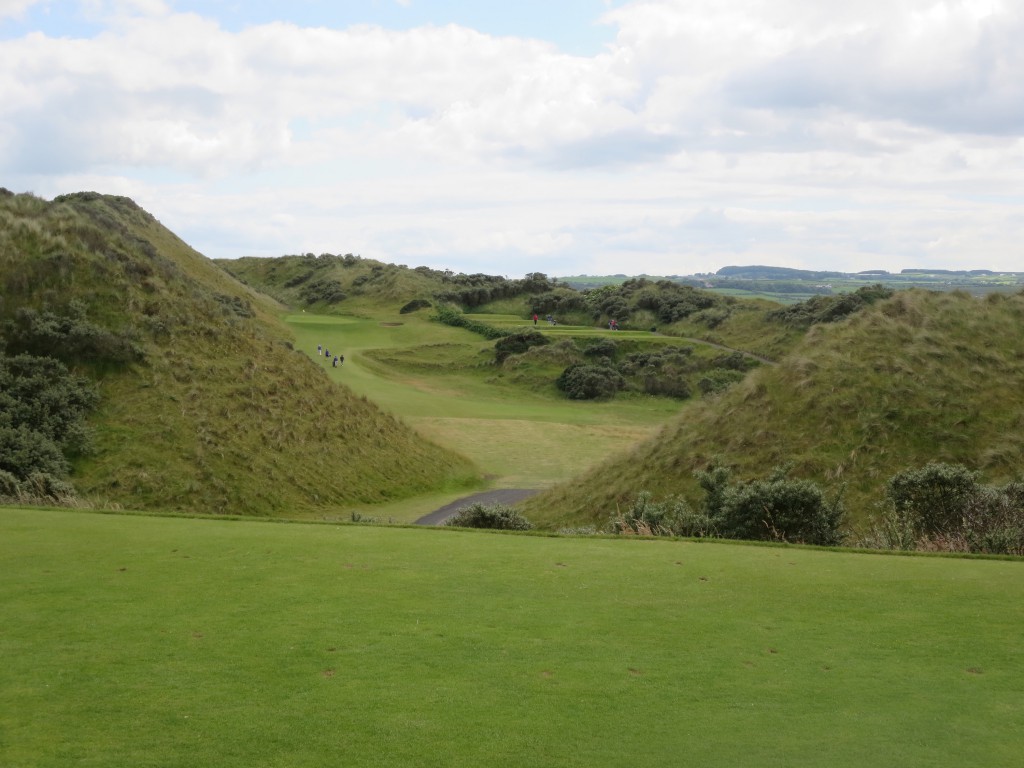 No. 2 at Portstewart, named Devil’s Hill, is a thread-the-needle.

Reality sets in on the second hole, which was carved out after a 1980s land purchase that allowed major front-nine alterations to a course that opened in 1908 and has undergone several makeovers, including one by noted designer Willie Park in the 1920s.

The second hole plays longer than its 360 yards. It requires a rope of a tee shot between two dunes to set up a tricky uphill approach to a green that towers above the fairway.

A look at Portstewart’s celebrated opening hole and beyond, courtesy of the club’s website.

When the wind is blowing—and it often is–on the third hole, this 200-yard par-3 provides yet another early challenge. Anything right can wind up in deep fescue. Anything left leaves a tricky up-and-down chipshot. Short and long are no bargains, either.

And by the time we got to the fourth tee, a little sprinkle of rain added to the drama.

Fortunately, from my point of view, the Strand course backed off a bit at that point. The flagship of the three 18-holers at Portstewart, the Strand course goes on to be a fun and scenic layout that provides plenty of tests, but also gives golfers opportunities. 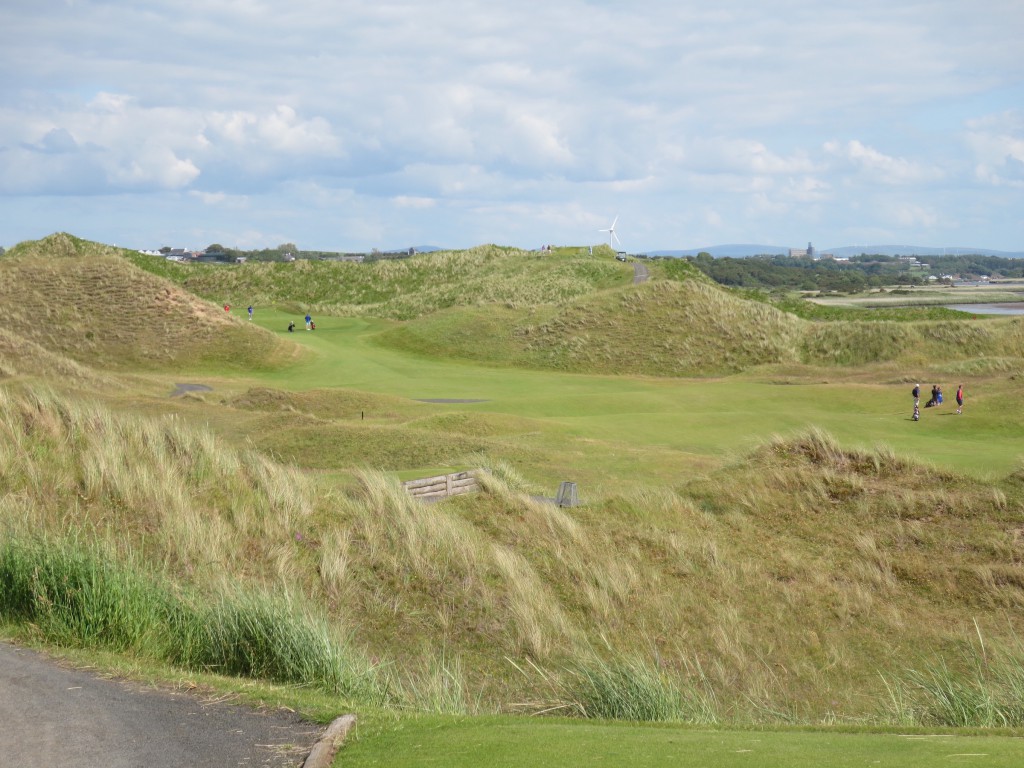 A tight but beautiful approach at Portstewart.

The fifth hole starts with another high-perched tee. Allow extra time up there with your camera for views of the River Bann. The landing area is huge, and the tight approach to the green is challenging, but very reasonable for a No. 1 handicap hole.

From there, Portstewart proceeds through a series of holes that make for an entertaining journey through its rolling terrain.

Our biggest setback was that we happened upon Portstewart on a Saturday. There was a club competition going on that morning, and the pace of play bogged down.

Teeing off at 3 p.m., we wound up enduring a five-hour round, which is rare in Ireland or Scotland.

On the other hand, we caught only a few sprinkles, and were glad to be warm and dry in the morning while the locals were playing their event wearing “water-proofs,’’ as they refer to their rainsuits. 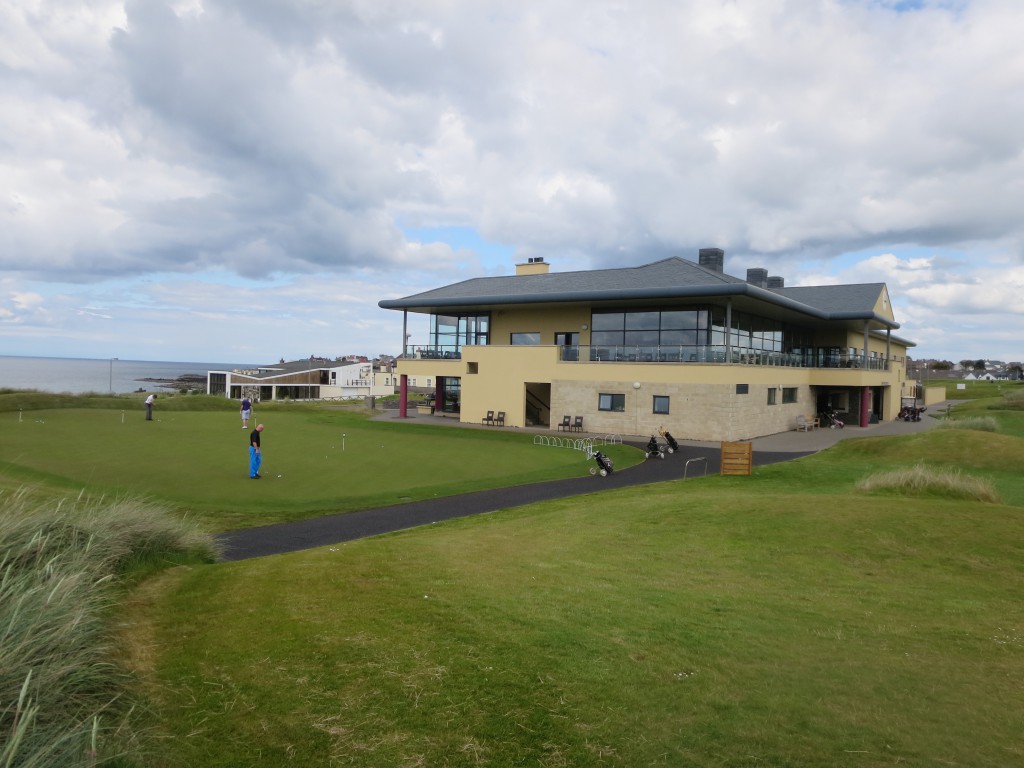 By the time we finished, the clubhouse was bustling with a couple of gala events, so we headed back into Portstewart for a bite to eat and a pint of Guinness.

Portstewart, which has been a popular summer resort since the 1800s, also was bustling on Saturday night, so we returned for the second straight night to the Anchor Bar, where we had enjoyed good food and drink amid friendly staff and other patrons the previous night. 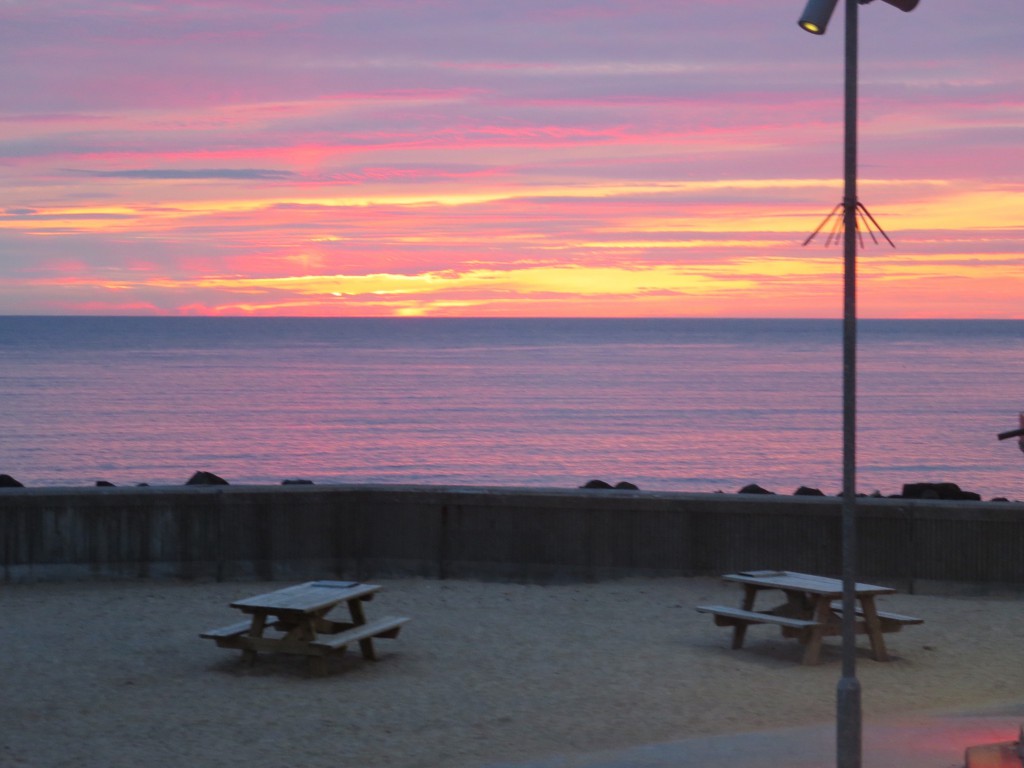 Portstewart sunset. . .inspiration for `Red Sails in the Sunset.’

The Anchor was on the other side of Portstewart’s celebrated Promenade, a perfect walk in which to watch another glorious sunset. Sundown in Portstewart was the inspiration for the song, “Red Sails in the Sunset,’’ written by Jimmy Kennedy, who grew up in town.

The Anchor Bar is a popular Portstewart gathering place outside. . . 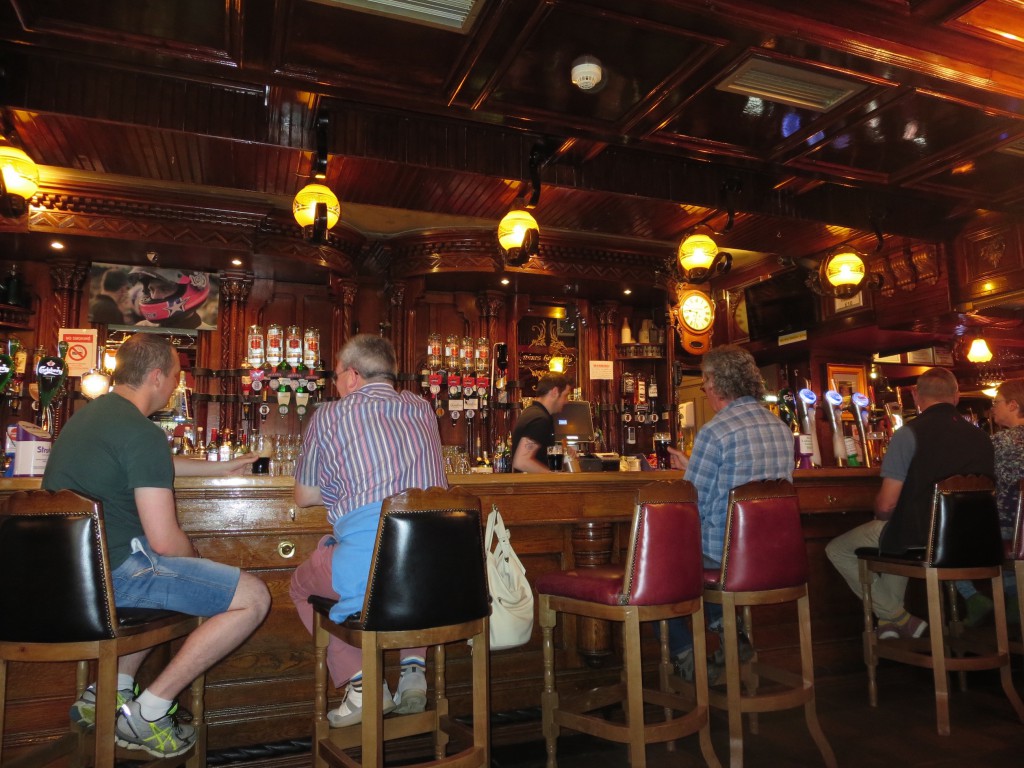 The previous night, we had seen local youngsters diving off a rock at one end of the Promenade into the sea. The temperature wasn’t what Americans would consider beach weather, but the hardy lads seemed to be enjoying themselves.

There’s an amazing amount of golf in the Portstewart-Portrush area. Beyond the three courses at Portstewart, Royal Portrush has a second course that’s top-notch. Nearby Castlerock has a highly regarded 18, and a nine-holer that’s also supposed to be outstanding. And Ballycastle also is an enticing seaside links.

So many golf courses. So little time. But that’s all the more reason why we hope to return someday. 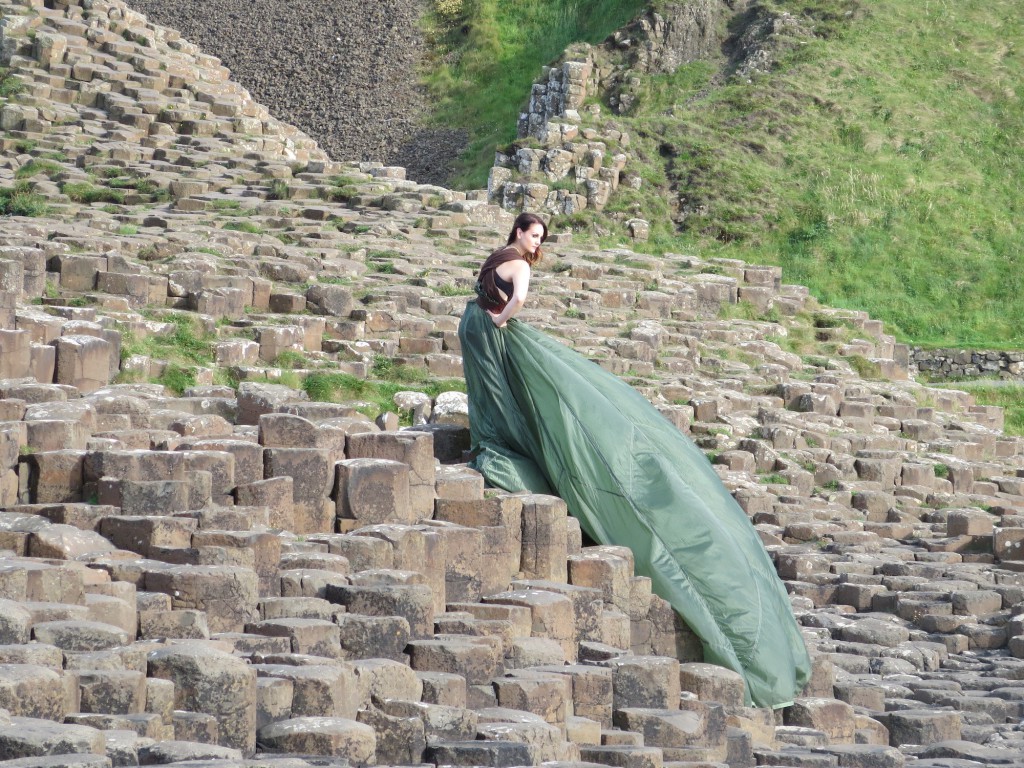 A photo shoot at Giant’s Causeway.

We did catch a pair of popular tourist attractions. At the Bushmill’s distillery, we sampled some fine Irish whisky. At the Giant’s Causeway, we enjoyed one of the Emerald Isle’s most boggling natural wonders.

The Causeway draws its name from the legend that an Irish giant, Finn MacCool, built a causeway across the North Channel to do battle with a Scottish giant. Geologists say the 40,000 interlocking basalt pieces are the product of an ancient volcano. 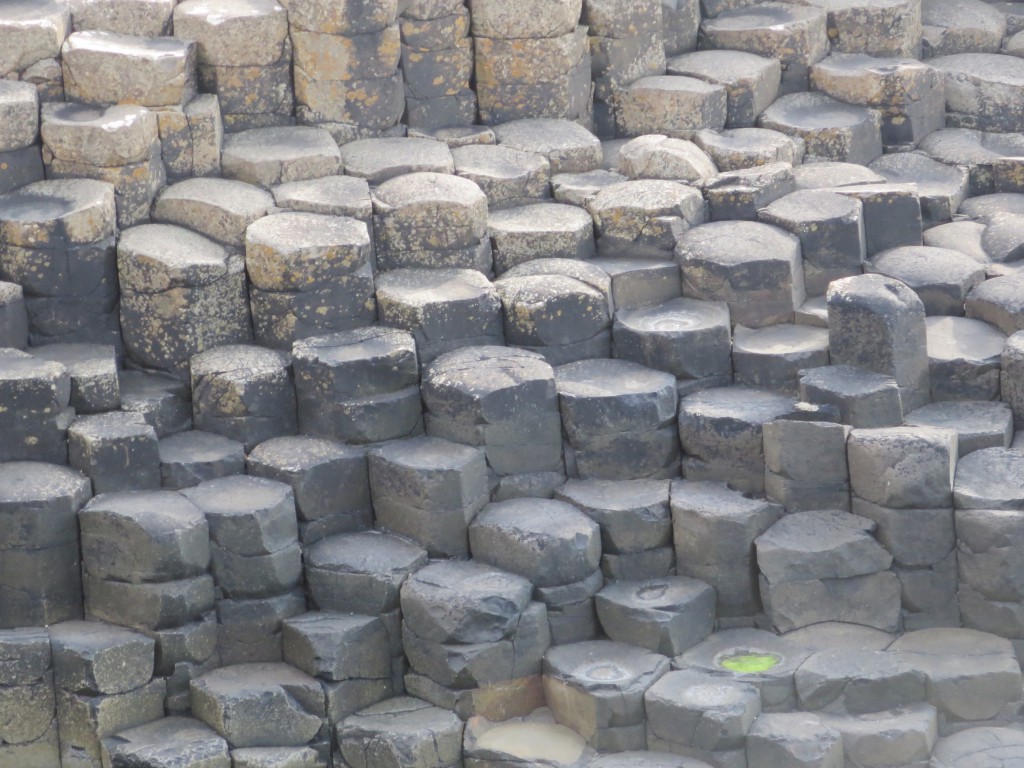 Giant’s Causeway: How did those stones get there, a volcanic eruption or an Irish giant’s handiwork?

These uniquely fitting stones are fascinating. And visitors are allowed to roam around on them, to take photos of the geometric stones and ponder how they were formed.

With so many outdoors activities to choose from, it’s easy to see why the irish as well as international visitors flock to the north coast of Northern Ireland.

We also enjoyed our visit while staying at the Cul-Erg B&B, and were pleased to share a pint with the proprietors, J.J. and Marie, who are top-notch innkeepers.

We went to the Portstewart-Portrush area for golf. We left with memories of a much wider variety.

One Response to “Portstewart: A rolling and scenic Northern Ireland beauty”