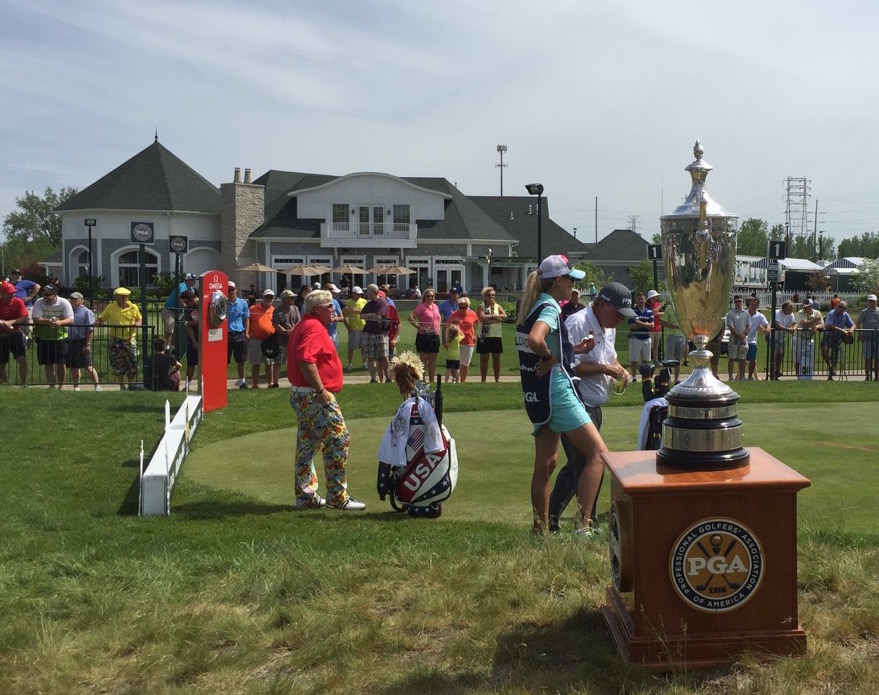 John Daly attracted the biggest galleries at the Senior PGA on Thursday despite a tough scoring day.

BENTON HARBOR, Mich.—John Daly didn’t want to talk about it.

After a disappointing 4-over-par 75 left him tied for 126th after the first round of the Senior PGA, the long-hitting free spirit dropped off his frustrating scorecard and made a quick exit.

That was understandable. It was a familiar rendition of the Daly Show—another day when he gambled and lost.

“He had a couple of tough holes,’’ said playing partner Bernhard Langer, who shot a 2-under 69. “That’s his game. He goes for broke on many drives. Sometimes he pulls it off and makes a bunch of birdies and eagles. He got very unfortunate with a couple of bad breaks that cost him dearly.’’

Daly faces an uphill climb merely to make the cut. Rocco Mediate, who famously lost a U.S. Open playoff to Tiger Woods, leads the field after shooting  a Senior PGA-record 9-under 62.

“It was one of those days,’’ Mediate said. “I just drove it well. I hit a lot of solid irons. It’s been a while. Stuff I’m working on is coming around. I’m just trying to get back to what I used to do—and that’s hit the ball in the middle of the face. It’s been a few years since that happened. So it was a lot of fun.’’

With 43 players shooting 2-under 69s or better on a day when Harbor Shores was receptive to players going low, a 75 is not going to cut it. 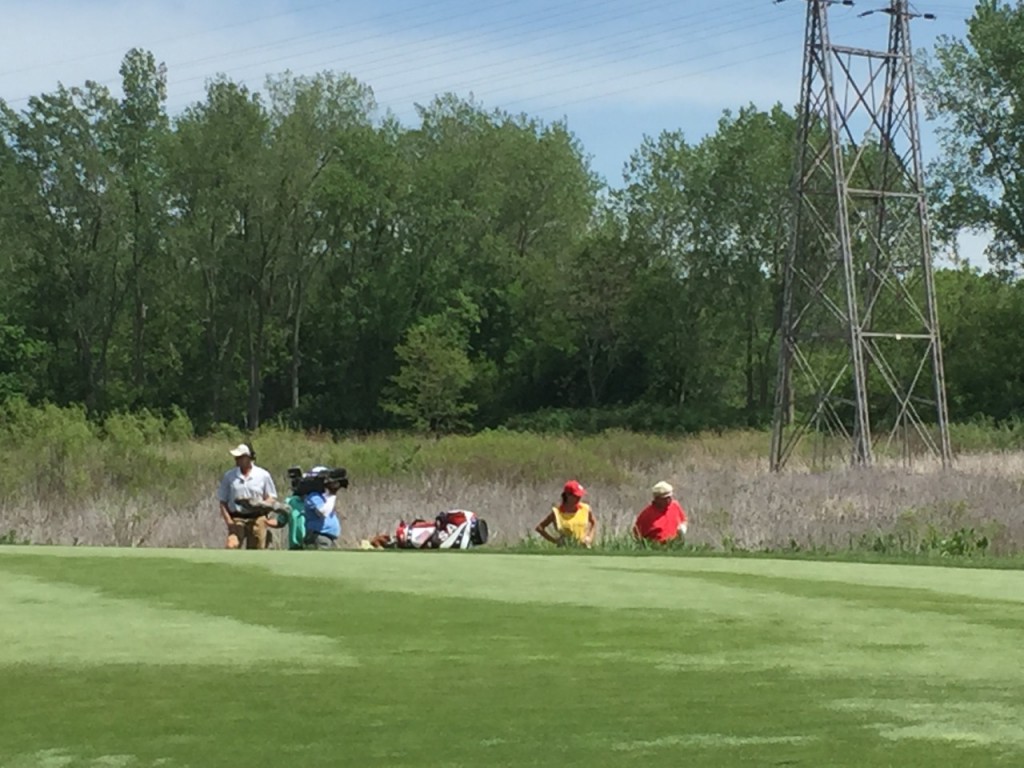 Daly did lead the field with the biggest gallery. That pumped up concessions sales as well as Langer.

“It’s always fun to have a large gallery, to have people excited about the game,’’ the three-time Schwab Cup winner said. “This is a tough golf course to walk. It was great to see a whole bunch of people walking with us.’’

What they saw was the steady play of Langer, who wasn’t at his best but kept himself in the hunt.

They also saw the often-puzzling ups and downs of Daly. who opted not to go for the green on the par-5 15th hole (his sixth hole of the day) and made bogey when his third shot skidded past the hole, leaving a difficult putt from the fringe, followed by a mis-hit or mis-read that meant 6.

Even more curious, after not going for it on the par-5, Daly pulled out driver on the par-4 16th. While Langer, who hit hybrid off the tee, and Mark Calcavecchia were giving themselves birdie looks by playing around a massive marsh, Daly tried to carry the swamp, which still would not have put him on the green.

His first drive was claimed by the marsh. His second drive also was in the hazard, but playable. His first swipe did not get out of the hazard, though, and another attempt resulted in his second lost-marsh ball.

When he finally pitched disgustedly to the back of the green, he was lying 7. From there, he two-putted for 9—and went from even par to 5-over. 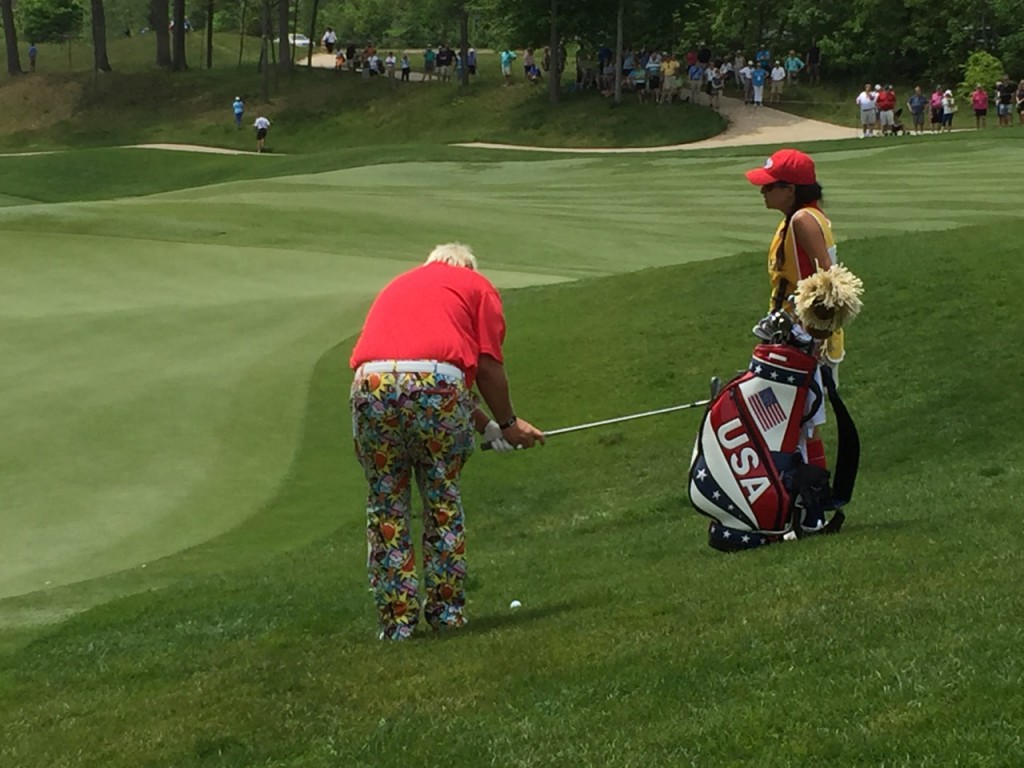 Over the green in two on the par-5 10th, Daly faces tough downhill chip. He left first effort short of green, but scrambled for par.

Daly got back to 2-over with birdies on No. 1, 2 and 5 that were tantalizingly routine. But he double-bogeyed the sixth hole and bogeyed the par-five 9th to end up at 4-over par for the day.

It’s no wonder he stormed out of the scoring office and into his SUV.

“He’s exciting to watch,’’ Langer said. “There’s always something going on. He just had a couple of bad holes today. If he can avoid that, he can go really low.’’

Daly will need to do that on Friday if he wants to play on the weekend at this Senior PGA.