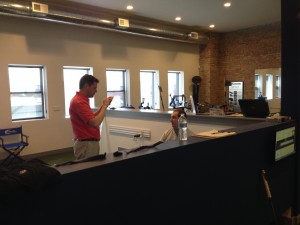 Now it’s a routine that needs to be repeated.

It has been just about a month since I made my first diagnostic visit to Catalyst in search of a better golf swing.

I came in with poor mechanics and no clue about what to do. I’ve always known I had poor mechanics, but until now, I’ve usually had some vague misguided thoughts about how to fix them—even if they were wrong.

Now I know what I need to do, and what the realistic goals are.

My instructor, Joe Sheren, and trainer, Tommy Asuma, have developed some good drills. These “speed sets’’ are a combination of a golf swing and a sweat-inducing workout.

The sets include baseball-style swings, righthanded and lefthanded, with a pitching wedge, on my knees, followed by turning my shoulders as far back as I can go several times, on each side.

Then I repeat the whole sequence with a 6-iron, and repeat it again with just the shaft, by holding the clubhead near my hands.

Then I repeat all of that on my knees.

When I’m at the gym, Tommy and/or Joe are barking, “Faster!’’ When I’m at home, I try not to break anything.

I also am continuing the lower-body flexibility, strength and balance regimen.

Finally, we’ve modified my grip—basically taking the right pinky out of its Vardon overlap and putting it on the club. This allows me to hinge better and swing harder.

This has added up to a 10 to 15 mph increase in clubhead speed since I first started. I’m still only in the mid-80s on a good swing, but it’s a start. I not only never generated good clubhead speed; I was usually afraid to try because of fears that the ball would spray all over the place.

What I have learned from Joe is that I need to work the angles—and how to work the angles. If I can get my clubhead in a good place, I can position myself to swing the club harder and still know where the ball is going.

The fact that I am hitting the ball with more clubhead speed—and still hitting it pretty straight—is a mixed blessing.

Joe encourages me to swing more recklessly at this point, to see where the speed and distance can be pushed, even if the ball doesn’t go straight.

I remember the advice in the famous Ben Hogan book that preached that young players should learn how to hit it far when they take up the game because it’s easier to teach hitting it straight than teaching hitting it far.

The problem is, I never really absorbed it. I never knew how to do that. And the strategist in me always wanted to know where the ball was going to go.

What I am learning now, though, is something I’ve always suspected: A little bit of a hip turn, combined with good clubhead position, can go a long way toward hitting the ball a long way.

“You’ve been hitting it with your arms, and we don’t want to take that away,’’ Joe says. “You need to get everything you can out of your arms.’’

Because of my age and physical limitations, I need to improve my clubhead position and my hip turn. My open clubface has been a serious roadblock to distance. So has my lack of a hip turn.

The open clubface is the product of years of wrong thinking and wrong swinging. I now am learning to trust that an awkward-feeling club position means a good club position—and as I get used to it, it doesn’t feel as awkward.

The lack of a hip turn is especially ironic: Even though I basically am all arms when I swing a golf club, my legs are the strongest part of my body. I used to be able to ride a bike all day, and ski the bumps until my friends had had enough, and I’m still OK at doing those things from a leg standpoint.

So why am I so lame at incorporating legs into my golf swing? Probably for the same reason that I was mainly a contact hitter in baseball/softball.

I don’t get to my legs. We’re going to fix that in golf.

A few weeks in, the quest for a better swing is not a mystery. It’s about exertion and repetition.

NOTE: This is the seventh in a series on trying to improve a golf swing that’s become problematic—and developing more flexibility, balance and general fitness along the way. The whole series can be found at  http://theaposition.com/herbgould/golf/instruction