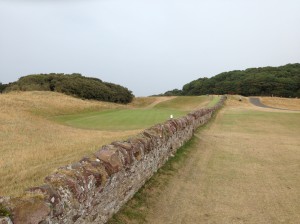 Carry the stonewall that guards the 13th green at North Berwick’s West Links–or scuff your ball.

NORTH BERWICK, Scotland—Although we stayed just one block from the West Links for a week, we didn’t play the course until our final day in North Berwick.

Because we were mainly there to watch the British Open, the bucket-list item that  I was covering for the Chicago Sun-Times, I had only booked a tee time for the Monday after the Open. And with the Open only four miles away, there would be no walking on at this course.

“If I had to choose my favorite course in Scotland,’’ Allan McAllister Ferguson has written, “a course to play day in and ay out—it would be the West Links at North Berwick.’’ Ferguson ought to know. He’s the Rick Steves of Scotland, and someone you should know if you’re planning a trip there. His `Golf in Scotland’ is indispensable.

I would amend his comment by saying, “If I had to choose two golf courses to play day in and day out in one quaint little town, they would be the West Links and East Links (Glen Club) of North Berwick.’’

While the West is fully deserving of all accolades, the Glen Club shouldn’t be overlooked. Ask Adam Scott. He recently taped an ad for Mercedes-Benz at its signature hole, a Pebble Beach-like par-three along the Firth of Forth.

The West Links’ popularity week kept us from playing there before our pre-booked tee time. But it didn’t stop us from checking out the course. One night, we followed the path in front of the 18th tee and first green down to the Firth of Forth. In the darkness, we moved slowly; it was a scene that reminded me of “Golf in the Kingdom,’’ the mystical Michael Murphy classic.

We also walked there in daylight, but couldn’t see much more of the course. The 17th green sat up on a hill; the second tee shot seemed to ask for a shot over a corner of the Firth of Forth to a narrow fairway.

In short, the course looked challenging.

In addition, from the setup of the first and last holes to the quaint town from which it spawns, the similarities to St. Andrews were striking.

Like the Old Course at St. Andrews, North Berwick’s West Links begins with a short par-four along the Firth of Forth, which is where the right rough should be. Like the Old Course, Berwick’s 18th hole is a drivable par-four (for some people) that shares a wide-open fairway with No. 1 and is framed by its town on the right and behind the green. 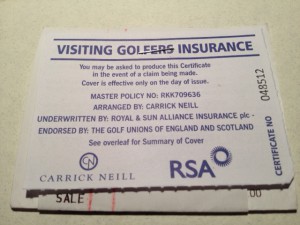 A row of parked cars, a narrow street and some charming buildings are so close to No. 18 that the West Links includes Golfers’ Insurance with its greens fees. There are also other shots where insurance wouldn’t hurt.

And like the Old Course, the West Links has famous, beloved and quirky holes, plus its share of daunting hazards. It even has townsfolk (and their children and pets) strolling around, on their way to the sea or merely taking in the sea air.

Because it’s neither an Open venue—it is an Open qualifier, though, when the tournament is played at nearby Muirfield—nor as dramatic as some remote Scottish courses, the West Links is not as widely known, of course, as the Old Course. But golfers who know the North Berwick layout adore it—and the word is spreading.

Ranked 89th in the world in 2011, a notable achievement in itself, the West Links has risen to 68th in the latest Golf Magazine ranking.

Most important, though, this 1832 layout is a Scottish classic—a scenic and fun links experience.

The 312-yard first hole provides a wide-open tee shot (long hitters won’t use driver) to set up a short iron over a small but rugged no-man’s land to a large, wind-swept elevated green.

Hitting my second shot flush for a change, I wound up just off the back of the green and settled for bogey after a long winding chip to the front pin.

Unsure how much of the Firth of Forth to bite off on No. 2, a 414-yard dogleg aptly named “Sea,’’ I wound up in the hills to the left of the fairway. Down in a valley, I aimed a 5-wood in the general direction of the green and made another solid strike.

From where I stood, I couldn’t see the shot. And neither could Liz, nor our playing partners, an Englishman named Phil and his 11-year-old son Ethan. They hadn’t even realized I’d hit.

And so, I watched as the rest of the group marched along, hoping to find my ball somewhere short of the green. When we got close enough, I realized it had dodged several bunkers and stopped six feel from the hole.

It was as good as shot as I hit on the whole trip, and I hadn’t even seen it. But that’s links golf, and I wouldn’t have traded it.

In the first of a series that would sum up the day, I spoiled things by missing the birdie putt. The seaside greens were good—not nearly as quick as the Glen Club on the other side of town—but fair and true. It just wasn’t my day for putting.

As we moved along, I realized the golf course would be a good test, but still would be very fun for a short-hitting 15-handicapper. It would not be as unforgiving as the first and 17th greens seemed to indicate during our evening strolls.  One thing I adore about links golf is that my low-trajectory shots roll and roll, so distance is less of a factor. And the choices as you near the green are multiple, another plus. It’s no big deal to putt, or chip with a 6-iron from 50 yards out.

Beyond being a wonderful golf course, the West Links—a classic front-nine out, back nine in layout—is set scenically between the Firth of Forth and North Berwick, where it’s bordered by homes and hotels, notably the Marine Hotel. If you’re not familiar with the origin of the term “links,’’ this course defines it: It’s set on the sandy, scruffy land that links the sea to the ground that’s suitable for farming and buildings. 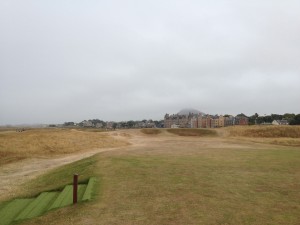 The Redan Hole, No. 15, at West Links. Yes, there is a heavily guarded green out there somewhere.

During our round, we basically had the wind at our backs on the front nine, and were into the wind on our way back in—which is the opposite of the prevailing wind. It was overcast, but rain did not happen, which was a good thing.

No. 8 and No. 9 are back-to-back par fives, and I managed to par both. On the straight downwind eighth, a mishit second shot bounded left of the fairway bunkers, but left the green in range.

On No. 9, 11-year-old Ethan outdrove me. He swings from the heels and loves the game; I took a few extra photos in case he becomes the next Nick Faldo. Going at the pin, Ethan whaled his next shot left and got caught up in some nasty grass. His hole was spoiled from there, but not his take-no-prisoners swing.

Opting for the safer route to the right, I left myself about 170 yards to the back pin. Over-swinging  I launched a hard line drive that somehow screamed between two nasty green-side bunkers, flew up the side of a hill and then turned left onto the green, finishing pin high, 15 feet right of the hole. I didn’t even mind wasting that birdie opportunity.

On the next few holes, we all struggled a bit as we headed into the wind. I shrugged and tried to steady my swing, because we were approaching the heart of the West Links, a trio of holes that give the course its unique charm.

No. 13 is a short par-four known as “Pit.’’ Not only is the green nestled in a hollow to the left of the fairway; the front of the green is guarded by an ancient stonewall that runs the length of the narrow green.

Following the yardage book’s advice, “Don’t argue with the wall as it’s older than you!’’ I bumped my second shot close, and then flipped a wedge onto the green. I’m much better betting on my prospects for one-putting than for hitting a high, soft 170-yard shot. That much, I have learned.

No. 14, “Perfection,’’ requires a strong drive on a narrow fairway to set up a blind shot over a serious hill that needs to check up onto a green that slopes back to the windswept beach. Hence the name of the hole.

My short-left drive once again called for a punched second shot. A good third shot hit in front of the green, but bounded through it, stopping perilously close to the junk between the green and the beach. A satisfying smack of the putter to tap-in range saved bogey.

No. 15, regarded as golf’s original Redan hole, is the West Links’ most famous hole. It is an architectural gem. A large diagonal green sits 180 yards from the tee. In between is a hill that must be carried followed by a large valley on this blind shot. A huge, deep bunker guards the left side, and three small bunkers can catch shots that go right.

That’s a difficult one-shotter. Add in a serious headwind and an engaging gallery of Scotsmen who were waiting to tee off on the adjacent fourth hole, another par three, and you’ve got yourself a real challenge. 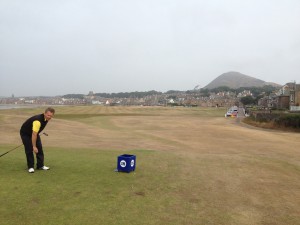 No. 18 at West LInks is a drivable par four. Houses and cars also are drivable. Thus, Golfers Insurance.

The intrepid Ethan hit the best shot in our group, crushing his driver, drawing high praise from the gallery. Father Phil went left, while Liz and I were short. I can’t recall what happened to the others; I found my ball in the deep valley in front of the green. That was basically a blind shot, but I chipped my 6-iron firmly up the hill—you can have your 56-degree wedge—and two-putted with a shrug.

Phil finished strong by driving the green of the 269-yard 18th, but missed his birdie putt after a healthy first putt.

After everyone had putted out, Phil and Ethan remained on the green, where they produced a miniature Claret Jug, and we snapped photos of them. Turns out this is an annual father-and-son competition. They drive up from England to watch the Open, and compete for their own little Claret Jug.

I can’t remember who won. But you can be sure they’re eager for the rematch.