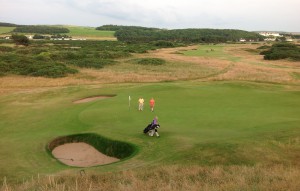 There are many mesmerizing views at Turnberry. They include the giant Ailsa Craig rock in the Firth of Clyde and the charming Turnberry lighthouse, all in the backdrop of a gorgeous hilly links course that overlooks a rocky beach as beautiful and ominous as the one at Pebble Beach.

Mixed in with these scenes is a haunting sight—the surprisingly intact remains of a long-abandoned runway that stretches for more than 1,000 yards in between fairways and greens. As a history major who wrote a thesis on the media coverage of D-Day, I found this World War II (and World War I) runway an especially solemn reminder of what previous generations faced so we could live the lives we lead. 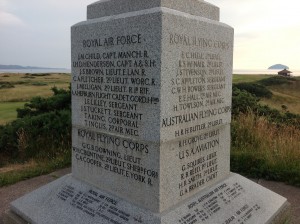 Just 38 miles south of Prestwick airport, which became and remains an important airfield because of its generally benign weather conditions, Turnberry was used as a wartime training base. The grand Turnberry Hotel that sits above the resort’s two golf courses was used as a military hospital.

Its military past is just a footnote at the modern Turnberry. Its plush hotel, which opened in 1906 as a railroad attraction on the order of Idaho’s Sun Valley or Canada’s Chateau Frontenac, is a refurbished monument to luxury. We enjoyed marvelous food and an excellent single-malt collection here. And the views from the hotel terrace, which looks down on the two golf courses and the sea, easily explain why this  location was chosen.

The opulence of the Turnberry Hotel gives a different approach than most Scottish golf experiences—and it requires deeper pockets. But the lure of those two golf courses, especially the Ailsa, which has been the scene of historic British Opens, is irresistible on many fronts.

Its Open history, which includes the 1977 Duel in the Sun between Tom Watson and Jack Nicklaus and Watson’s remarkable 2009 bid to win his sixth Open (and ninth major) at the age of 59, is special. The biggest surprise, perhaps, is that the ’77 Open was only the first of four on a beautiful and challenging course that feels so historic it seems like it’s been in the rota forever. 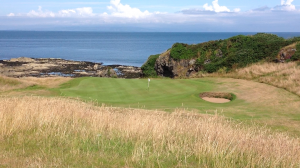 The Ailsa course, among the most beautiful in the world, is the big reason golfers come to Turnberry. For bogey players, though, the Kintyre course is fun and interesting and beautiful—and closer to Turnberry’s historic runway museum. It’s also a nice relaxed track for better players.

We almost missed the Kintyre experience. Our friends, Susan and Ron, had found a two-night American Express package that dropped the Turnberry price from really expensive to merely expensive. It included a round of golf, but when we found out it was on the Kintyre, rather than the famous Ailsa course, we switched to a twilight round on the Ailsa course for a reasonable 99 pounds.

Since we were arriving late Friday afternoon and wanted to catch a glimpse of Glasgow on Sunday, our final day in Scotland, we gave up our Kintyre tee time. Between Ron’s balky back and Liz’s disinterest in playing 36 holes in a day, that made sense.

After checking in Friday afternoon, we walked down the hill to the golf course for a drink and a snack, and a look at the pro shop’s souvenir options. It was so beautiful—Scotland’s remarkable summery weather was out in full force—that I couldn’t resist inquiring about a morning tee time on the Kintyre. After all, we weren’t teeing off until 5 p.m. on the Ailsa.

Told there was an opening for two players around 9 a.m., I jumped at it, telling Liz she could chill out with Susan—they had a spa appointment. Not knowing when an opportunity to play here would arise again, I wanted to see both courses. And the Kintyre greens fee was included in our package, which made it a no-brainer.

As it turned, she and Susan were able to visit the spa around 2 p.m., which allowed her to play both courses and do the spa thing.

We had a wonderful time on the Kintyre course.

It was a beautiful morning. We were paired with two engaging and long-hitting Australians. While not quite as close to the sea and Turnberry’s famed lighthouse as they are on the Ailsa course, the views on Kintyre also were excellent. And the playability of the course made it fun.

There’s no substitute for experiencing the ominous quirks of Turnberry’s Open course. But the Kintyre also was a treat—much like the New Course is an inviting complement to the Old Course at St. Andrews.

No. 1 is “a long, dog-leg left,’’ the yardage book says. Unable to fly the burn, I laid up on my second shot after a modest opening drive. But I didn’t mind at all when my 5-wood flew long and right of the green. Even though I failed to get up and down with the pin tucked way left, I’m always happy to be around the green.

On No. 5, a long par-four, I thought my second shot wound bound onto the green. It took an unfortunate right turn, however, and I ended up in a nasty greenside bunker that resulted in a nasty score, showing me way it was the No. 2 handicap hole. It was the only X during an otherwise solid round.

The eighth hole is a mere 280 yards, but is the course’s whimsical and beautiful signature hole for good reason. The best tee shot should travel about 200 yards to the edge of a grassy cliff. From there, a soft pitch down to a sloping green is required. Beyond the green is a rocky cove. 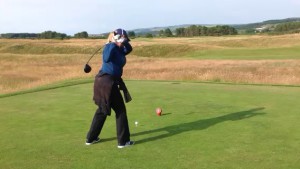 Liz: On the tee at Turnberry

Not completely familiar with the hole, the Aussies and I erred on the side of short off the tee, leaving an even blinder blind shot. But Liz, who was banging it, put herself in better position and earned a routine par. I scrambled for bogey after a skulled approach that barely dodged the rocky coast behind the green.

Didn’t bother me. The hole and the day were too lovely. I was especially intrigued by the 15th hole, which ran parallel to a runway that was used for World War II pilot training 70 years earlier. Portions of several runways remain at Turnberry, but this one is the largest.

Although an excellent player who basically was having a good round, our Aussie partner Sean caught a sand shot thin and air-mailed it, so to speak, onto the runway. I was hoping he might try a shot from there, but he maturely opted not to risk damaging a club.

`On all old runway areas,’’ the local rules state, “the ball may be played as it lies or deemed unplayble.’’

How many scorecards can say that?

The 18th hole is a bunker-laden dogleg par-five that was good preparation for Turnberry’s Open course. We were playing it downwind, and I was excited when a decent drive and a hard-hit 5-wood left me a short iron that dodged the last of No. 18’s 11 bunkers, allowing a tap-in par after a narrow birdie-putt miss. 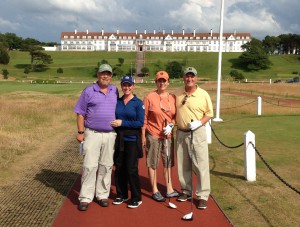 The first tee at Turnberry brings out big smiles

That finish left me wanting to play more on this beautiful day. And after lunch and a brief nap—or spa treatment, depending on your gender—that’s exactly what we did.

We weren’t the only ones playing a twilight round on this glorious afternoon. But with our 5 p.m., tee time, we were among the last, and I tried to put aside concerns that we might not finish on this crowded, testing track before daylight became scarce around 9:30 p.m.

When my approach on the short first hole magically dodged the bunkers guarding the green, allowing an uphill putt from off the green for a routine par, I thought I might be able to continue the morning’s confident play. That thought evaporated quickly, though, on No. 2, when my low second shot caught a nasty fairway bunker.

Except for some occasional rewarding moments, the round was a struggle. From a playing standpoint, it was among the most unsatisfying of our 10 rounds in Scotland.

In a larger way, though, it might have been the most satisfying 18 holes of the trip. We were on one of the world’s most beautiful golf courses, which had become even more breathtakingly inspirational because of the way the setting sun was casting its glow. We were with good friends. And for all my golf-ball-hitting troubles, there were some still some good shots mixed in with the disasters. Carrying the bag for the second round of the day couldn’t have helped things; I love doing that. It’s no wonder, though, that keeping the ball in play—out of pot bunkers and gorse—on this special course was difficult.

That said, I was pleased to get up and down on the 187-yard sixth hole, an uphill par-three to a table-top green. My blind pitch from an awkward hillside stance short and right landed gently on the fringe and rolled nicely downhill on the green to tap-in range.

On No. 10, Ron and I both were pleased to find the fairway with tee shots over the corner of the Firth of Clyde. After struggling on the Old Course at the beginning of the trip, Ron hit the ball well throughout this final round. And for all her struggles, Liz finished strong, narrowly missing birdie on the par-five 17th.

To celebrate, we pulled a flask from Liz’s bag late in the round and toasted the end of a glorious golf day on a special golf trip.

As we putted out on No. 18, we realized the fading light had just about expired. After a long glance at the Ailsa rock and the Isle of Arran off in the distance, we headed up the hill to plush Turnberry Hotel. 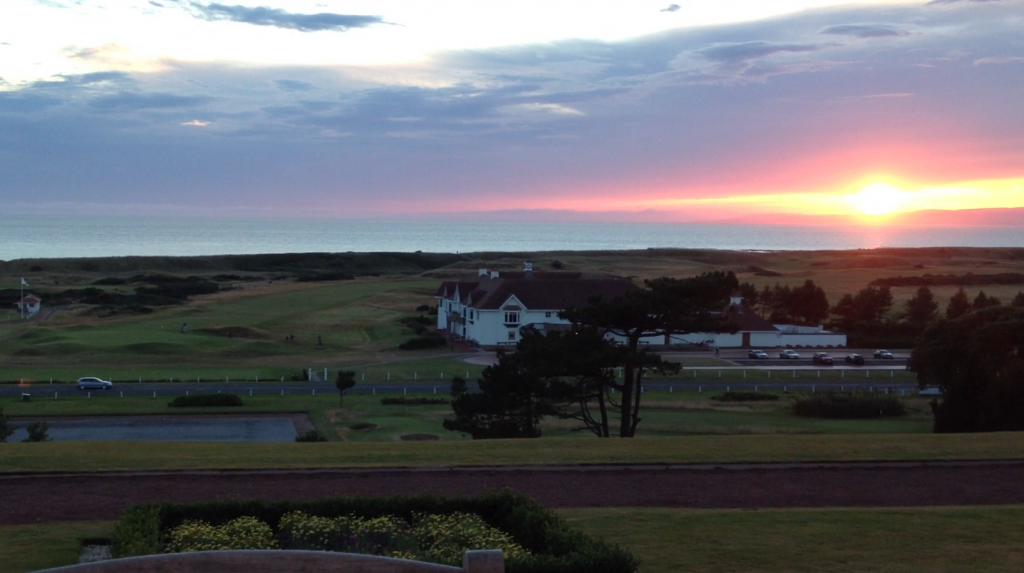 Sunset over Turnberry, from the hotel terrace