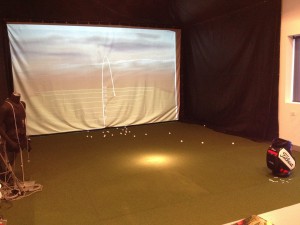 The flexibility drills are going well. I’ve been doing my own version of that sort of thing for years, which helps. Trainer Tommy Asuma has noticed, and compliments me.

“You’ve done your homework,’’ he says. “I like to start with a good foundation. Soon, though, we’ll step up the intensity.’’

I choose to look forward to that challenge, and try to bury concerns about whether I’m ready to handle it.

The way my Catalyst golf experience has evolved, I am making two visits a week. I spend an hour with Tommy on fitness, and an hour with Joe. We start with a brief, more golf-specific workout, and follow that with an indepth session making swings in front of the Trackman. The monitoring device videotapes my swings and records data such as clubhead speed and ball speed. Or lack of those things

It is very humbling. And often, very frustrating.

Joe is hammering home the point about swinging hard.

The problem, I try to explain, is that when I swing as hard as I can, my clubhead speed doesn’t always go up because the parts don’t move in unison. (Where the ball is going to go Is a side issue; we’re only doing a drill.)

So I swing as hard as I can. The results, as I expect, are not good. As a consolation, I am burning calories.

“Look at your clubhead. You’re wide-open,’’ Joe says. We look at the Trackman monitor. There’s my 9-iron in mid-backswing, so open you could land a remote-controlled helicopter on it.

As the video slowly advances, the club dips way wide, then slides back in toward the ball. Somehow, my industrious hands manage to close the face a bit at impact, producing one of my patented pop-ups.

Outside-in. Over the top. Whatever you want to call it. I call it, `Yuk.’

“Bring your club up halfway,’’ Joe says. I oblige, drawing my 9-iron to a position parallel with the ground, my hands straight back.

To me, this feels like the clubhead is about to finish in my back pocket.

How do you undo 48 years of misguided muscle memory? 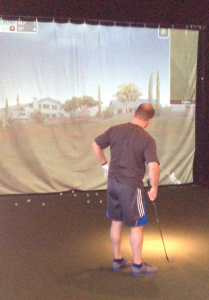 A fellow Catalyst golf enthusiast works on his chipping.

I will not get discouraged for a variety of reasons. For one, I have learned that I still like tromping around a golf course—I still carry my bag, not bad for an old guy—no matter what the scorecard says.

For another, we are going back to Scotland in June. And after last year’s inaugural trip, I know a good swing is preferable, but not necessary. The ball rolls there. I can chip from 100 yards.

And finally, as someone who has survived two major episodes of prostate cancer, I have my golf game in perspective. I don’t have to shoot par. I don’t even have to keep score, and I often don’t. If I could keep it in the 80s with a little help from my friends at Catalyst, that would be great. But I will settle for getting the club on the ball and knowing where it’s going to go.

I am coming off of 40-to-50 radiation treatments last fall to finish a job that was started by a prostatectomy two years ago. No complaints. The radiation was relatively low-level; I still carried my bag for desultory autumn golf during the treatments. And if I felt fatigued when some promising rounds ended feebly, who’s to say that was due to radiation?

That’s another point where my goals and a comprehensive golf-fitness approach intersect. No matter what the results are with a golf club, progress in the fitness area is assured—and that’s a major concern.

Although I weathered the radiation, which ended in mid-October, without major issues, I have noticed since then that my hips and legs don’t work as well as they used to. I’m guessing that having your torso zapped five days a week for two months could have contributed to that.

So bring on the hip and leg exercises.

Hitting a golfball better would be good thing. Going down the stairs in the morning—and getting out of a chair at night—without effort and without creaking also would be good, an even better thing in the long run.

I feel weird even talking about this stuff. It’s time to move on. Time to use this improved flexibility to swing harder.