First hole at Ardglass. . . bite off as much rocky coast as you want.

The first tee at Ardglass provides one of the finest views in links golf. From the medal tee, the opening shot must fly over a rocky corner of the Irish Sea straight uphill on a diagonal to a bumpy rolling fairway.

Although the hole is listed at a mere 335 yards from the medal tee, the opening shot appears to go on forever. Add in that players must decide how much cliff to scale, and what club to use, and it’s a lot to ponder.

From there, the approach to an elevated green, where little besides the flag can be seen—and Ardglass certainly starts with a major challenge.

The second hole is equally demanding—a 167-yard par-3 across another chasm to a slightly uphill green surrounded by imposing mounds. 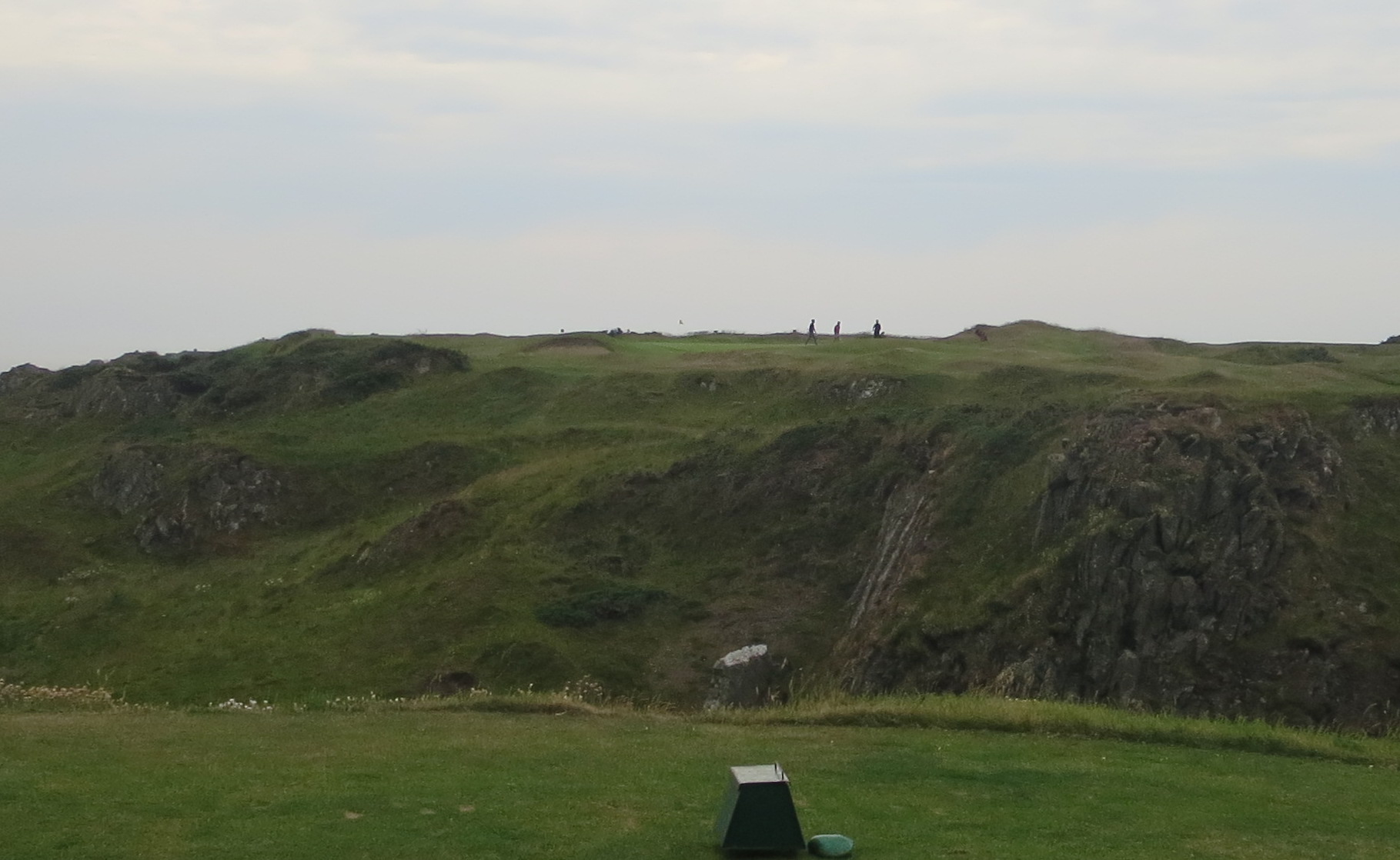 No. 2 at Ardglass is a demanding 160-yard par-3 named Howd’s Hole. Avoid that chasm/hole to fully enjoy No. 2.

But don’t be fooled. After its visually daunting start, the hidden gem on the east coast of Northern Ireland that is Ardglass becomes a fun and beautiful experience.

From the third hole on, the peril decreases. And the views from the high perch of this under-rated layout, which opened in 1896, are breath-taking.

Ardglass is a golf course you may not have heard of. If you’re going to play in Ireland, though, you ought to know Ardglass.

From its ancient clubhouse, whose roots and walls go back to a castle from the 1400s, to its intimidating but stunning first hole to its inviting collection of holes that sit on a plateau above the Irish Sea, Ardglass is a joy. Not far from Royal County Down, it’s a fine test that doesn’t feel obligated to punish every mistake.

Here’s a fly-over look at Ardglass, from the course’s website, http://www.ardglassgolfclub.com.

When we arrived at Ardglass for our second round of Irish golf, I was a bit overwhelmed. The Ardglass clubhouse, billed as “undoubtedly the oldest building in the world to be used as a clubhouse,’’ just oozes history.

But that first shot from the medal tees looks so ominous that given my shaky right knee and a back twinge, I was seriously wondering if I’d be able up to the challenge.

After watching strapping young lads launch their tee shots over the rocks with mixed results, though, I saw an older gentleman—one of my vintage—tee off from the green tee. This was still an uphill task, but not nearly as daunting.

I warily eyed the buggy—or electric riding cart, as it known in the States—sitting outside the pro shop. Ordinarily, I consider walking an essential part of the links-golf experience. In three previous trips to the British Isles, I had never taken a buggy. I didn’t even know they were available.

But given my balky knee, the cart looked like an acceptable compromise.

The Ardglass pro, Paul Vaughan, could not have been more encouraging. Soon, Liz and I were standing on the first tee. Swinging easily, I popped a drive right down the middle. Staring up at the first green, tucked between the hills, I hit a clean approach to the back of the green and two-putted for a routine par.

On the second hole, a little hybrid kicked off the hills to the right of the green, to the back fringe, setting up another two-putt par.

This wasn’t so bad for an injured old guy.

The rest of Ardglass was a treat. Tee shots bounced around bumpy fairways, approaches rattled onto greens, putts broke in strange ways.

No. 10 at Ardglass is a scenic par-3 that drops sharply to a wind-swept green.

The start of the back nine, a revamped stretch, was especially interesting. No. 10 and No. 12 are serious downhill par-3s, and No. 11 is a challenging par-5 that falls off to the sea on the right.

All around us, the views were splendid. And the other golfers could not have been more friendly.

On the back nine, we played through a group that included a pair of guys from Rockford, 90 miles northwest of Chicago. They were in County Down for the wedding of a cousin’s daughter, and we shared a few pints in the ancient clubhouse bar after our round.

As we loaded up our car after the round, we talked to a woman who was just heading out to the first tee at 6 p.m.

That’s another appeal of Irish golf. In the summer months, there’s plenty of light to play golf until 10 p.m. 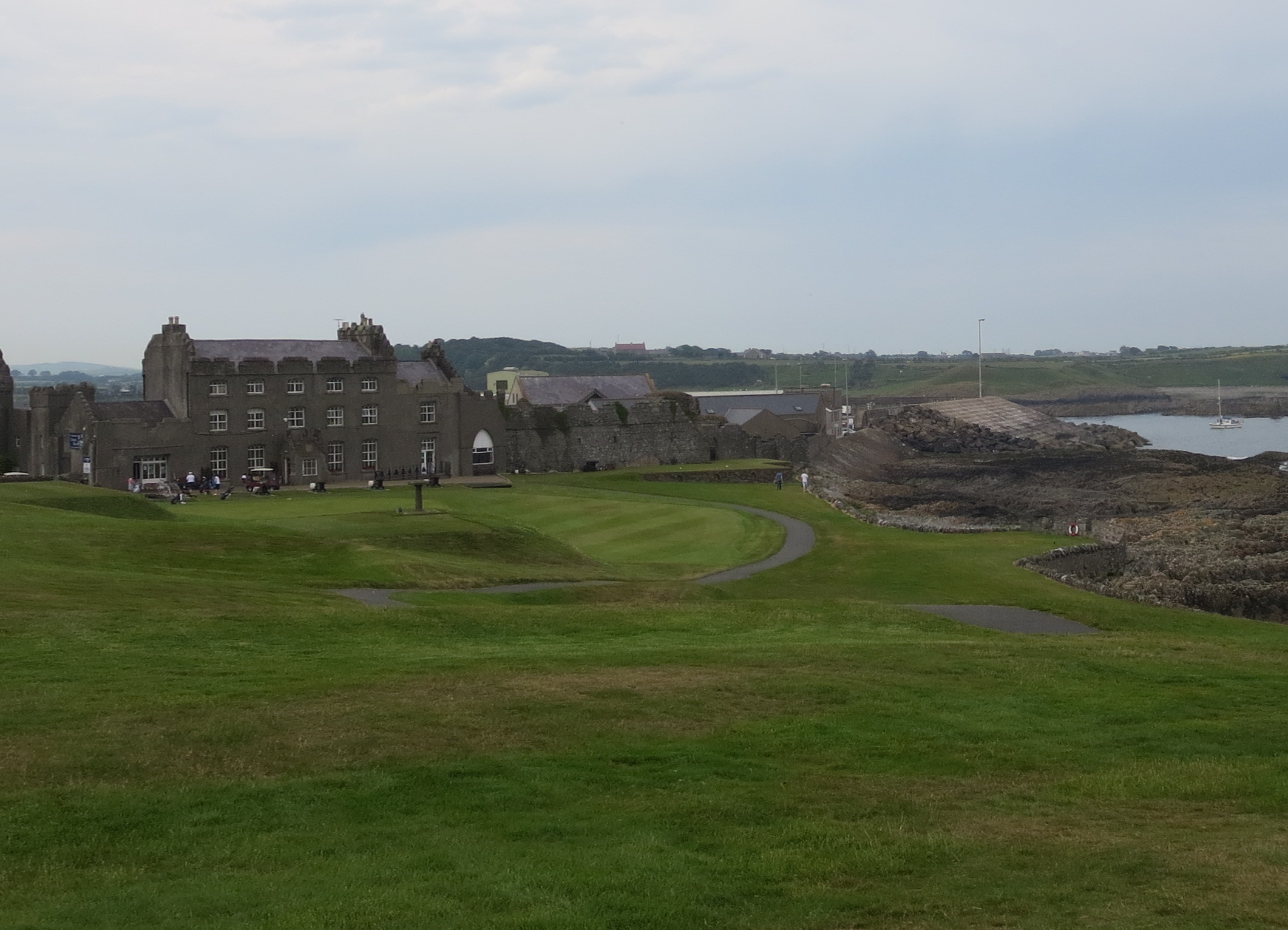 Ardglass’ daunting first tee lies to the right of its ancient clubhouse. The first green and 18th tee sit on the hill above the first and final fairways.

The 18th hole, a downhill par-4 with a severely sloping left-to-right fairway runs adjacent to No. 1. With the town of Ardglass beyond the golf course and clubhouse, it is a scene reminiscent of St. Andrews.

Ardglass is definitely on our play-it-again list. We’ll also try to leave time to explore the quaint little fishing village that is its home.

For more information about Ardglass, http://www.ardglassgolfclub.com/