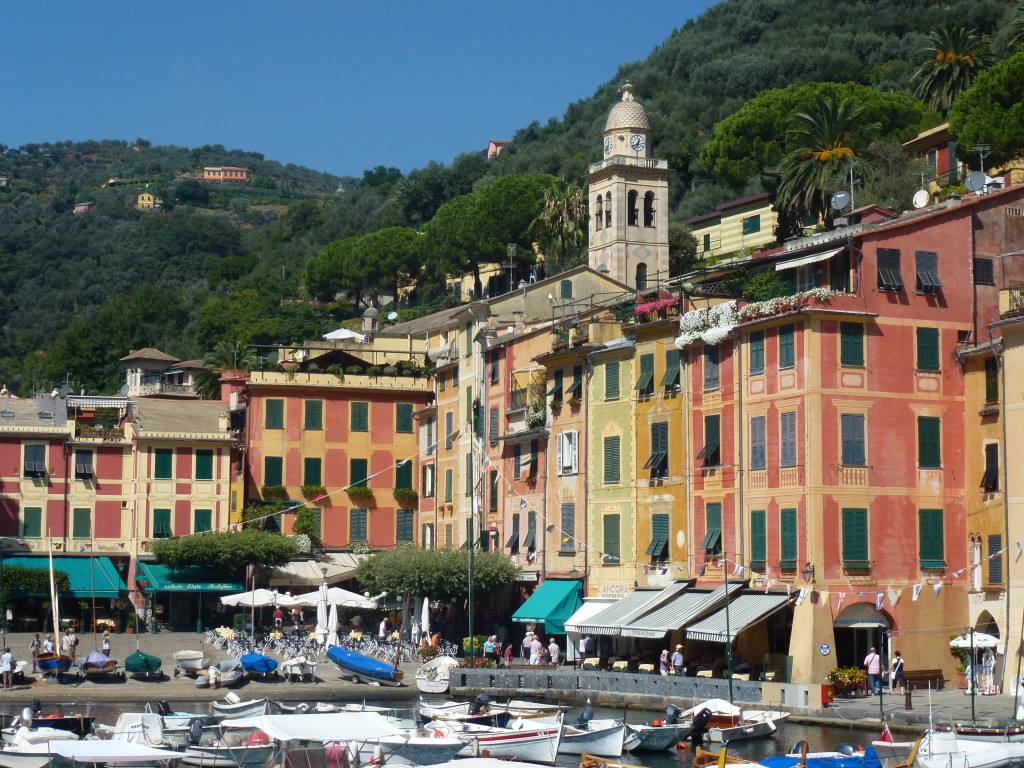 SANTA MARGHERITA, Italy — We took the morning train from Rome up the Mediterranean coast, arriving by noon in this quaint Italian Riviera resort.

I’ve always wanted to write a sentence like that. And it lived as good as it reads.

Although Portofino, just up the road from Santa Margherita, was a popular jet-set destination in its heyday, the Italian Riviera doesn’t have the same cachet today as Nice or Cannes in France. It’s smaller and less glamorous in the modern-day sense.

The Italian Riviera is a delight that mixes swimming, ferry-boat hopping, lounging and hiking amid jaw-dropping seaside-village architecture with inviting small restaurants and cafes.

At the Santa Margherita train station, even though our destination was not far, we opted to hop into one of the overpriced taxis for the short trip to the stately Grand Hotel Miramare.

Grabbing a quick lunch on the terrace next to the Grand’s gorgeous saltwater swimming pool, we were immediately introduced to one of the social classes that have holidayed here for decades.

When we sat down, we exchanged pleasantries with a middle-age British couple, who traded witticisms about the nature of marriage worthy of an old-time movie.

“I still don’t know why your father didn’t leave that to us,’’ we later overheard the husband telling his wife.

After lunch, we found deck chairs overlooking the Mediterranean across the street at the hotel’s immense waterfront layout, which features loungers and a cafe overlooking a small beach and piers. The Mediterranean was perfect for swimming on this warm September day. And the view of the harbor, plus brightly colored structures woven into the hills that rise up from the sea, was exceptional.

The views from the rooms of the Grand, which was converted from Gatsby-esque mansion to luxury hotel more than a century ago, are equally marvelous.

The town of Santa Margherita is dotted with trattorias that overlook the harbor. Put some freshly caught mussels and clams over linguine with a well-crafted marinara sauce, add a glass of your favorite wine, and it’s easy to see why this resort area has been irresistible for generations.

In the next days, we traded the pampered, upper-crust resort experience for more contemporary tourist experiences. The ferry ride to Portofino was quick, and that was probably a good thing. It was jammed with day-trippers from a cruise ship, plus hikers taking a day off from the splendor of Cinque Terre, an hour away by train.

The ride to Portofino can be measured in minutes. But as the ferry approaches this secluded town, which has been valued for its protected harbor since the days of the Roman Empire, it’s like a trip back in time. Even the Portofino photos of a trench coat-clad Humphrey Bogart and Ava Gardner in a billowy dress ooze history.

It’s still a popular high-end resort, as evidenced by the abundance of chic and expensive jewelry and clothing boutiques. But it’s also a photographer’s delight.

As we pulled into Portofino on the glistening water, I looked up at the ageless buildings — with their weathered green shutters accenting all manner of orange, beige and cream-colored buildings — and said, “Where have I seen this before?’’

The answer is, in representations at any number of little Italian restaurants back home. But as the song goes, “There’s nothing like the real thing.’’

First, we worked up a hearty appetite strolling through the hilly town. I was curious to see what those buildings that rise straight up into the hillside look like from behind. The answer: Although they are four and five stories high, their rear entrances were on the third or fourth floors. So the residents of what looked like modest living quarters would go downstairs to get to their lower rooms.

Then we headed to the Excelsior Cafe for a little salad, pizza and a view of the busy little harbor. As with most Italian pizzerias, the feature here was a small, delicate thin-crust version adorned with all kinds of interesting options, from eggplant to prosciutto.

The next day, we hopped the train to Cinque Terre, a collection of five ancient and unspoiled towns that are carved into the steep, rocky coast along the Ligurian Sea, as this section of the Mediterranean is known.

Connected by hiking trails that have been designated as a national park, the Cinque Terre towns each have their own little flavor and are a delight to explore and photograph.

We had originally planned to stay in the Cinque Terre, but it’s an immensely popular tourist area in the fall — we were bucking the Anchovies and Olive Festival — and its small hotels and modest bed-and-breakfasts fill rapidly. The crowds, combined with the complaints we overheard about the lack of air conditioning, not to mention the steep walks in these nearly autoless villages, reassured us about staying in the lap of luxurious Santa Margherita.

That said, the Cinque Terre is not to be missed. From one end to the other, it can be hiked in as little as four or five hours, but there are also frequent ferries connecting the towns. With so much to see, we started with the easy walk from Riomaggiore to Manarola, also known as the Via dell’Amore because couples pledge their love by placing padlocks in the fencing, or any spot that will hold a lock.

After a stroll in Manarola, we upped the ante and wended our way along a path through the vertical vineyards above the village (thank you, Rick Steves). At lunch — another excellent round of clams and mussels over homemade pasta — we watched as a Manarola mariner lowered his small boat into the water by pulley from a cliff.

From there, we hopped the ferry to Vernazza, which was bustling compared to Manarola. In contrast to chic Santa Margherita, the Cinque Terre is immensely popular with no-frills hikers, including many Germans, who share my affection for beer, even in this land of vineyards.

We bumped into several couples from South Carolina who had rented a villa in nearby Tuscany. Trouble is, they liked Cinque Terre so much they ended up staying on the Ligurian coast for a good portion of their visit.

The beer was cold. The sea was warm. The sun was bright. The shutters were green.

When it comes to the Italian Riviera, what’s not to like?