ST. ANDREWS, Scotland—We arrived at the home of golf on a Friday, energized and excited—and filled with uncertainty.

I had booked a tee time for the Duke’s course, which sits in the hills above St. Andrew’s, for Sunday, when the Old Course is closed. For Saturday and Monday, however, we had no tee times—because I wanted to keep our Old Course options open.  People had told me it was possible to arrive in St. Andrew’s without a tee time and still get on the Old Course, but I’m not sure I believed them. Certainly not on the weekend before the Open was going to be played just two hours away.

Fingers crossed, we put our names into the 48-hour ballot for Monday, which would be our last chance. I considered the other last-minute option on Saturday, to arrive at the Old Course at 6 a.m. and wait to be plugged into an opening, but ruled it out, figuring my wife and I would have little chance of playing together that way. We didn’t really want to play on hallowed ground without a warmup round, either.

And so, on Friday we were able to book a late Saturday morning tee time on the New Course, which made more sense as our first round in Scotland. We just walked into the St. Andrews Links Clubhouse, the modern building just beyond the first hole of the Old Course, where the staff was helpful and cheerful. And then, before dinner on Friday, we headed to the Himalayas for miniature golf, St. Andrew’s style. 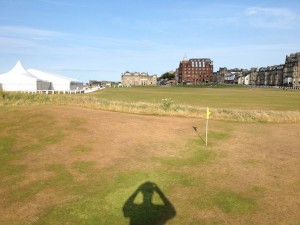 The view from the Himalayas takes you right down the Old Course’s first fairway.

Calling the Himalayas miniature golf doesn’t do it justice. It is 27 holes of sheer delight—putt-putt golf over slick wildly undulating mounds of grass for a mere two pounds, putter and golfball included. And it’s adjacent to the first green on the Old Course, where you also can soak in the Swilcan Burn, the R&A building and players on both the first and 18th holes, all set against the dramatic architectural backdrop that’s familiar to golfers who have marveled at Opens played at St. Andrew’s.

We also took a long walk along West Beach, the inspiring shore that was used so dramatically in the film “Chariots of Fire.’’ Scotland was in the midst of a record heat wave when we there—temperatures reached the 80s at times—so the beach was well populated.

After a memorable first evening that included a drink at the Golfer’s Corner Lounge Bar at Dunvegan, the classic memorabilia-filled golfers’ pub—St. Andrews Ale, best Scottish ale we ran across—and dinner at Playfair’s—try the sea bass—we woke up rested on Saturday morning and seemingly ready for the amusingly named New Course, which opened in 1895, about the time the very first old courses of the United States first began greeting golfers.

Practically shaking with excitement, I teed up a ball and promptly hit a one-hopper to the second baseman, finishing in fescue. Teeing up another ball, I hit a ground ball that barely reached the shortstop, ending up in untenable prickly gorse.

Luckily, I found the first ball in the fescue—hacked it out on the way to jittery double bogey on the 299-yard hole.

Another double bogey followed on the 367-yard; my bump-and-run kept going and going. On the 511-yard third hole, though, I made a par-five. Loved the way the driver and fairway wood ran and ran. The little chip on the third went slightly over the green. But two putts from there, and I was feeling very Scottish.

The jangled nerves subsided, my wife and I both settled into decent rhythms and enjoyed the New Course. It is most enjoyable. Unlike the often perilous Old Course, the New Course has many of the features of its more famous big brother, but without the fangs.

Even the ninth hole, an ominous 225-yard par three that runs parallel to the Eden Estuary at the far end of the St. Andrews property, turned out to be whimsical. The green was a big bowl that caught long balls and fed them right back down toward the hole.

The 10th was one of those blind tee-shot deals where you hit your drive over a post and keep your fingers crossed. My drive missed the fairway but was findable. Thanks to the firm ground, I was able to hack it all the way to the right fringe. The three-putt for double bogey is what hurt.

On the 331-yard No. 11, after dodging the four greenside pot bunkers to set up a birdie putt, I took a timeout to tape my wife’s attempt to get out of one of those diabolical hazards.

She didn’t do well. (My turn would come soon.) But we thought the video turned out to be very fun.

Not surprisingly, our swings became less effective as we headed closer to the clubhouse. My wife had difficulty keeping her full shots in play.

On the other hand, I was hitting the ball pretty well by the modest standards of a 15 handicapper. Although I was getting to the green, or near it, I was having trouble chipping and putting, which is usually my strength.

It was a bit frustrating, but wonderful at the same time. To be putting on these magical greens—and sometimes, putting from 30 or 40 yards off the green—amid the stark beauty of the New Course, a 19th-century gem—took the sting out of three-putting 14, 15 and 16 for bogey.

I was actually very excited about hitting the green on No. 16, a 416-yard par four, because I had pushed my drive far right, onto the third fairway. From there a well-struck 5-wood rolled onto front of the large green, in full view of players on the third as well as the group just leaving the 16th. I looked like I knew what I was doing.

Exhilarated and thrilled after our round, we walked back to the Scores Hotel, where we were staying. It is basically across the street from the R&A building, and we could see a snippet of the first tee of the Old Course from our bay window. Unbelievable.

The hotel was about the price you’d pay for a room in midtown Manhattan—not cheap—but absolutely wonderful. We also had a marvelous view of the Eden Estuary, where the tides seemingly roll in and out for hundreds of yards.

We made a quick run to Luvian’s, a liquor store that has a good selection of single malts, and picked up a bottle of Glen Dronach, an easy-to-drink 15 year old.

Our friends, Susan and Ron, had arrived that day, and we gathered for a wee sip before going out to dinner.

Before we left, I telephoned and found out we had successfully landed a tee time for the Old Course, at 7:50 a.m., via the 48-hour ballot.

That was something to toast.