The Hammock Beach Resort, located on an unspoiled barrier island in Palm Coast, Florida, just south of the Spanish Colonial city of St. Augustine, offers two golf courses designed by Jack Nicklaus and Tom Watson that have hosted PGA Tour events in the past and which offer distinctly different challenges. 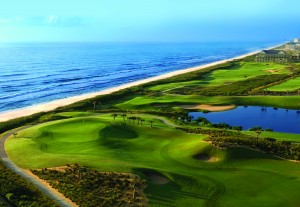 The Nicklaus-designed Ocean Course, which winds through residential neighborhoods, features six holes with views of the Atlantic Ocean, including a pair of long finishing par-4s on each side that run parallel to the ocean, probably gets more publicity and play since it is located near the resort.

Ben Crenshaw, now an architect himself with Bill Coore, once called the Ocean Course the best Nicklaus design he had ever played when the Champions Tour’s Ginn Championship was held there in 2007 and 2008. It’s not as penal as some of his earlier work, but still is very challenging, especially the closing four holes called “The Bear Claw.” 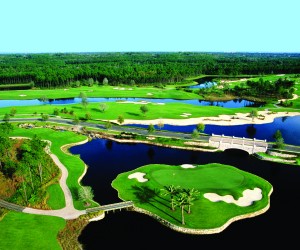 The resort’s Watson’s Conservatory Course, located eight miles away, can be stretched to 7,776 yards, making it the longest in Florida with a course rating of 78.2. It could easily host a PGA Tour event as it did with the ill-fated Ginn sur Mer classic in 2008. The financial collapse of Bobby Ginn was the reason the touring pros did not return, not the quality of the course.

The Conservatory, built on rolling links-style terrain with dunes and marshes, is more difficult because of the 140 bunkers that Watson added. You usually have no chance to get home from the fairway bunkers and just have to wedge out and hope to save par with a one-putt. Like its neighbor to the north in Jacksonville, TPC Sawgrass, there’s an island green on the 8th, which plays 199, 168, 145, 113 and 97 yards.

Guests will enjoy the accommodations and ocean views in 320 beautifully furnished condos, including a 20-room lodge, and all the other amenities one expects at a four-star resort, including a personal concierge that greets them on arrival.

Hammock Beach Resort is now part of the Salamander Collection’s Grand Resorts of Florida with Reunion Resort in Orlando and Innisbrook Resort near Tampa.