“But make no mistake, the mesmerizing scenery masks a challenging course–one well worth conquering,” said director of golf Jose Quesada, talking about the back tees at 6,698 yards and a course rating of 73.4 and a slope of 145. 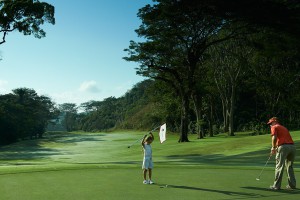 However, from the whites at 5,836 yards, it was a very fun experience for me after I rolled in a 45-footer for birdie on the par 3 10th, our first hole, and added another birdie on the par 3 16th in shooting a 37. The par 4 12th is the most difficult, but you can take a risky shot over the trees on the left and have a short iron approach to the green rather than a long iron or wood if you take the safer route to the right.

We skipped the par 5 No. 1 hole, but I had four pars on the front side played through the edge of the rainforest. There was a large double green on Nos. 3 and 5. Sandwiched in between was the signature hole, a good par 5 featuring a landing area guarded by water and the forest and a small green guarded by a pot bunker in front. A 300-year-old tree stood in the forest behind the green.

Looking back to my last visit 13 years ago when I blew a three up advantage in losing to host pro Phil Krick in the Costa Rica PGA Match Play Championship with three straight bogeys and a drive OB on Nos. 14-17. I made a mental note to myself to concentrate more and played the same four holes in one under this time. Of course, it was from shorter tees, but still a satisfying accomplishment for a 72-year-old with a titanium knee.

While most of the first 14 holes except for the par 3 10th take you through the rainforest, the last four play in an open area with views of the ocean, including a third shot on the 15th and a tee shot on the 17th over a river leading to the ocean. To the surprise of my wife and I, there was a cow feeding in the river.

The GPS system on the golf carts certainly adds to the enjoyment. There’s no excuse to not know the exact yardage. It also provides tips on how to play each hole, great for the first-timers.

I played with Christian, one of the forecaddies who double as a guide, happy to point out all the beautiful Costa Rica highlights. Better yet, they can find errant shots and read the greens, too. So take one along with you. We didn’t get to see many of the wildlife ourselves, but did see photos of a six-foot rattlesnake crossing one of the fairways and heard from Christian that he had also taken a photo of a baby black Jaguar.

Quesada reported of one instance where a golfer was surprised when a monkey picked up his ball and ran off into the woods.

An added bonus for non-golfers is the La Iguana Experience where they can take a leisurely guided tour through the jungle to interact with Mother Nature..

The Los Suenos Marriott, recognized as one of the “World’s Best” by Travel & Leisure magazine readers, occupies a palatial colonial-style building with 201 rooms nestled between the warm waters of the Pacific and the golf course, offering stunning ocean, mountain and garden views. The new Sibö Rainforest Spa & Retreat was added in 2010, but there is no longer a casino on site. The hotel is part of a 1,100-acre master planned destination resort with over 500 luxury residences, including single-family homes, lots, condominiums and lavish villas, a full service 200-slip international marina and an exclusive Beach Club for residents.

New highway 27 west of San Jose offers a very scenic drive and has shorten the trip from San Jose to 90 minutes. GPS for the auto can be helpful, but one man we met noted his didn’t work correctly. We had no problems with directions from Susan Blanks, our hostess the first two nights in San Jose.

Nearby Jaco is the most developed beach town in Costa Rica, known mostly for its nightlife that rivals that of San Jose, including casinos for those wanting to do a little gambling.