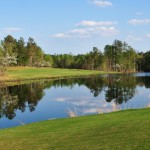 If you get to Pinehurst, make sure to add the Dormie Club to your list of must play courses. The Ben Crenshaw-Bill Coore design that reflects a return to the classic architecture of the past is open to the public on a limited basis.

While original plans called for it to become a private club when it first went on the drawing board back in 2007, I heard that the owners may be re-thinking that decision because of the state of the current economy.

Located a few miles north of the Village of Pinehurst, the course meanders through tall trees, wetlands and rolling terrain with up to 100 feet of elevation changes, quite different from its neighbor courses at Pinehurst Resort. There are no homes to distract you either.

Players are given the chances to grip and rip their drives with wider fairways where only really errant shots might end up in the woods. Bordering the rolling fairways are sandy areas with wiregrass, native grasses and pine straw, but no other rough, much like how they were back 70+ years ago.

Open for play on Memorial Day weekend in 2010, it’s in great shape except for some work being done to add fairway to the right of the wetlands on the 600+ yard 10th hole that will allow it to be played as designed until some problems arose about wetland issues.

The par 5 No. 10 reminds me a lot of the 18th on the first design of Crenshaw and Coore at the Kapalua Plantation Course on Maui. You would think at more than 600 yards, it would not be reached in two, but according to our caddy long hitters have taken advantage of the downhill slopes to do it. I even got a hybrid on the green from 250 yards thanks to that runway down to the green.

There are only two other par 5s on the par 71 course. The 532-yard sixth might be easier to reach in two than the 506-yard 17th where the green is perched high above the fairway and players have to carry a native area that some say remind them of Pine Valley.

There is a good variety of par 4s, including a pair of drivable ones at around 300 yards—Nos. 3 and 14. If a player gets on the dance floor on the first one, he still must negotiate perhaps the most severely undulating green on the course. Short hitters might be wise to lay back to have full shots into the two greens. That was my plan. One of the par 4s—No. 13 that plays across a wetlands–even goes over 500, but again plays downhill to the green. My 6-iron was long as it caught the large hill short and left of the green and took off like a jackrabbit.

As usually the case with Crenshaw and Coore designs, the greens have a lot of character, making getting approaches to the correct areas difficult—sometimes requiring hitting the ball short to run it up instead of flying the ball all the way to the green.

The course plays firm and fast, making it play shorter than the actual yardage. However, a fourth set of tees between the 6,355 that Jeff Thoreson of GolfStyles Magazine and I played and the forward tees of 5,189 might be something to consider. It plays at just under 7,000 from the tips.

To be honest, Thoreson and I both commented that Dormie was probably more fun to play than the Crenshaw-Coore restored Pinehurst No. 2 that we had played the day before, especially since we had a very knowledgeable fore caddy.

One Response to “If in Pinehurst, don’t overlook Dormie Club”